Starting with macOS Sierra, you can now access the Siri voice assistant right from your desktop without having to use one of your mobile Apple devices. But of course, by default, Apple clutters up both your Menu Bar and Dock with shortcuts for Siri.

If you followed our recent tutorials for setting up a Siri keyboard shortcut or enabling “Hey Siri” on your Mac, then you don’t really need those clickable shortcuts anymore, so here’s a quick tutorial for removing the redundant shortcuts.

Removing Siri from the Dock

If you’ve been using the Mac platform for a while, then you’re probably already very familiar with removing icons from the Dock.

All you’ve got to do is click on the icon and drag it a few inches away from the Dock until you see the “Remove” label. When you do, simply release your click and the icon will disappear.

You can still access Siri with a keyboard shortcut, if you set one up, or from the Menu Bar icon. Additionally, you can easily put the Siri icon back on your Dock by dragging the app icon from your Applications folder back into the Dock.

Removing Siri from the Menu Bar

Unfortunately, there’s no such thing as a back and white Siri icon for your Menu Bar, so you’re stuck with one oddball colored icon and the rest are lacking any color at all. Looks weird; doesn’t it?

There are two ways you can remove the Siri icon from the Menu Bar, so we’ll show you both ways below.

The easiest way to remove the Siri icon from your Menu Bar is to hold down on the Command ⌘ key on your keyboard while simultaneously clicking and dragging the icon a few inches away from the Menu Bar.

When you do, you’ll see an X icon that indicates you’re about to remove the icon:

When you see this icon, simply release your click and the icon will be removed from the Menu Bar.

Method two: from your Mac’s settings

The other way to remove Siri from your Mac’s Menu Bar is to follow System Preferences → Siri and un-check the Show Siri in menu bar option: 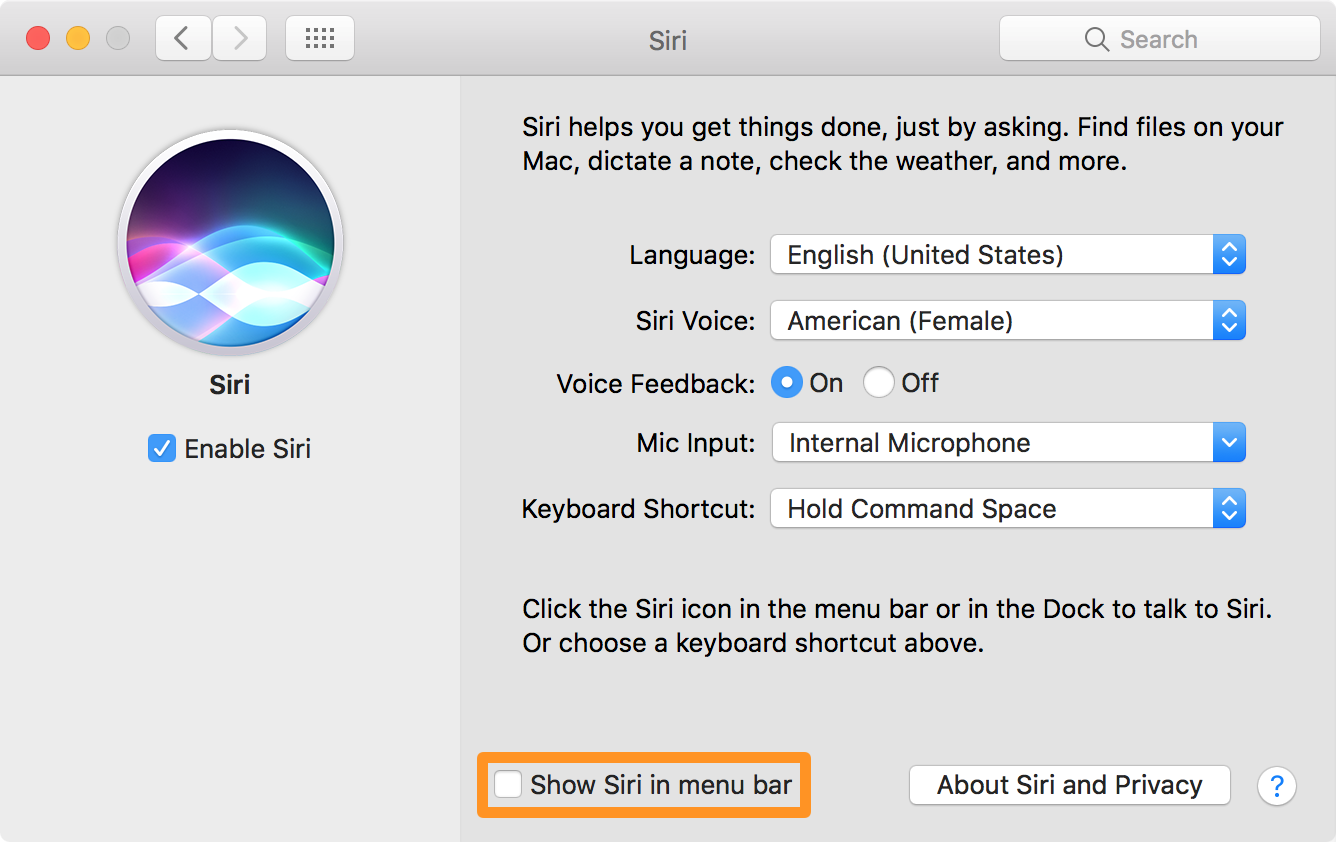 Even though you’ve removed the Siri icon from your Menu Bar, you can still access Siri from the Dock icon (if it’s still there), or with a keyboard shortcut you set up.

You can easily put the Siri icon back in the Menu Bar if you want to by putting a check mark back in the Show Siri in menu bar box under System Preferences → Siri.

Have you hidden the Siri icons from the Dock and/or Menu Bar on your Mac yet? Share in the comments.