With Secret Conversations in Messenger, Facebook offers support for end-to-end encryption, giving you peace of mind knowing that any sensitive messages with friends and family cannot be deciphered by a third-party. These encrypted chats rely on a device key that ensures only you and the recipient can see the message.

You can verify the device key to confirm that the messages are end-to-end encrypted, set a timer to have secret messages disappear from the conversation and so forth.

In this article, we will show you how to set up and use Secret Conversations in Facebook Messenger.

Secret Conversations are currently available in the Messenger app on iOS and Android. They do not appear on the Facebook chat at www.facebook.com, m.facebook.com or www.messenger.com. They’re also only visible on the device where you create them and the device the recipient uses to open the conversation.

Only one device at a time can send and receive secret messages. So if for example you enable Secret Conversations on your iPhone, any secret messages on your other devices will not be visible.

What you can send

Encryption imposes certain limitations pertaining to the types of messages you can send or receive in Secret Conversations. You can send the following in an encrypted message:

How to start a Secret Conversation

1) Launch Facebook Messenger on your iPhone, iPad or iPod touch and tap the Chats tab at the bottom.

2) Tap the New Message button to start a conversation, then tap the Secret button in the top right. Select who you want to message.

Tip: You can also tap an existing conversation, then tap the person’s name at the top and select Go to Secret Conversation. 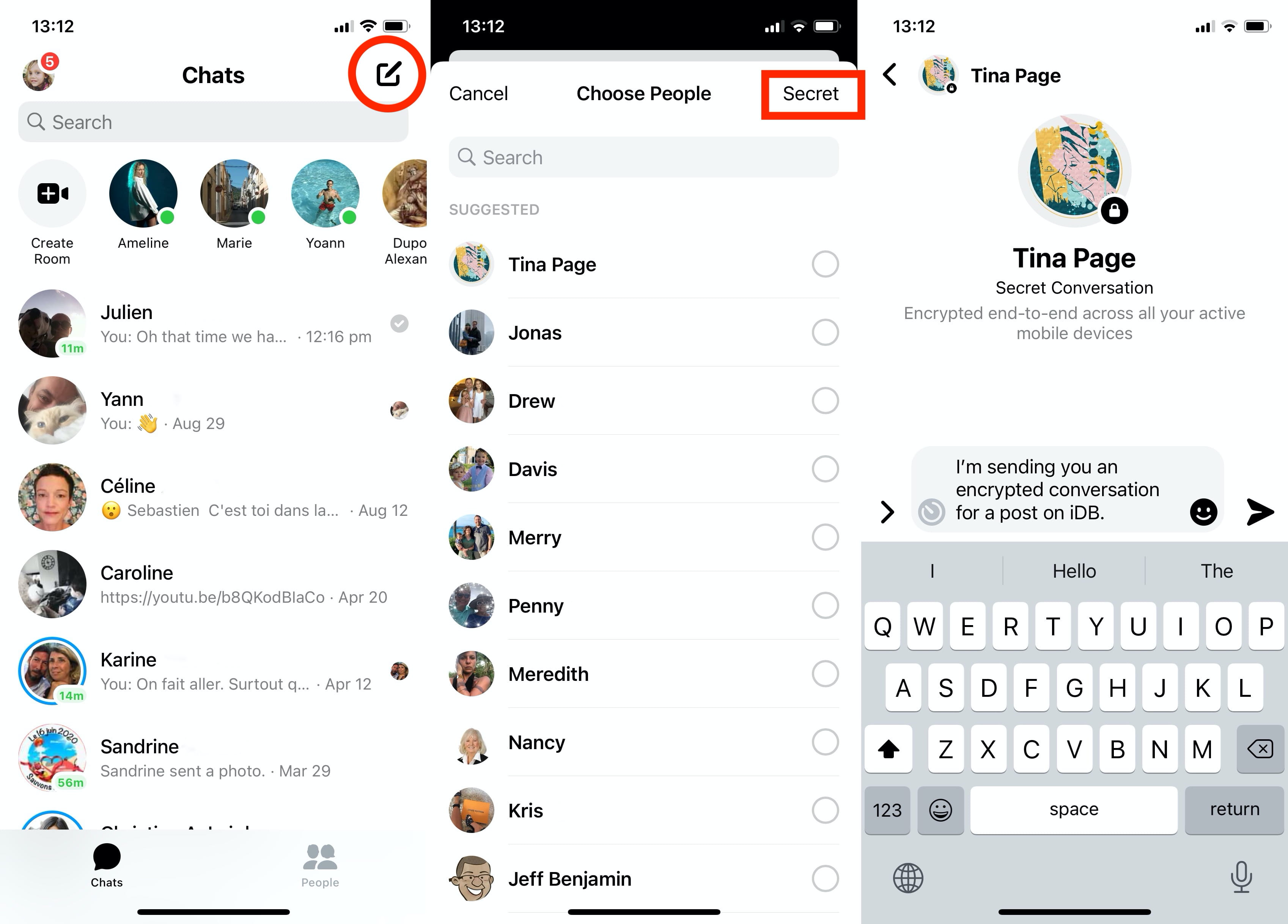 3) Type your message, then tap the Send button.

A padlock icon along with a message saying “Encrypted end-to-end across all your active mobile devices” by a person’s Messenger profile image at the top denotes that you’re engaged in a secret chat with them.

You may see two different conversations in Messenger if you’re in a secret conversation with someone you already have a conversation with. Keep in mind that the person you’re messaging could still make a screenshot of the message and share it with others without your permission.

Messenger allows you to set a timer to have your messages disappear from the chat.

1) Launch Messenger and start a new Secret Conversation like your normally would, or tap one of your existing ones.

2) Type a message and hit the Timer icon in the text box.

3) Set a timer and choose how long you wish the message to remain visible for before it disappears from the conversation. When you’re ready, tap Set Timer. 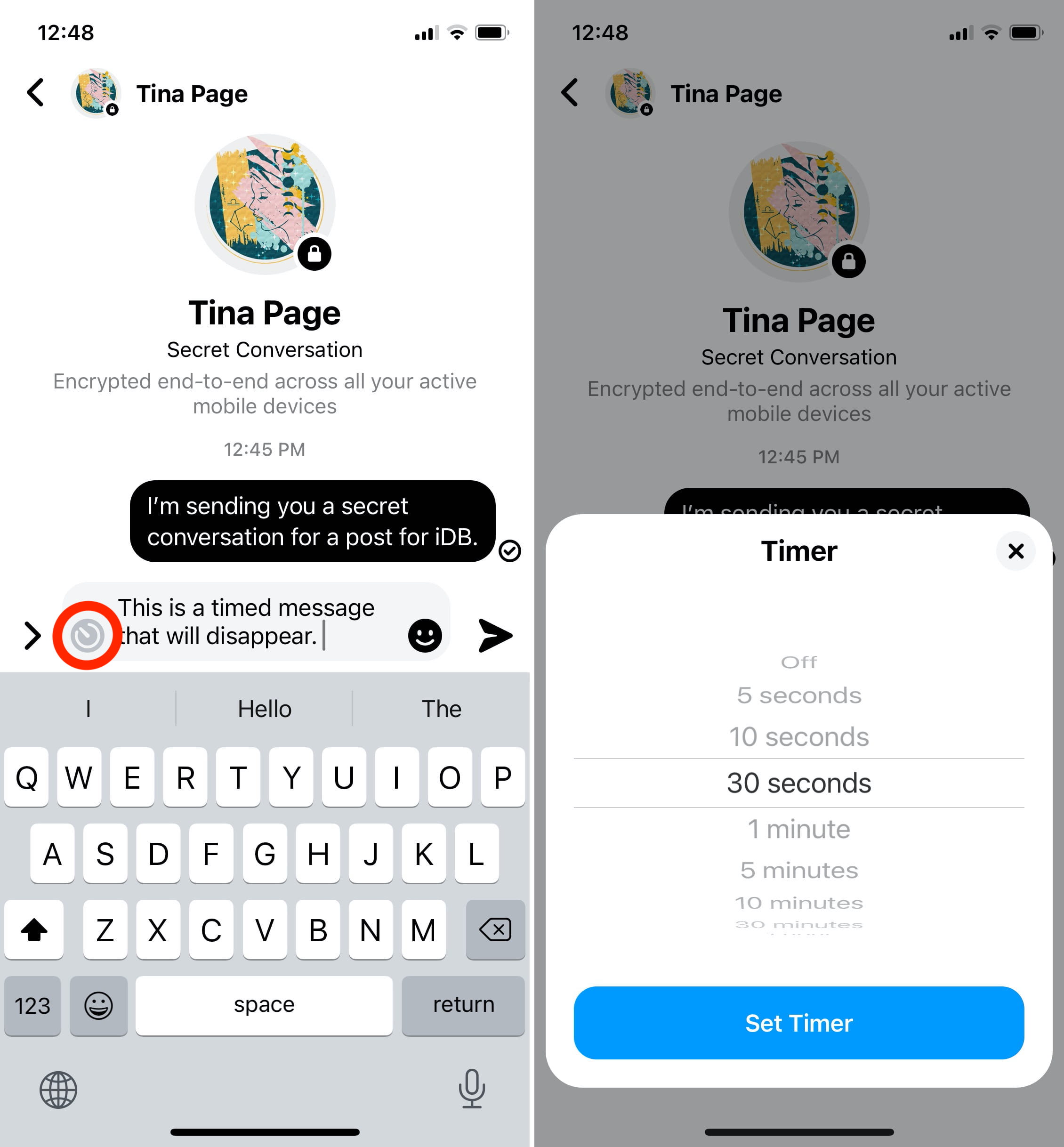 4) Tap the Send button to send your auto-disappearing message. A message indicates that your secret message will disappear after the period of time you just selected has passed.

Verify that your conversations are encrypted

In an encrypted chat, both you and the recipient have a device key which can be optionally used to verify that the messages are indeed end-to-end encrypted.

1) Launch Messenger and tap a Secret Conversation with someone.

3) Tap the Device Keys option and compare it with the other person’s device key. You may compare by sharing screenshots or asking the other person for the last 6 digits of their key, for instance. If you can verify that the device keys match, your conversations are encrypted end-to-end.

You don’t have to compare device keys if you don’t want. Indeed your secret messages will still be encrypted if you skip this optional verification.

When you change the device used for Secret Conversations, your previous secret messages will no longer be visible on your old device or your new device.

Delete a Secret Conversation from your device

Messenger only lets you wipe clean one encrypted chat at a time.

1) Launch Messenger and tap the Me tab at the bottom.

2) Swipe from right to left on the conversation you want to delete, then tap the red Trash can icon. A prompt goes up warning you that deleting all Secret Conversations will permanently delete the chat from this device.

4) Tap Delete to confirm the operation or Cancel to abort the action.

Like unencrypted chats, any offending or unwanted secret chat can be reported to Facebook. You can also report auto-disappearing secret chats but only for a short time after they’ve disappeared.

Keep in mind that reporting a Secret Conversation decrypts recent messages from that chat so that Facebook’s team can review them. Don’t worry, these unencrypted messages are being sent securely from your device to the Facebook cloud.

1) Launch Messenger and open the Secret Conversation you wish to report.

3) Tap Block if someone is bothering you in a chat. Or tap Something’s Wrong if you believe the selected secret chat goes against Facebook’s Community Standards that prohibit bullying or harassment, threats, and sexual violence or exploitation.

4) Select a category for your report and provide a brief explanation of what happened. Finally, tap the Next button to report the message to Facebook.

“We won’t tell the person you’re talking to that you reported it,” says Facebook.

If you have tips you want to share about using Facebook Messenger end-to-end encrypted chats, feel free to let us know down in the comments!