Those of you who are familiar with the new iOS 9.3.3 jailbreak that was just recently patched by Apple in the iOS 9.3.4 release know that the jailbreak installs an app on your Home screen that is easily deleted if you’re not careful.

A new free jailbreak tweak called AppDelete helps prevent you from accidentally deleting apps from your Home screen, including but not limited to the Pangu app.

AppDelete is actually a pretty convenient little tweak, because it prevents you from accidentally deleting apps that you don’t really want to delete. It happens from time to time, you might have your mind somewhere else while you’re doing a little spring cleaning, and you delete an app you didn’t mean to delete, which means you have to re-download it.

For most apps, this isn’t a problem because the App Store is just a launch away, but for the Pangu jailbreak app, this means re-connecting to a computer and re-side-loading the app again because you deleted it, which isn’t always a convenient thing to do.

After you install AppDelete, you can go into the preferences pane from the Settings app. 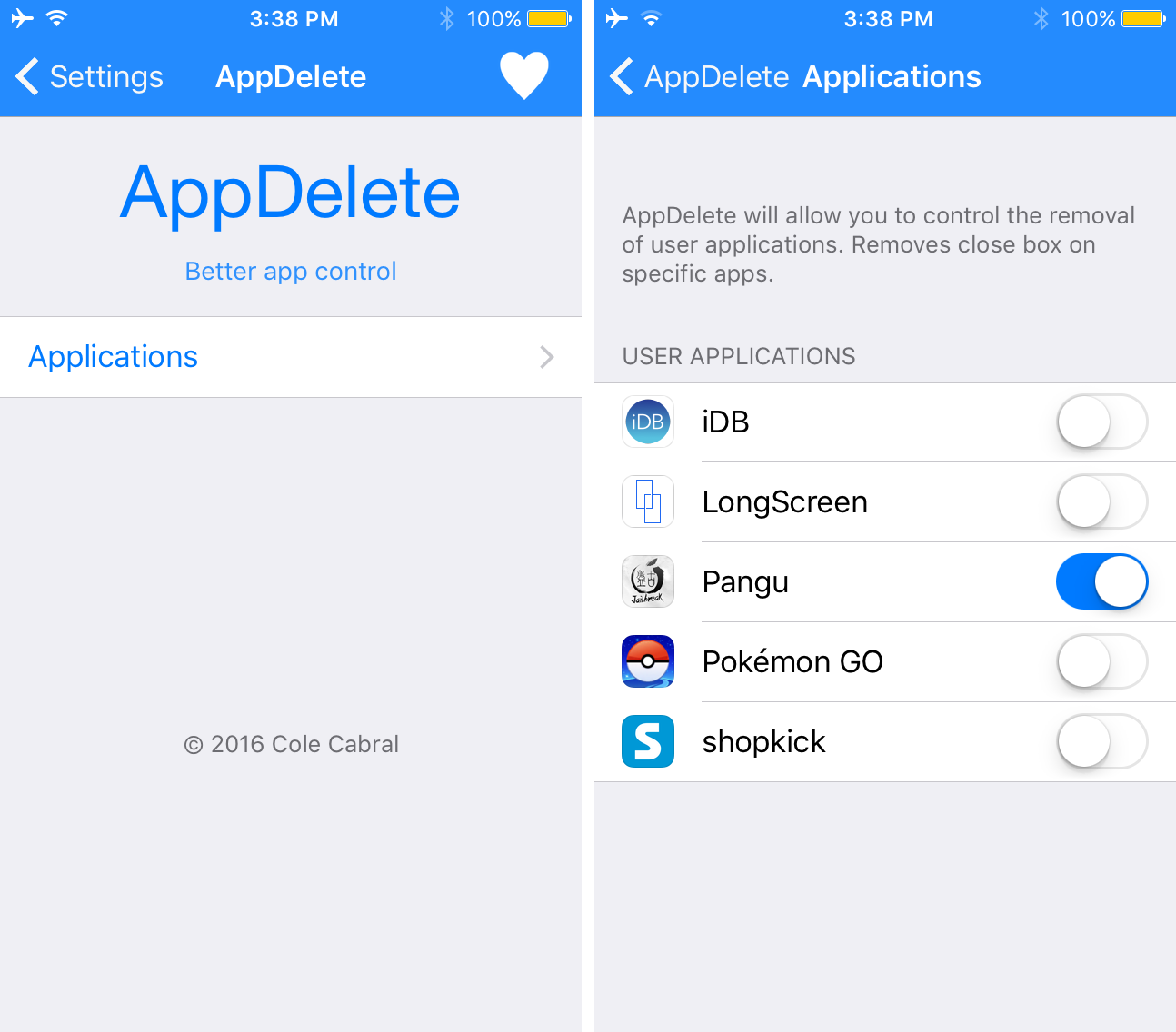 When you open the Applications cell, you’re presented with a list of all of the user-installed apps on your device. By default, they’re all turned off, and this means they can all be deleted from the Home screen by entering ‘jiggle’ mode.

On the other hand, if you turn any of the apps to the on position, the tweak will prevent those apps from ever being deleted while you’re in ‘jiggle’ mode.

The changes you make here happen on the fly, so there’s no reason to respring your device every time you change the settings.

My thoughts on AppDelete

I think that AppDelete is a must-have for those with the iOS 9.3.3 jailbreak, because it helps keep you from making the silly mistake of deleting the Pangu jailbreak app, which is an essential tool to booting semi-untethered after every reboot.

If you don’t have the Pangu app because you accidentally deleted it, you will be unable to boot semi-untethered again until after you re-side-load the app from your computer with Cydia Impactor.

This tweak is cheap insurance for that, but keep in mind that the tweak can also be used for other third-party apps that you download from the App Store, which means you can also protect those larger apps on your device that would take forever to download again if you accidentally deleted any of them.

Even if you’re not that clumsy, if someone else picks up your device, this tweak prevents that person from deleting your important apps as well.

If you’re clumsy, AppDelete might be a good tweak to have just so you can prevent yourself from deleting any of your apps by mistake. The tweak is available for free in Cydia’s BigBoss repository and works with all jailbroken iOS 9 devices.