I have a big gripe with the Facebook Messenger app ever since Facebook decided to launch a major UI change without letting me know in the change log first. And now, I’m stuck with an annoyance right smack in the middle of my conversation list when I open the app.

Fortunately, there is a way to hide these annoying ‘Favorites’ and ‘Active Now’ sections, even if temporarily, and we’ll show you how in this tutorial.

An annoyance that seems forced…

Ever since a couple of updates ago, the Facebook Messenger app has been showing sections for your Favorite contacts and those that are Active Now right in the middle of the conversation list. It makes it annoying and more cumbersome to use the Messenger app as a whole, because you have to scroll down to see the rest of your conversation history.

And of course, do you think Facebook mentioned this in one of their change logs? No! Of course not! Facebook loves shoving unwanted updates and features down your throat, and that’s probably precisely the reason they never mention these changes in the change log despite promising to “highlight new features as they become available.”

So, how do you hide those annoying sections? Well, I can tell you it won’t be permanent. It’ll last a few days, maybe up to a week, before you have to do it again, but it certainly is possible to hide them.

1) Launch the Facebook Messenger app on your iPhone, and make sure you’re in the Home tab.

2) Tap and hold on any person’s profile image inside of the section, then release, and you’ll see an Action Menu appear. Tap on the Hide All button. 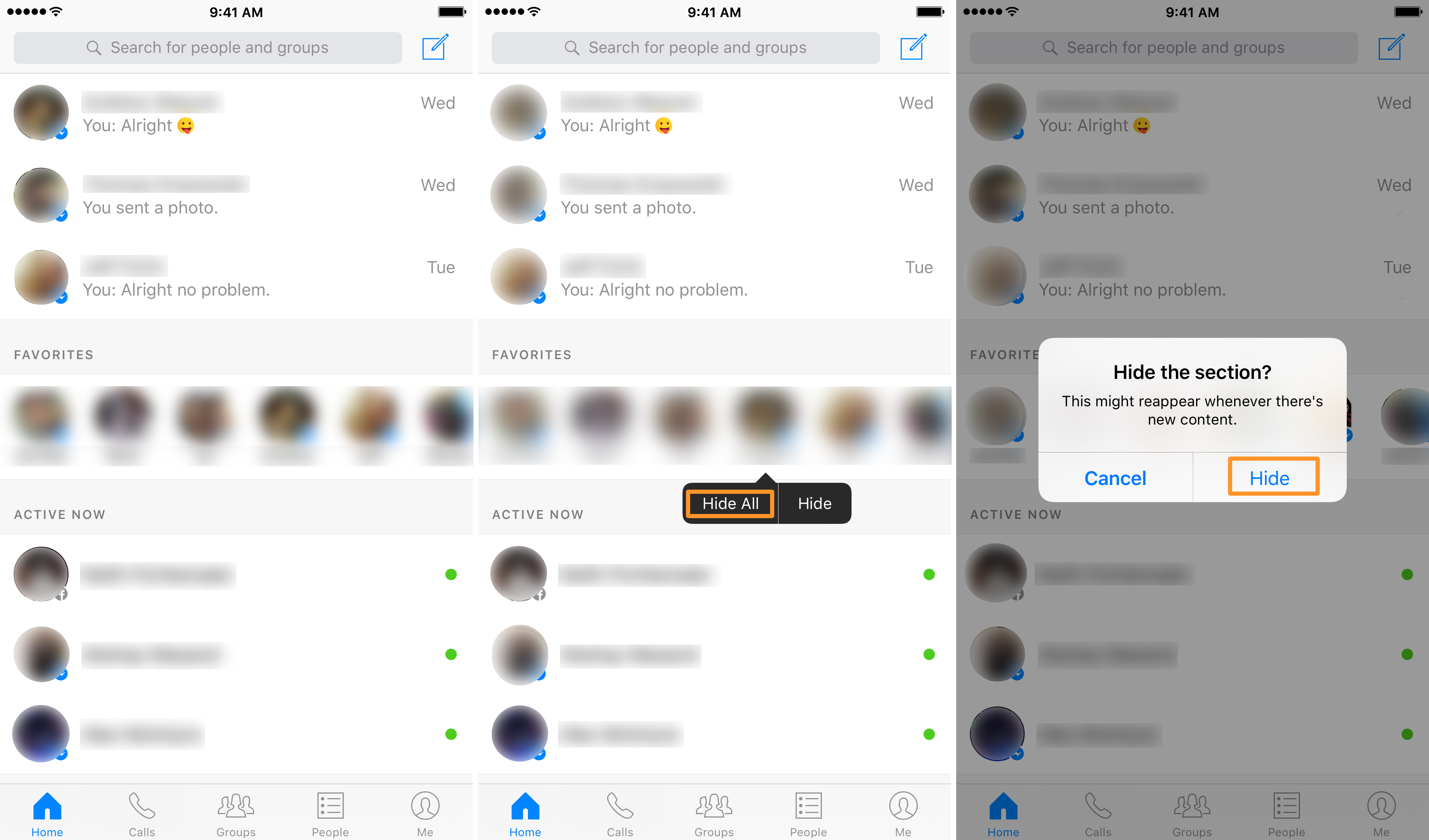 3) In the next pop-up you see, Facebook even warns you that the change will only be temporary, so just tap on the Hide button.

Now the Favorites section will be hidden from the Facebook Messenger app, but it will return in a few days. You might just have to keep going this over and over. I know… it’s stupid.

Hiding the Active Now section is a little different in execution, but still possible. Here are the steps:

1) Launch the Facebook Messenger app on your iOS device and make sure you’re in the Home tab.

2) Swipe to the left on any person in the Active Now section until a gray Hide All button appears. 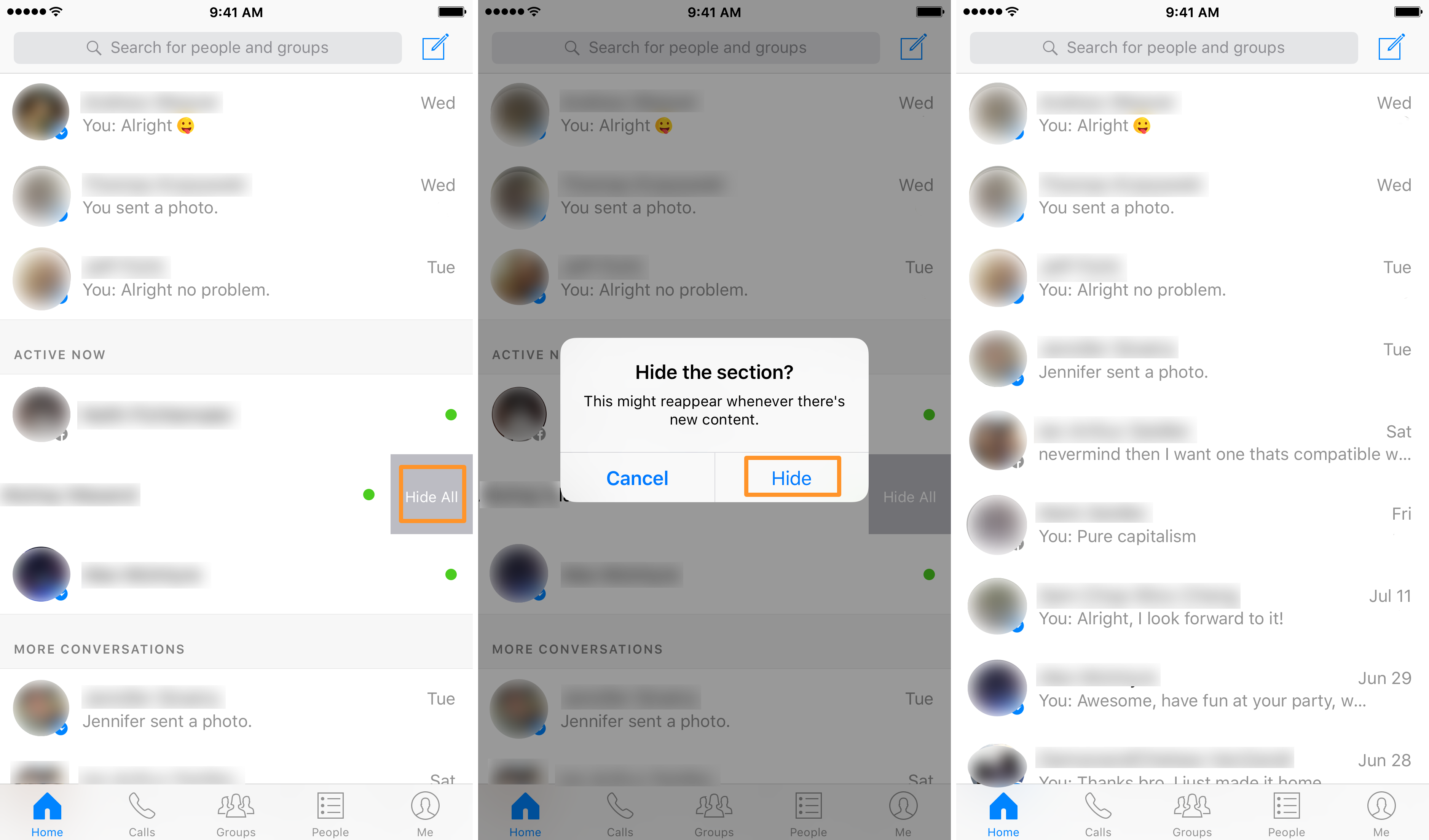 3) Tap on the Hide button that appears in the pop-up prompt that tells you the change will be temporary.

And now you’re good… at least for a few days until it returns. Just like the Favorites section, you can count on having to do this again in the future. Nevertheless, at least you can see your whole conversation list without interruptions now.

I don’t know if it’s just me or what, but I really hate this new feature Facebook implemented in a recent Messenger update, and I wish there was a permanent way to disable these sections from appearing in the Facebook Messenger app.

If you had the same gripe, I hope you found this short guide helpful. Pay no attention to all the blurs I had to make in the screenshots, I just like to respect the privacy of my Facebook friends.

Do you love or hate this feature? Share in the comments!