The App Store is the best way to download and use apps on your iPhone, iPod touch, or iPad, and every so often, you get an update for one of your apps that is supposed to fix problems or add new features.

Of course, what are you supposed to make of app updates that don’t really give you any information about what you’re downloading?

A problem that keeps growing

Let me just be clear from the start that this is somewhat of a rant, and you’re free to agree or disagree with my opinion here, but I have a real beef with something that’s been going on lately in the App Store and as I’ve seen from comments on my Twitter, others seem to agree.

This has been going on for months and I always brushed it off like nothing. On the other hand, it seems as though it’s becoming more and more popular for larger app publishers in the App Store to release weekly or bi-weekly updates where they fail to actually communicate with the user what they’re changing in the app update.

As it becomes more and more of a common practice among larger app publishers, I begin to hate it more and more, because I know less and less about the updates I’m installing. 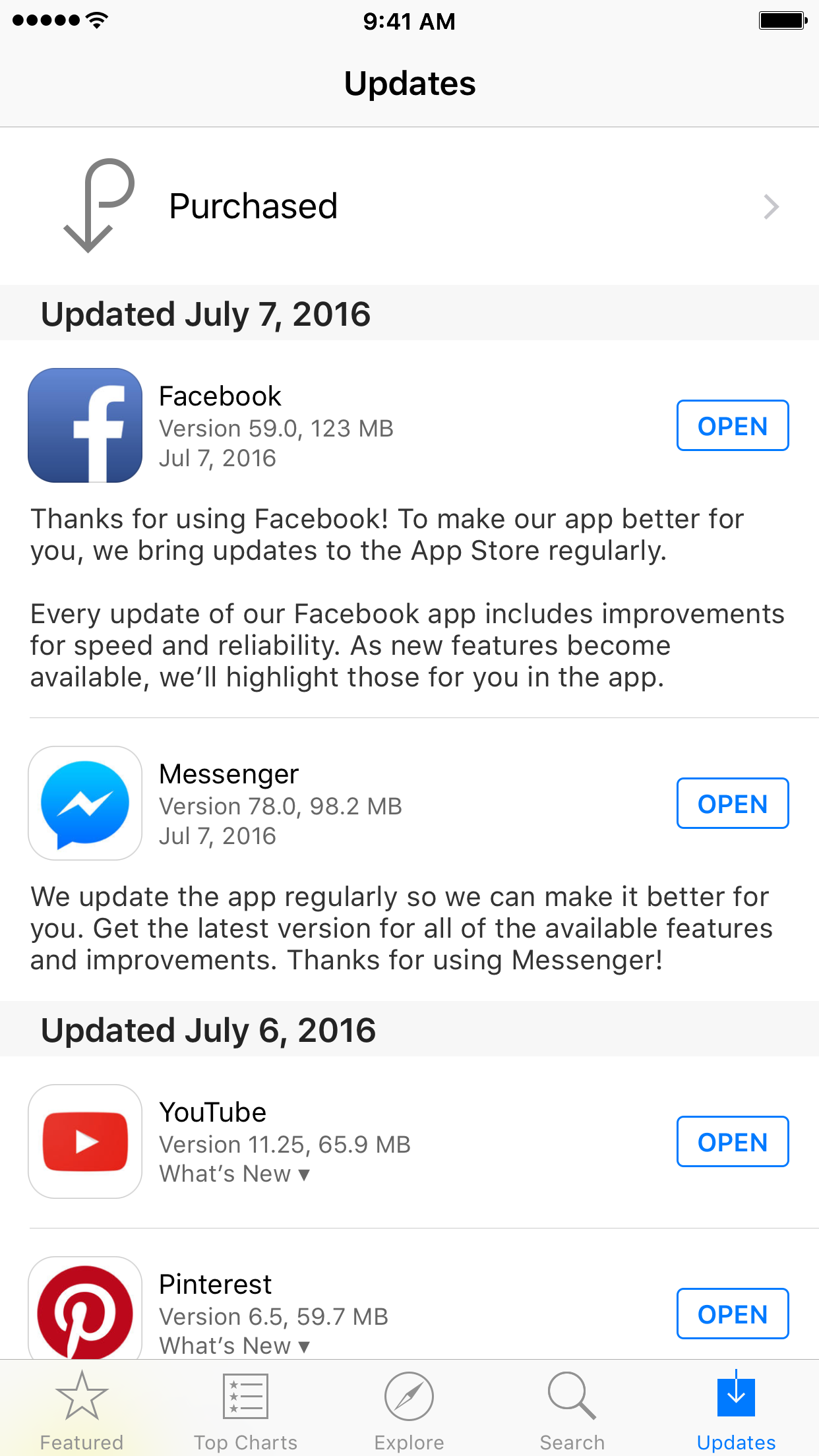 And because this isn’t a post intended to only make Facebook look bad, here are some other examples of other services doing the same thing. 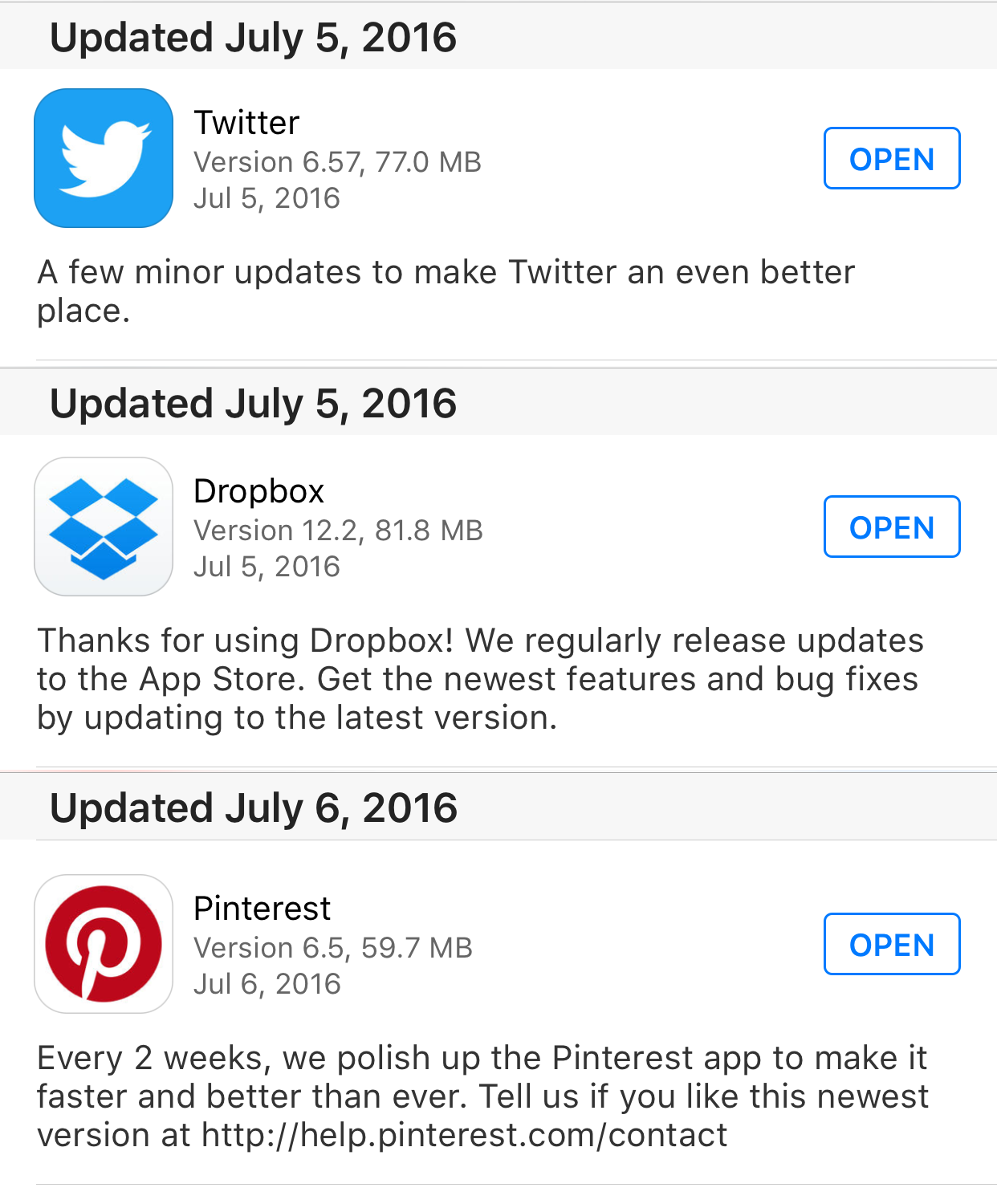 Repeat offenders in this department are Facebook, Twitter, Dropbox, Pinterest, and several others, with the list continuing to grow. Rather than an informative change log that shows a list of changes, you’re left with some tongue in cheek statement about how “they’re listening” and “bringing you the weekly updates you want to make the app better.”

And, just to rub things in a little more, you get that fake smile “thank you” for downloading the update you may or may not want.

After launching the Dropbox app following this update, I immediately saw a redesigned upload button. I mean… would it have been that hard to note in the change log, “hey, we updated our look?” I think not…

Forcing unwanted changes down your throat

Of course… how many times do some of these changes actually do just that? Many times, these updates include app changes that you don’t really want, but the companies push it on you anyways.

One prime example is Facebook Messenger, which I think has been completely ruined in the latest update. In conversation list view, your list of conversations is now interrupted by “favorites,” “active now” and other unwanted content that you don’t’ really want to see, right smack in the middle of your messaging list experience.

Facebook only shows the 3 most recent conversations in the app, and to get to all the other conversations, you now have to scroll all the way to the bottom of the app.

If only Facebook had listed this in a change in the App Store’s Updates tab… I might have actually been able to avoid installing this update and left my app how I liked it.

I’m not only hating on Facebook, because quite frankly I love using it and I use it frequently for my profession, but I really dislike their practices. Facebook isn’t the only company that’s doing this, but they seemed to start the trend.

Now, several other companies have joined the bandwagon. I don’t know what apps to install and what apps not to install, because there aren’t any change logs included in the updates anymore.

I was once told by an app developer that this might happen when an update is so small that it isn’t worth mentioning what’s new, but in many of these cases, I think the changes are actually quite significant, such as the changes in Facebook Messenger. I find it disgusting that you have to visit the company’s blog to find out what’s new because they can’t list what’s new in the change log.

I really appreciate a good change log, and here’s what one should look like. It should inform the user of what’s being fixed, added, or removed, so that they aren’t forced to change an experience to one that they don’t find comfortable: 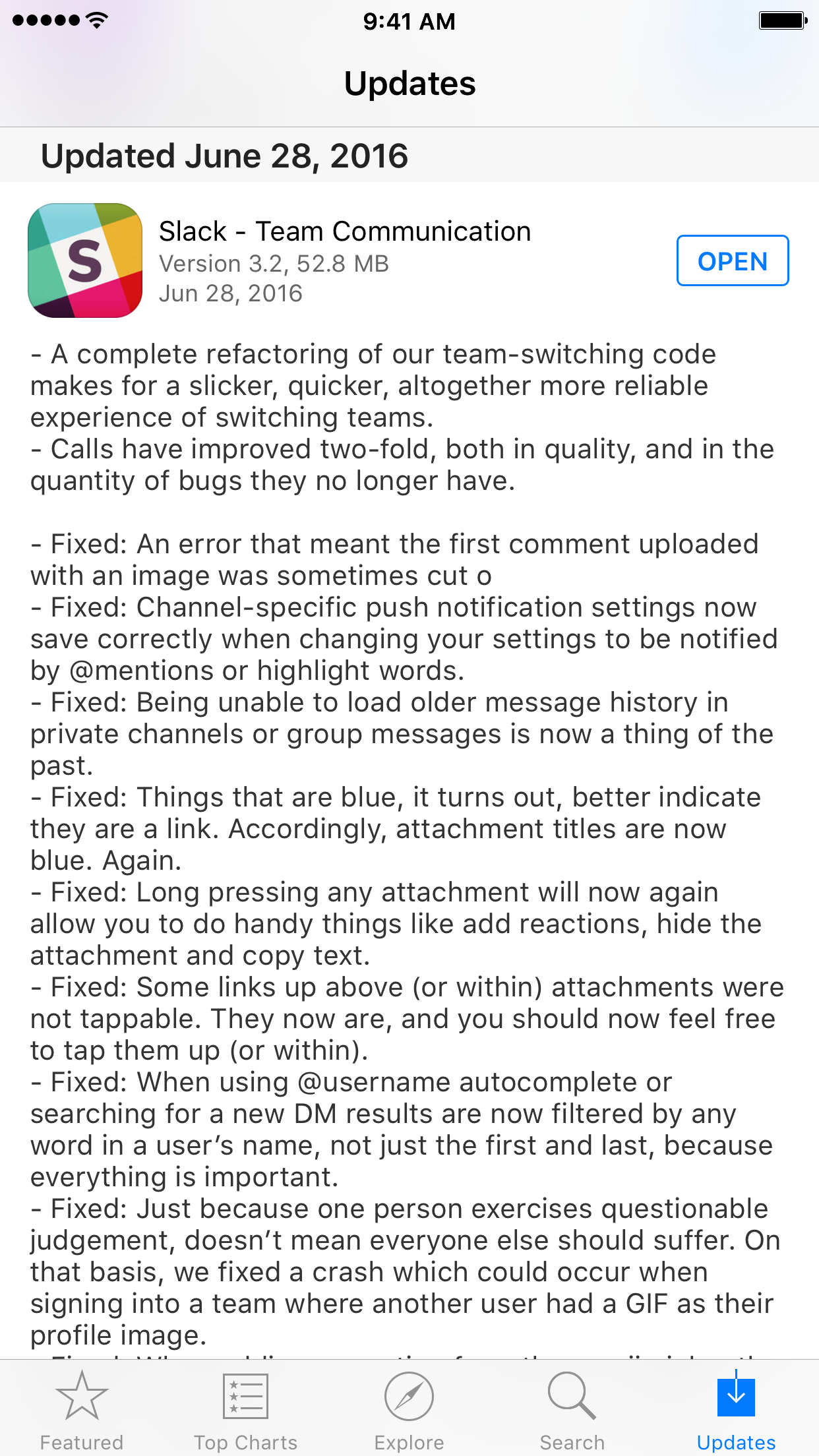 With a change log like this, I can tell if the update is actually going to fix a problem I’m having, or if one of the changes is going to ruin part of the functionality I enjoy using.

Take note of the bulleted (or in this case, dashed) list of changes. Good stuff; why can’t everyone do that?

Slack is really good with their change logs, but a change log like this is also perfectly acceptable. Although it’s not as detailed, it still makes an attempt to communicate what’s new in the update: 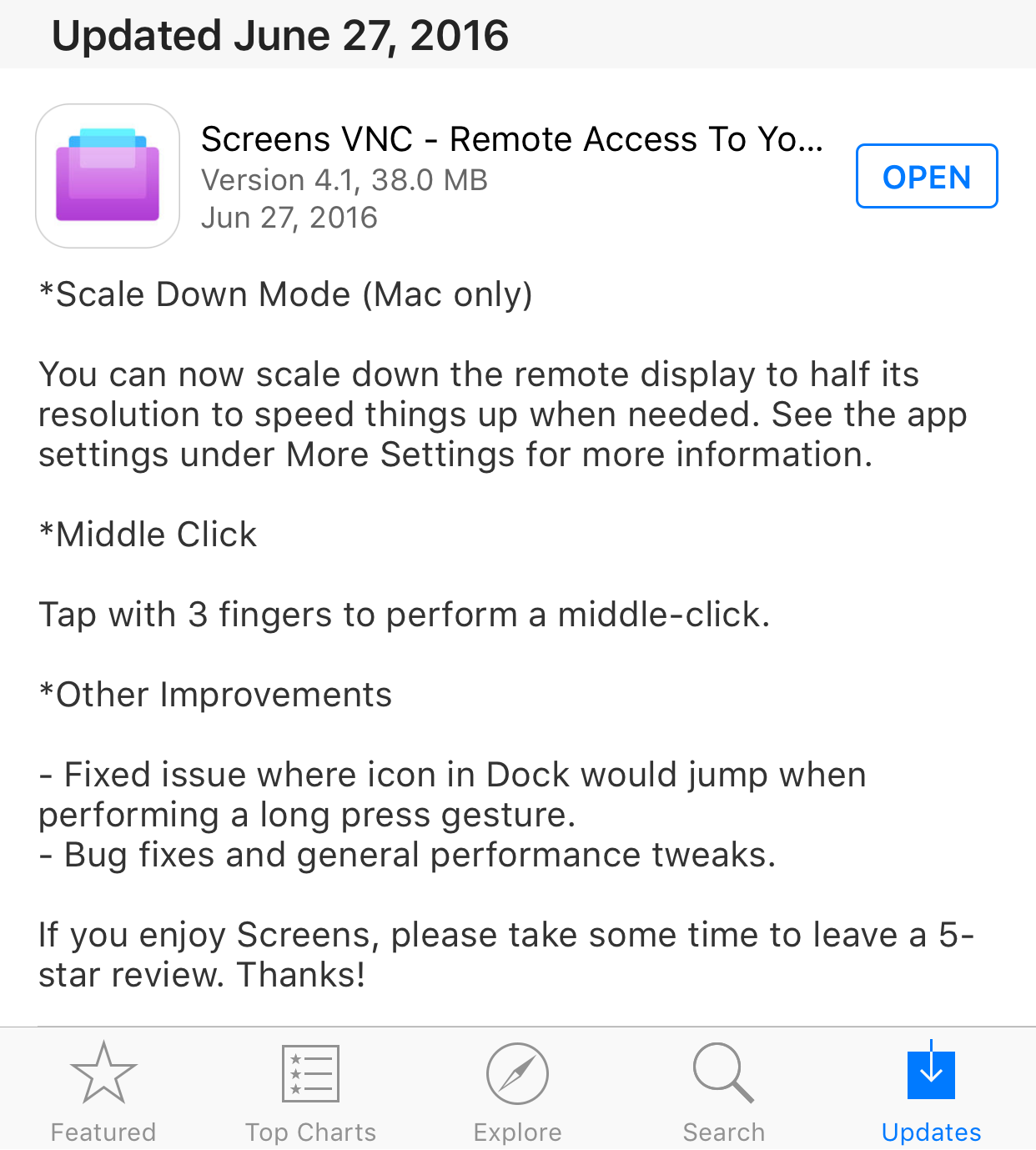 One thing that this definitely goes to show is that individual app developers and smaller development teams care a lot more about their users than larger app publishers do.

A change in focus

I am one to keep things up to date, and more often than not, I’ll update apps whether I really want to or not. But some individuals and organizations actually rely on certain versions of software to go day to day without problems, and sometimes updates introduce instability and problems.

So when companies don’t want to give users the information they need to make an educated choice, it really grinds my gears. In fact, it makes me not want to really install these updates anymore.

I think Apple really needs to do something about the current situation and force app developers to provide some kind of detailed, full-disclosure change log each time an app update is pushed via the App Store.

The only people who suffer from uneducated decisions like these are the users. It allows companies to push unwanted changes and features into the palm of people’s hands and prevent things from working how we want them to.

With a simple App Store policy update, this is something Apple could easily change. What are your thoughts? Should Apple do something about this? Share in the comments!