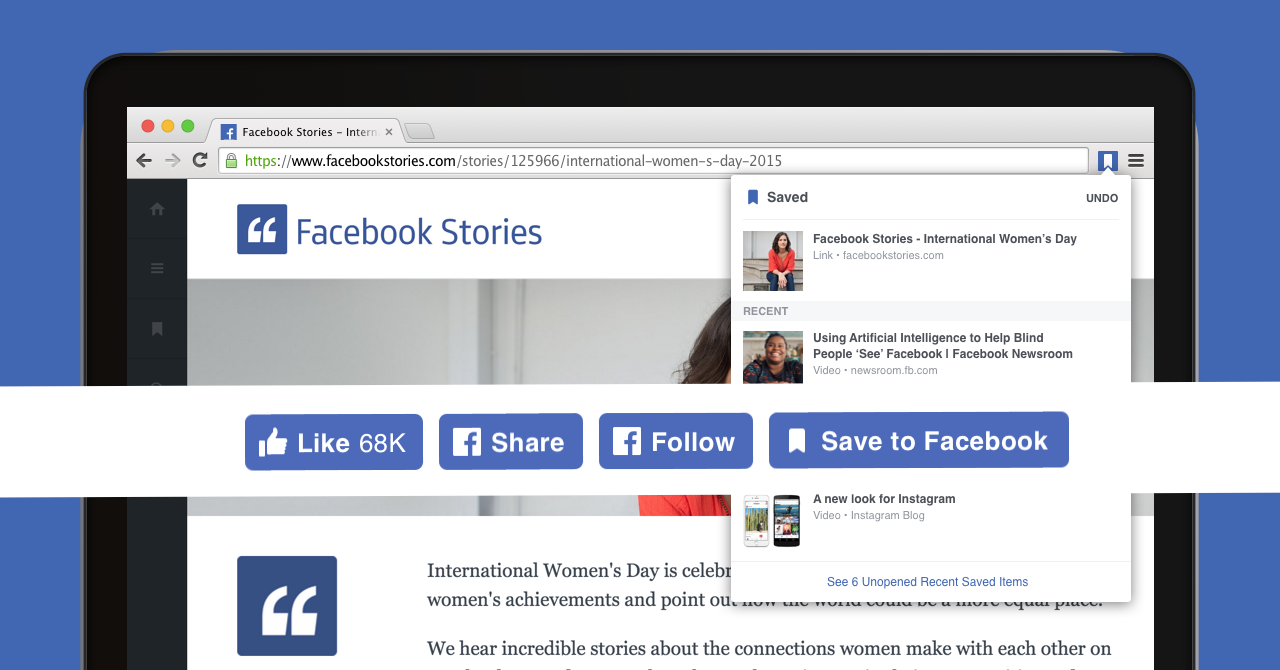 Taking dead aim at Pocket, the new Save to Facebook extension makes it simple for Chrome users to tuck articles away on Facebook to read later on. According to the social networking firm, more than 300 million people use the Save feature every month.

Any web articles saved through the Save to Facebook extension can be revisited at any time through a dedicated Saved tab in the web interface and on the mobile app.

Both new extensions are available at no charge in the Chrome Web Store.

On mobile, the company has changed the appearance of its ubiquitous Like button, which now combines the label, the logo and the button count into a more seamless appearance.

The Like and Share buttons both use the Facebook “f” logo today. Our hypothesis was that more people would understand the thumbs up icon on the Like button, so we conducted qualitative and quantitative tests to measure them side-by-side. The results revealed an increase in engagement, so we are switching the Like button from the Facebook “f” logo to the thumbs up icon.

For those wondering, the Like button is getting over 10 billion views each day across millions of websites, with more than 30 percent of button impressions coming from mobile devices.

Facebook also updated its suite of Social Plugin buttons to make it even easier to share, save and engage with content on the service. The refreshed buttons are now mobile-friendly and have a cleaner appearance.

Developers can now choose between the new button sizes, each provided in both desktop and mobile flavors. Facebook’s new design language has been applied across all its buttons so these Social Plugin buttons now have a flat design with color consistency.

“If you have the Comments Plugin installed on your site, comments on a web article will sync the conversation with its Instant Article equivalent,” said the firm.

Publishers who have Comment Mirroring turned on for the Comments Plugin will see comments from the article’s post in News Feed synced with the web article and the Instant Article, creating a unified thread across all three surfaces.