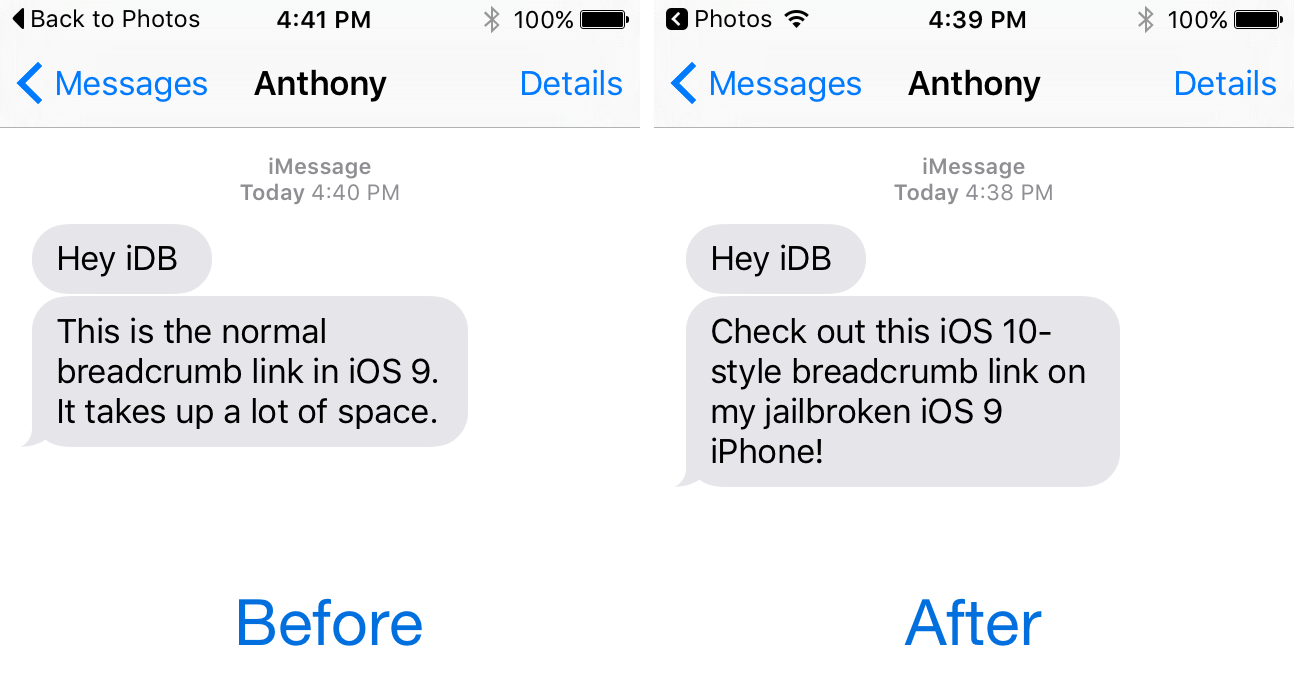 There is a truckload of new features in iOS 10, but some of the features it has to offer have existed for a long time already and have just received a facelift.

One of the features that has existed since the launch of iOS 9 is the Breadcrumb links that appear in the Status Bar when you switch between apps, and iOS 10 changes the look of these a little bit.

If you’re a fan of the new design, you’ll be happy to hear Breadcrumb10 is a new jailbreak tweak that lets you port the iOS 10 Breadcrumb changes to your jailbroken iOS 9 iPhone, iPod touch, or iPad.

One of the major new features of iOS 9 was the ability to quickly get back to the app you were just in prior to jumping from that app to another via banner notification. A link would appear in the Status Bar that says “Back to [App Name]”, and a small black arrow appeared to the left of the text.

On the other hand, it takes up a lot of space, and one of the major complaints is that Breadcrumb links stay in the Status Bar until they are used or you close the app, which means you can’t see your signal strength for data or Wi-Fi as long as it’s there.

iOS 10 tries to fix this problem slightly by reducing the amount of space the Breadcrumb links take up.

Rather than saying “Back to Photos” like you see in the screenshot examples above, iOS 10 is going to simplify things by showing only the name of the app “Photos” with an arrow to the left of it, as you see above. Of course, if you’re in an app besides Photos, it’ll show that app’s name instead.

A better look and feel

Overall, Breadcrumb links always felt like a beta in progress with iOS 9. iOS 10 makes things a little better by continuing to allow me to see at least my Wi-Fi signal strength, which is an important indicator that lets me know if I’m connected to the internet or not, or if my signal strength is strong enough or not.

With a smaller footprint in iOS 10, I think Apple has come up with a better solution to Breadcrumb links, but I still think there may be more room for improvement.

Then again, I’m no design expert.

If you want to enable iOS 10-style Breadcrumb links on your jailbroken iPhone, iPod touch, or iPad, then trying a new free jailbreak tweak called Breadcrumb10 is going to be worth your time. It’s available in Cydia’s BigBoss repository and works on all versions of iOS 9 only.

There are no options to configure either; after you install the tweak, it’ll take effect at changing your Breadcrumb link appearance immediately.

Do you prefer the iOS 10 Breadcrumb links over those in iOS 9? Share in the comments below!