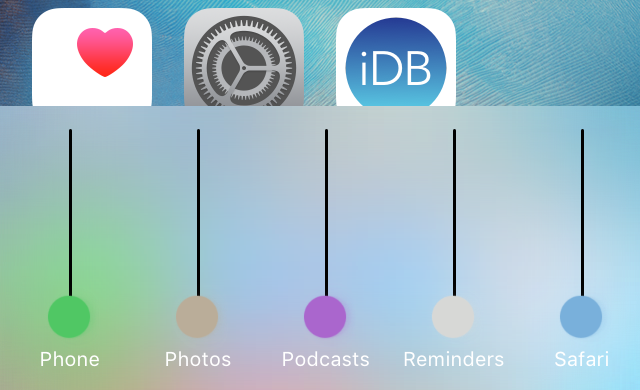 If you’ve ever wanted to have more fine-grained control over the volume level across your iOS experience, and you’re jailbroken, then you should really check out a new jailbreak tweak called VolumePanel.

With this tweak, you’ll be able to set a custom volume level for each and every app installed on your device. In this review, we’ll show you what makes the tweak tick and talk about how it can be useful. 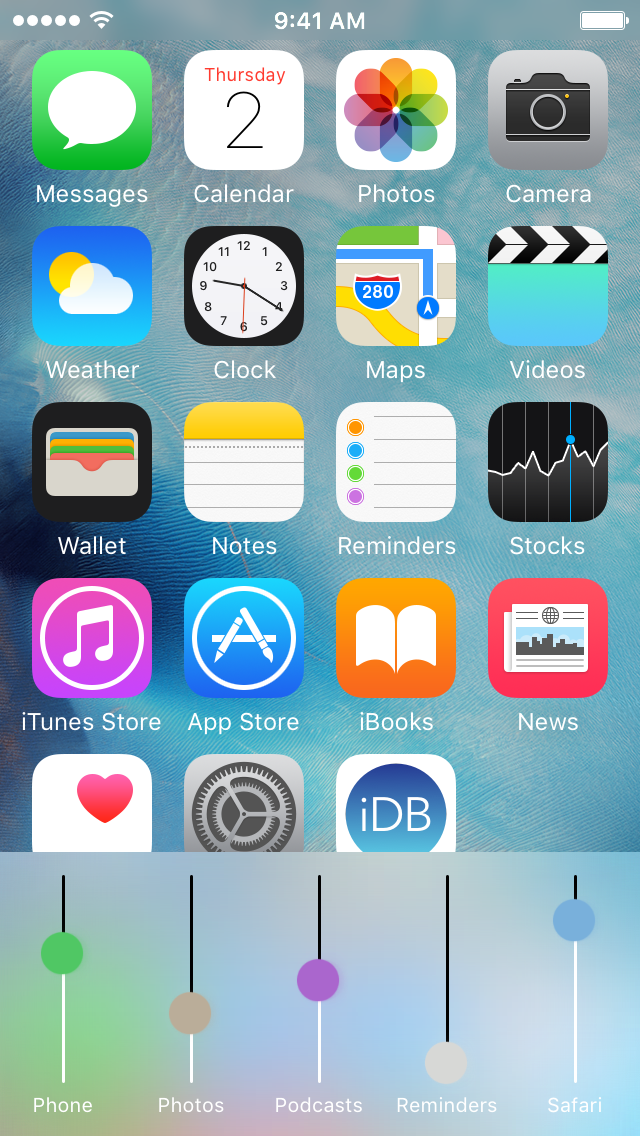 Being able to adjust the volume level on a per-app basis could be useful under a number of very specific circumstances.

One that I can think of right off the bat is where you use certain apps with headphones quite often, or you use other apps to share content with people right beside you quite often. In this circumstance, you may want to pre-configure the apps you listen to with headphones to a lower volume level than the ones you have others around you listening to with you.

For example, I use the Music app to listen to Music with my headphones or speaker, and I’d rather not blow my eardrums out, but when I use YouTube to show my friends a funny video, I’m usually using the stock iPhone speaker and it needs to be at a much higher volume level for everyone to hear it properly.

And yes, in case you were wondering, the tweak lets you configure the volume levels of all kinds of apps on your device, whether they were there out of the box, installed from the App Store, or even if they were installed from Cydia.

VolumePanel is used one of two ways: the first is that you can set up an Activator action that lets you invoke the interface at any time, and that’s the interface you see above; the second is via the button that is added to the top left of the media controls in iOS’ Control Center. 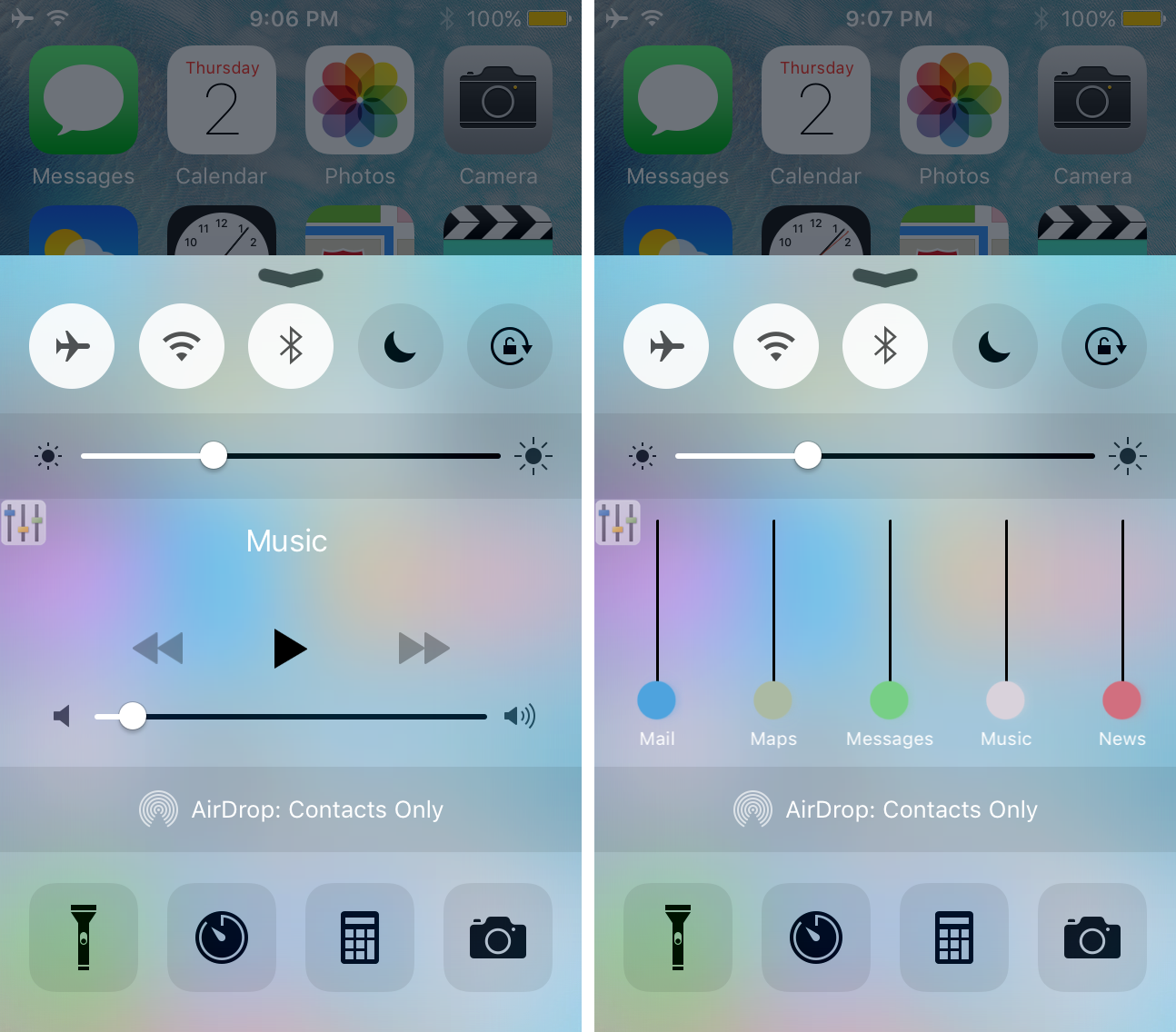 You can tap on the VolumePanel button to hide and show the volume controls for each app on your device. You can easily change the volume levels of individual apps by tapping and dragging on the knobs. You can even scroll left and right between the knobs to move through all of the individual apps the tweak recognizes on your device and set independent volume levels for them.

VolumePanel is going to add a preferences pane to the Settings app that lets you configure the tweak to your liking. 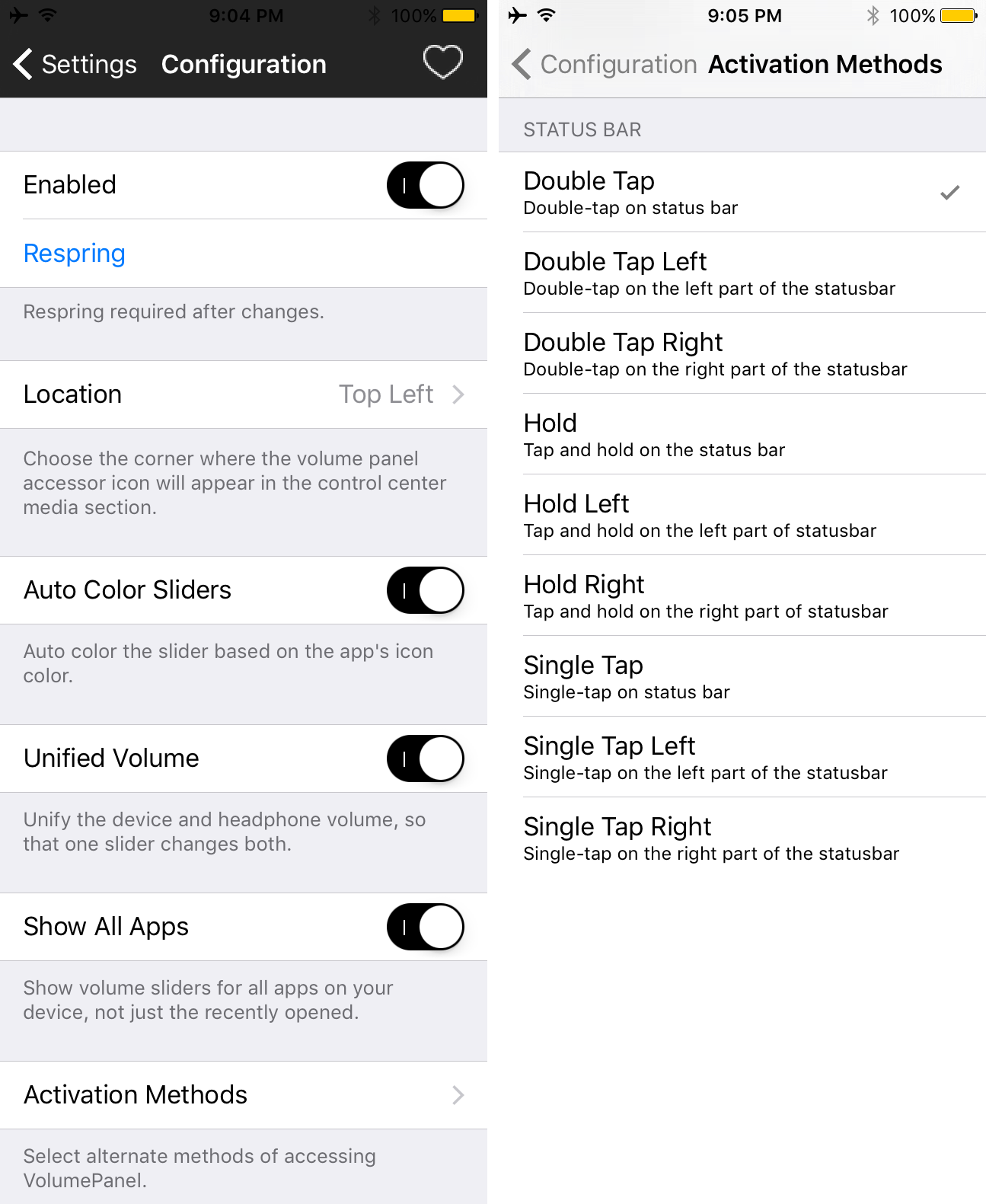 The options you get here include:

You can also respring your device from here to save the changes you make to the Settings.

As I discussed earlier, I can think of a situation or two where this tweak will come in handy. To me, fine-grained control over anything, especially volume, can be very useful.

I find that the ability to unify the speaker and headphones volume levels works wonders for keeping volume levels inline when I frequently switch between the two, as it keeps me from being surprised by an unwanted volume level when I go to use an app with either speakers or headphones.

I should also note that the auto-colored slider knobs are a nice cosmetic touch. It’s nice to see both Activator and Control Center support because for those who have Control Center disabled for any reason, you can use Activator as an alternative to get to the interface and continue using it. Another thing I like is that it supports all apps on the device, and not just stock ones or third-party ones.

How it differs from other tweaks

I recently reviewed a tweak called VolumeMixer 2, and this tweak may seem as though it has a similar function. The main difference is that VolumeMixer 2 lets you change the volume levels of individual volume modes throughout iOS, such as Bluetooth headsets, headphones, ringer volume, media volume, and more, while this tweak lets you change the individual volume levels of your apps.

Depending on your uses, you may pick VolumeMixer 2 over VolumePanel. If you use various types of volume constantly on your iOS device, then VolumeMixer 2 may be a better solution, as it gives you control over individual volume levels based on how you use your device.

If you only primarily use the ringer volume and media volume, but want to control the individual volume levels of your apps more-so, then you would probably prefer VolumePanel over VolumeMixer 2. You may also like the SwitchHUD tweak, along with VolumePanel, because it makes it easier to switch between just the two volume modes (ringer and media) on the fly.

These are, of course, functionality types that VolumeMixer 2 doesn’t have. Our full reviews, which are linked at the bottom of this piece, have more information on the other tweak alternatives.

VolumePanel looks to be a solid tweak that can be useful in an array of situations, and if you’re interested in having it to gain more control over how your device’s volume works, you can snag it from Cydia’s BigBoss repository right now for just $1.49.

Keep in mind that the tweak has been made to work with iPhone and iPod touch only, and it won’t work on iPad. On the other hand, it will work with both iOS 8 and iOS 9, so it at least redeems itself in that department by being compatible with two versions of iOS that can be jailbroken.

What are your thoughts on being able to control the volume level independently for each app on your device? Share in the comments below!