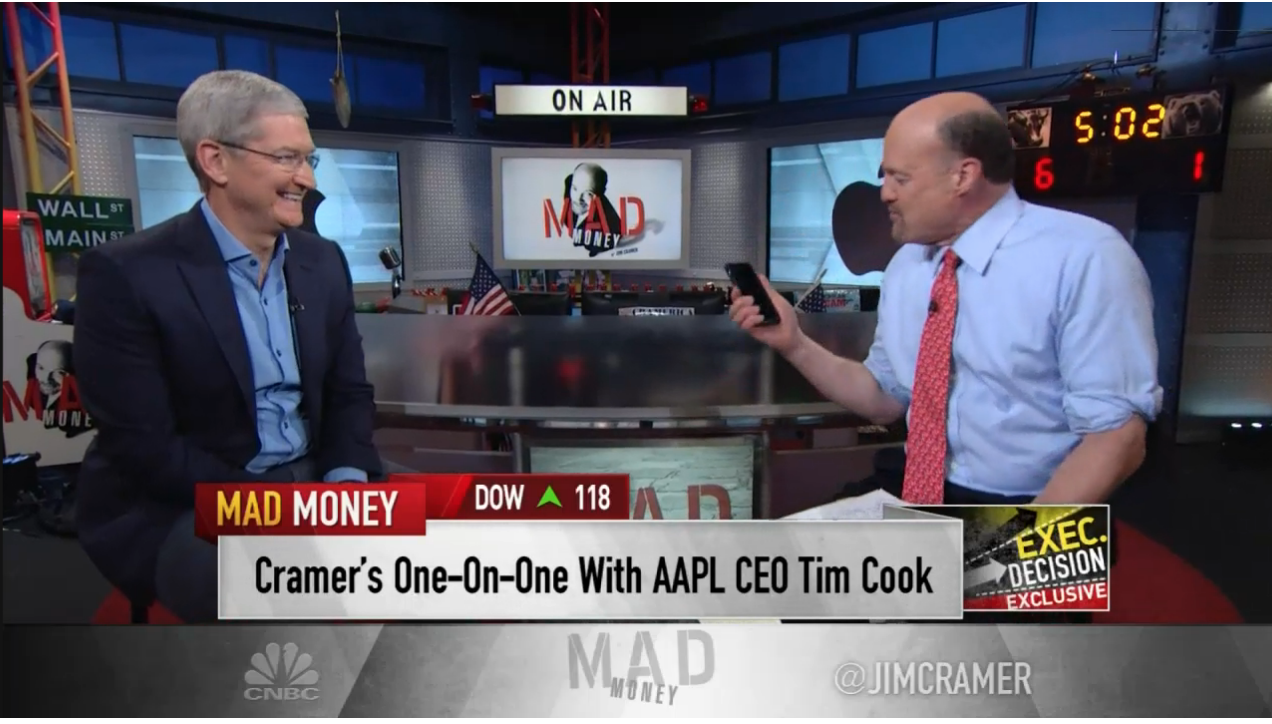 While the interview is transparently a PR move to let Wall Street know that Apple is still on the right path, Cook did offer up some interesting comments about the future of his company. Naturally, we’ve highlighted some of our favorites for you below.

Jim Cramer: Let’s talk about shorter term that has captivated the narrative. Tony Sanguinetti good analyst on your call all the time tells the New York Times there’s no question that Apple’s best days are behind it the company grew at astronomical rates and it is now so big that its ability to grow at these rates doesn’t exist anymore. There’s an obituary.

Tim Cook: Yeah, I couldn’t disagree more. Here’s what I see. We are in some incredible markets the smartphone market eventually everyone in the world will have a smartphone. Penetration today is in the 40s a long way to go. Emerging markets like India LTE penetration is zero we’ve got great innovation in the pipeline new iPhones that will incent you and other people that have iPhones today to upgrade to new iPhones.

Tim Cook: India will be the most populous country in the world in 2022. India today has about 50% of their population at 25 years of age or younger. It’s a very young country. People really want smartphones there, really want smartphones. And this year, the first year, LTE begins to roll out. And so many of your viewers here in the United States, they’re used to using LTE and streaming video. And hopefully they’re getting a good experience there. In India you can’t do that long – there is no LTE. And so that’s changing. Huge market potential.

Tim Cook: Yeah. We don’t talk about futures as a company. As you say we’re fairly secretive. We don’t talk about products that are in the roadmap. But I would tell you that we’re incredibly excited about things we’re working on. Incredibly excited. And so I don’t want to be more specific than that. But I think that the other thing maybe that’s worth pointing out is, if you kind of look at all the things Apple has done over time, at the time they were done they were rarely ever seen like they were in retrospect.

Tim Cook: The way that we look at the watch, though, we were – our first goal is to establish a new category. Smartwatch category wasn’t really established, so we needed to establish the category. And we wanted to roll out slowly. Well, today, to put it in perspective, you can buy Apple Watch in 14,000 locations. You can buy the iPhone at over 200,000. And so we’re still in learning mode. We’re learning fairly quickly, though. We know a lot more than we did a year ago. And you’ll see the Apple Watch getting better and better.

If you want to watch the interview, you can find it on CNBC’s website (be aware, it’s in Flash). If you’d rather just read the full transcript, The Loop has it word for word.