Folders are a great way to conserve space on your iPhone’s Home screen, but the animation for opening folders and the folder interface itself are so boring; c’mon Apple, you can do better than that!

Fortunately, a new jailbreak tweak called Exsto is now available in Cydia for just $0.99 and it transforms your folder experience in iOS. In this review, we’ll be talking all about Exsto and showing you how it works.

Exsto is a breath of fresh air that you’ll get to inhale every time you go to use one of your iOS folders. Rather than that bland, blocky grid of apps you’d normally see, Exsto gives you a dynamic radial-styled app launcher, as shown above.

Now, let me make one thing clear: this tweak doesn’t replace the folder interface, it compliments it. If you tap on a folder, you’ll still get Apple’s boring folder interface as usual. Exsto is used by tapping and holding on a folder icon from your Home screen for just a moment. Then, you can drag your finger to any app in the radial interface and release your finger to launch that app.

With some practice, you’ll find that Exsto can be a lot faster for accessing your apps from your folders than launching the folder interface and paging between folder pages.

What’s nice about Exsto is that it’s very dynamic; it adjusts automatically to the number of apps you have in a folder. The tweak automatically spaces the app icons out so that the radial design is as symmetrical as possible.

When you have a notification, like our Messages app does in the screenshot below, the app will glow red so you know what app the notification badge is coming from: 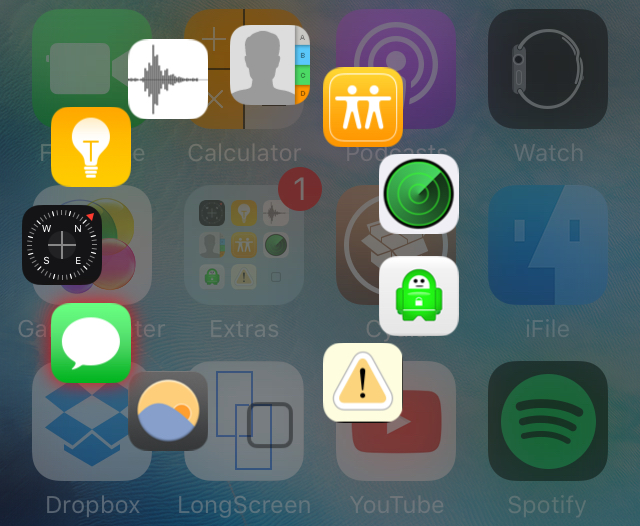 What’s more is if you have a folder against a wall, such as the edge of your screen, or in your Dock, Exsto adjusts its shape to a half or quarter circle instead of a full one, which is kind of cool.

Exsto also lets you configure a few options to get it functioning comfortably on your device based on your own preferences. The tweak will add a preferences pane to the Settings app after installation:

Some of the things you can configure here include:

I think Exsto is a very interesting new take on Home screen folders. The new gesture can be far more effective for getting to apps in your folders faster, and rather than wasting time swiping through pages in your folders, this tweak keeps all your apps in an easy-to-access radius with a comfortable gesture.

Exsto goes a step further by being made compatible with not only iOS 9, but also iOS 8 devices. This means the tweak has the potential to reach a number of jailbreakers.

I personally like the tweak, and it’s something I would probably use on my daily driver just because it’s a little more exciting to use. I think the $0.99 price tag is a fair bargain for this functionality and configuration options, but if you like the stock iOS folder interface better, then you might want to pass.

Exsto, which is a tweak jailbreakers can download from Cydia’s BigBoss repository for $0.99 to change their folder interface, is a great new take on the way we interact with Home screen folders. If you’ve got a buck laying around, give this tweak a try!

What are your thoughts on Exsto? Share in the comments!