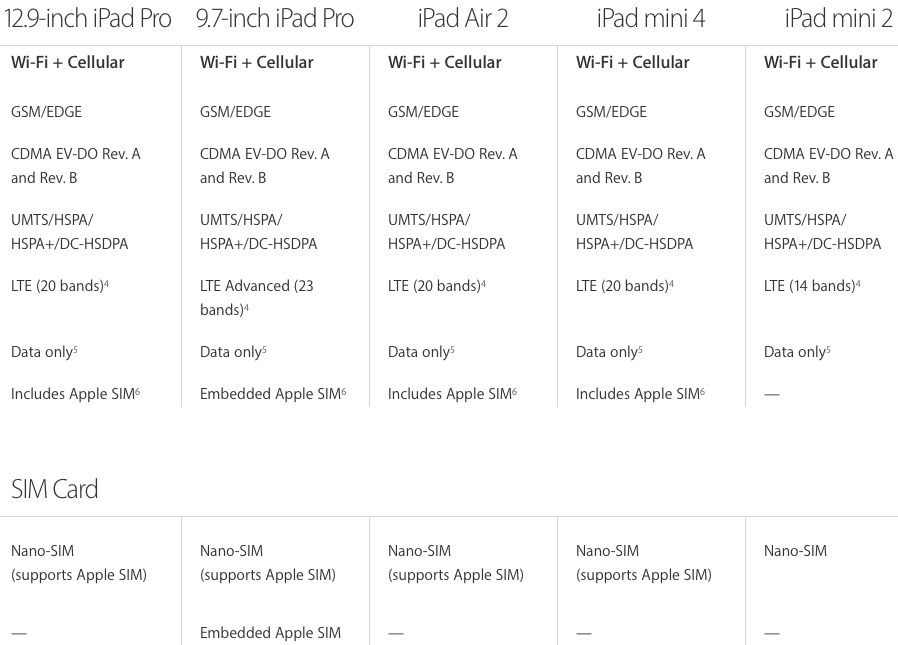 Tucked away on the iPad Pro Tech Specs webpage is an interesting tidbit about Apple’s new 12.9-inch iPad Pro model. If you’re in the market for that device and are contemplating buying a Wi-Fi + Cellular edition (Model A1674), know that the 9.7-inch iPad Pro ships with an integrated, non-removable Apple SIM.

This is the first time an Apple device has embedded the Apple SIM since its debut. The Apple SIM started shipping in October 2014 with the iPad Air 2 and iPad mini 4 and was added last fall to the 12.9-inch iPad Pro.

That’s not saying that the cellular edition of the new 9.7-inch iPad Pro won’t accept SIM cards. The device still has a SIM tray on its side like its bigger brother that accepts any standard nano-SIM card, in addition to an integrated, non-removable Apple SIM.

We’ll have to wait for iFixit’s ritual teardown analysis to see how exactly Apple’s SIM solution is embedded inside the device, and if it can be easily replaced by the user.

The Apple SIM is currently supported by a handful of wireless carriers in the United States, the United Kingdom, Germany and elsewhere. It was conceived to make it easy for customers to sign up for a compatible wireless service right on their device, in Settings, without having to go directly through a carrier.

As such, the Apple SIM is primarily meant to be used by frequent travelers who prefer to change their wireless service on a whim, bypassing long-term contracts and paperwork.

On the downside, some carriers lock the Apple SIM to their network after a user signs up for their service. Apple acknowledges as much, writing on its website that the embedded Apple SIM in the 9.7-inch iPad Pro “may be disabled when purchased from some carriers” so you will have to double-check with your local carrier.

Neither the Apple SIM nor the embedded Apple SIM are available in China.

More about this technology is available at the Apple SIM webpage, or see this webpage to check if your device is compatible with the Apple SIM.

To learn more about other differences between the new 9.7-inch iPad Pro and the 12.9-inch iPad Pro, check out Cody’s article.