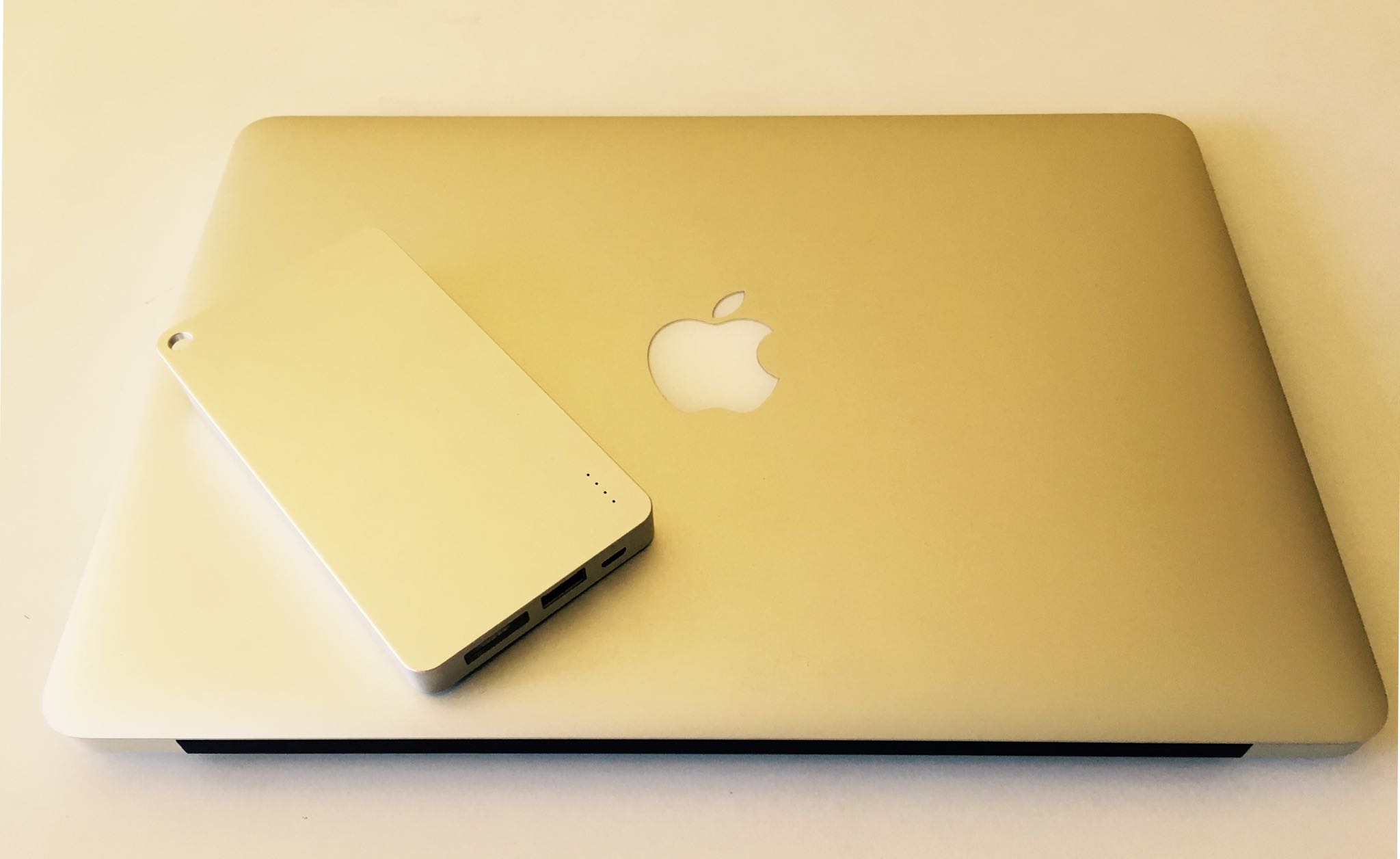 Surprisingly, through its built-in MagSafe 2 port the Quarter charging its 5,000mAh internal battery via the MacBook’s MagSafe wall charger takes under an hour. The company kindly provided me a review unit that I tested out over the past week, here’re my impressions.

Despite the fact that the Quarter is a crowdfunded project, it’s now well past its funding goal and ready for sale. So no, the Quarter isn’t a prototype as the first 1,000 units are being manufactured for international customers as we speak.

And if I may point out, it certainly feels and works a lot better than your typical crowdfunded gizmo that never leaves the prototyping stage or sees the light of day.

Unlike many external battery packs that come in plastic enclosures, the Quarter is made from brushed aluminum to nicely match the overall silver aluminum aesthetic of Apple products. It uses the same material as Apple’s Mac notebooks. 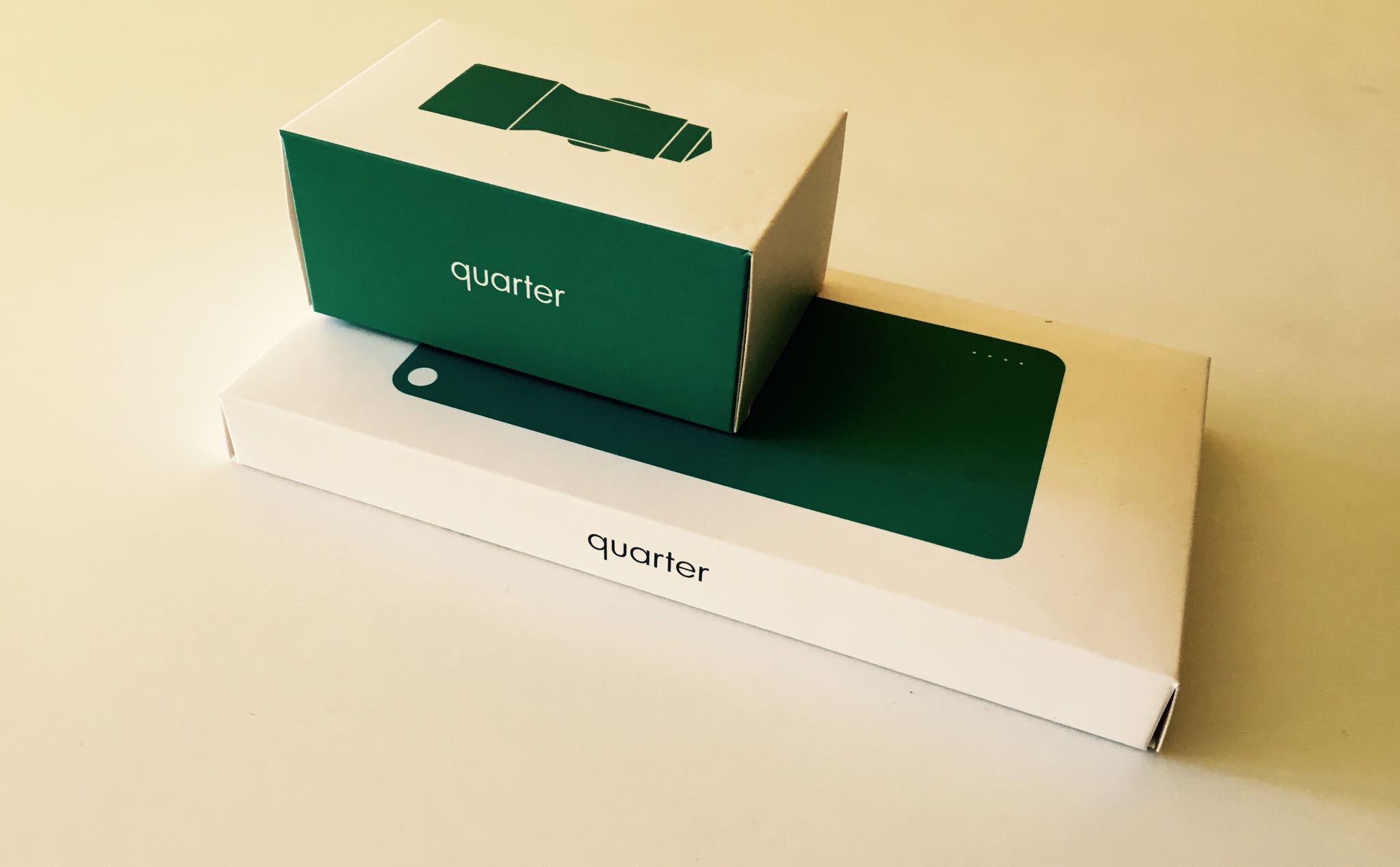 At the top, you’ll find a handy ledge and hole for clipping the Quarter to your backpack, key holder inside your messenger back and what not. On the back, there’s a built-in 3-Amp MagSafe port for fast-charging the power bank via Apple’s 45/60/85W MacBook wall chargers. A 1-Amp micro-USB port on the back lets you fill up the Quarter through any standard charger.

Of course, you’ll also find your full-sized USB port for charging an iPhone, iPod touch or iPad, as well as other USB-based smartphones, tablets and other devices.

I especially like the Quarter’s buttonless design. Its four subtle indicator lights on the enclosure light up via a built-in LED when you shake or tap the device gently to give you a sense of how much power you have left. 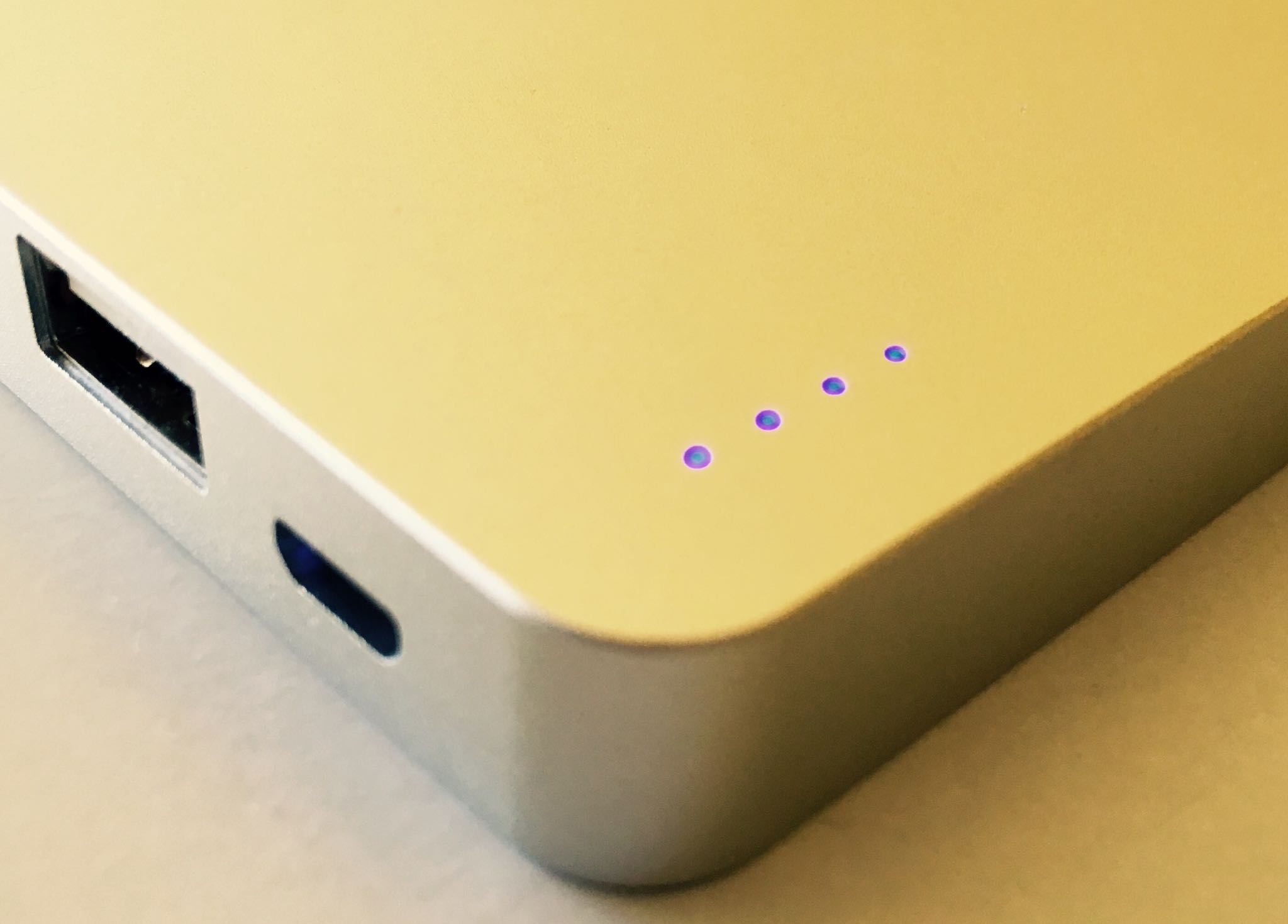 It’s very cool design with an Apple-like touch that makes the Quarter all the more stylish and fun to use, in my personal opinion. On the inside, there are two lithium-ion polymer battery cores, each rated at 3.7V/2,500mAh.

Beaver says the Quarter’s 3-Amp fast-recharging via a MagSafe wall charger (or an optional MagSafe car adapter) goes from zero to 100 percent capacity in 45 minutes.

That’s not a bogus claim: after depleting the Quarter completely, I charged it to full capacity in about 40 minutes using my MacBook Air’s 45-watt MagSafe wall adapter. 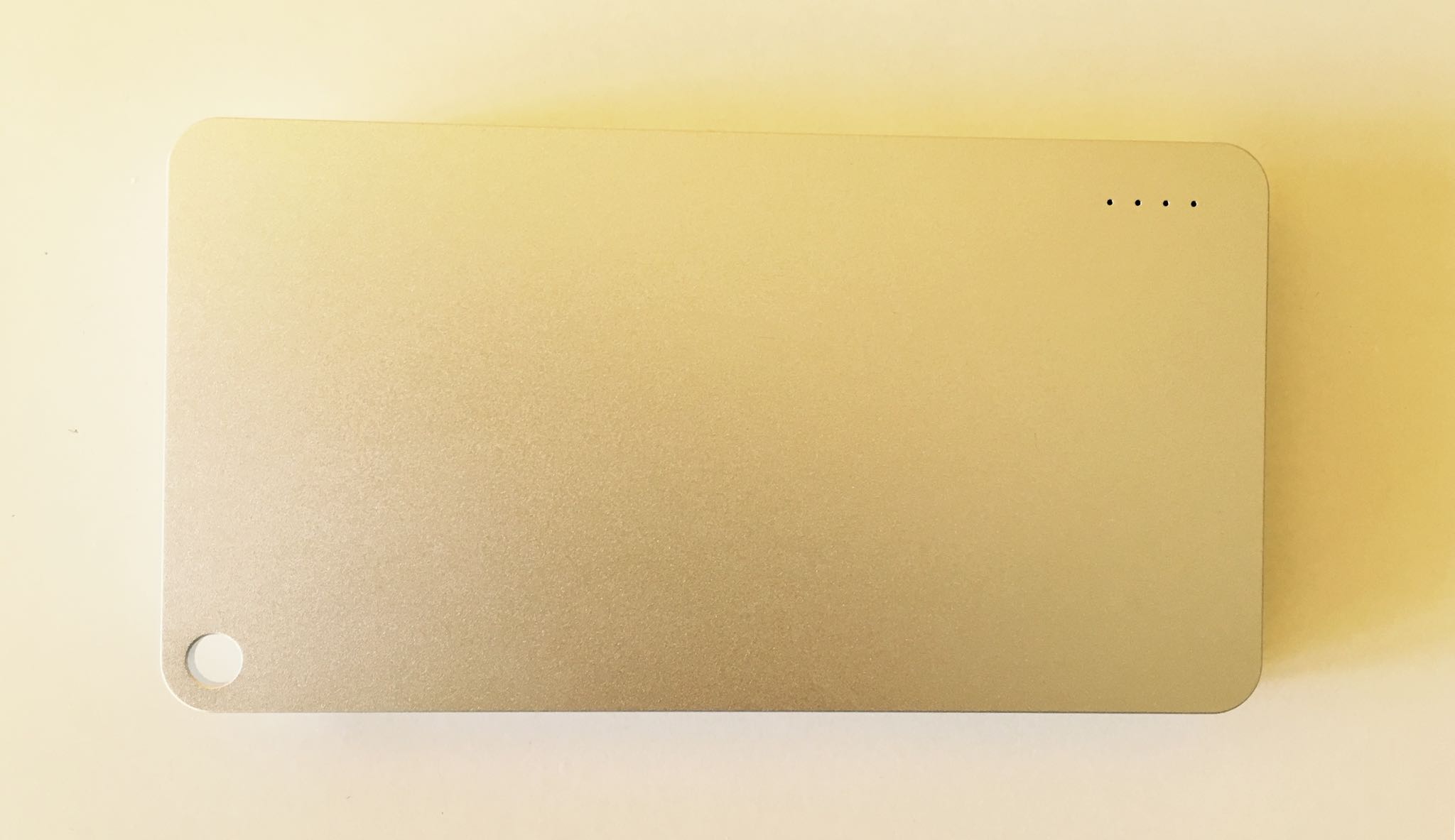 Compared with typical micro-USB-powered batteries, the Quarter has ten times faster charging. The device can get pretty hot during recharging because it uses eight times the power of ordinary juice packs.

Beaver assures me this is normal as they use synthetic graphite, a material with high heat conductivity, to keep its temperature below 104 degrees (40℃) while charging in a 77-degree Fahrenheit (25℃) room. 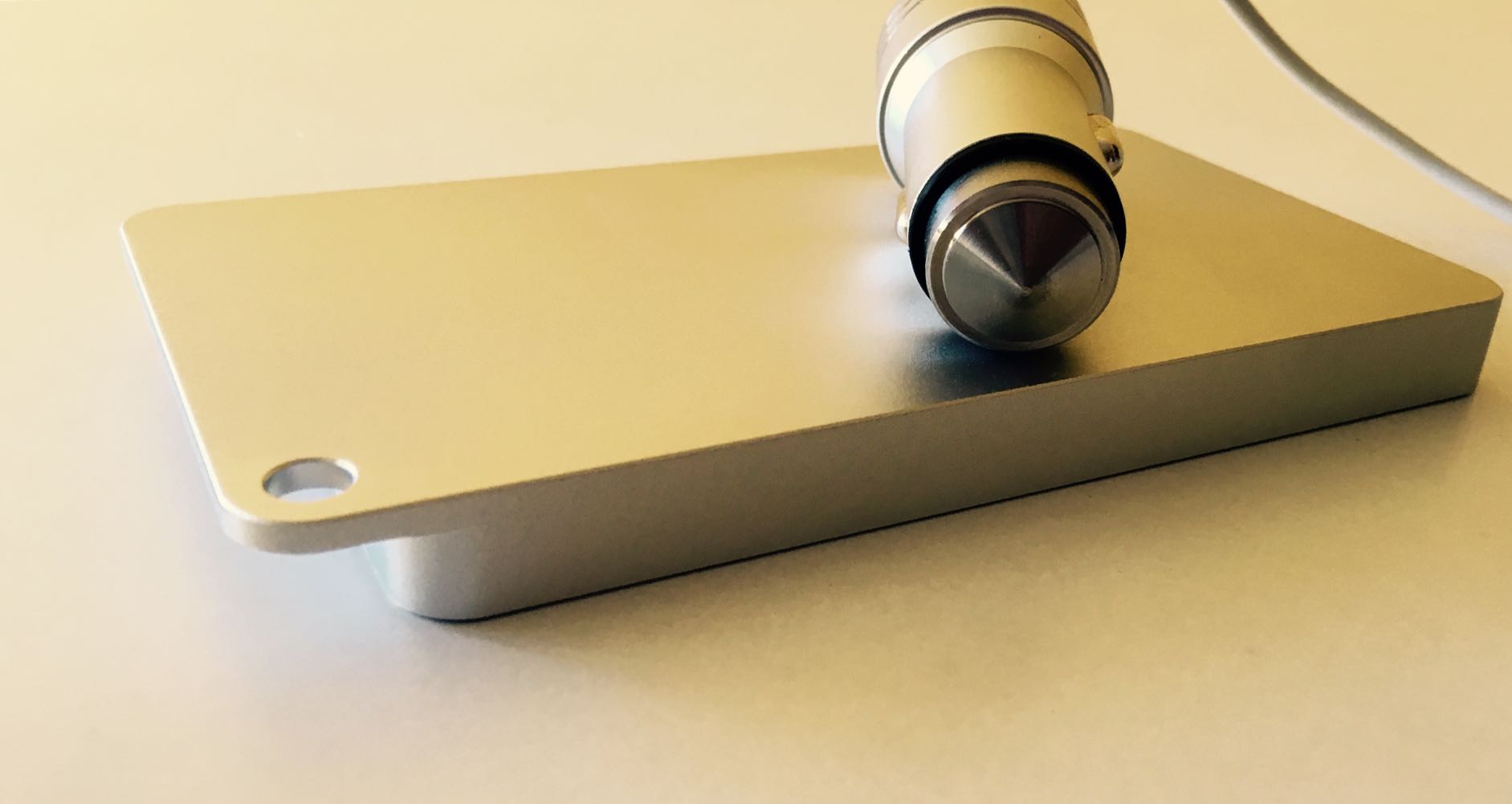 Actually, the Quarter should retain more than 70 percent of its nominal capacity even after 500 charging cycles, according to Beaver. Folks who don’t own a MacBook and are reluctant to purchase Apple’s pricey $79 MagSafe adapter can instead recharge their Quarter via a built-in micro-USB port.

Recharging via micro-USB occurs at normal speeds: it takes about 7 hours to fully charge it via a 5V/1A charger, like the 5-watt charger that came with your iPhone.

After charging it via MagSafe for just fifteen minutes, the Quarter has enough juice to fully recharge a completely dead iPhone 5s, which is extremely impressive. Just plug in your iOS device via a Lightning-to-USB cable (or connect a non-Apple device via micro-USB) and shake (or tap) the Quarter to begin charging.

My iPhone 6s charged from zero juice to full capacity and there was still charge left in the Quarter. And I recharged my rusty old iPhone 6 Plus from dead to full in a little more than two hours. All things considered, the Quarter has enough capacity to provide a full charge for your iPhone 6s Plus. After that, you’ll still have approximately one out of four LED bars left, which works out to about 25 percent capacity.

The Quarter won’t fully charge an iPad, however. I was able to charge my fully dead iPad Air to about sixty percent before the Quarter’s battery was exhausted. For those wondering, the Quarter’s USB output is rated at 5 Volts and 2.1 Amps.

If you’ll be using the Quarter on a regular basis, you might want to get an optional MagSafe car adapter to recharge the device on the go. This gives you a piece of mind knowing you’ll always have juice to run for the full business day (hello, wall huggers!).

Despite the fact that the in-car charger sports the MagSafe adapter on one end, you cannot charge your MacBook with it as it was designed solely with the Quarter in mind.

So, how does Beaver manage to get away with using MagSafe technology given that Apple does not permit accessory makers to build MagSafe-enabled gear? To be perfectly honest, this is a million dollar question that might ultimately determine the Quarter’s fate in the marketplace. 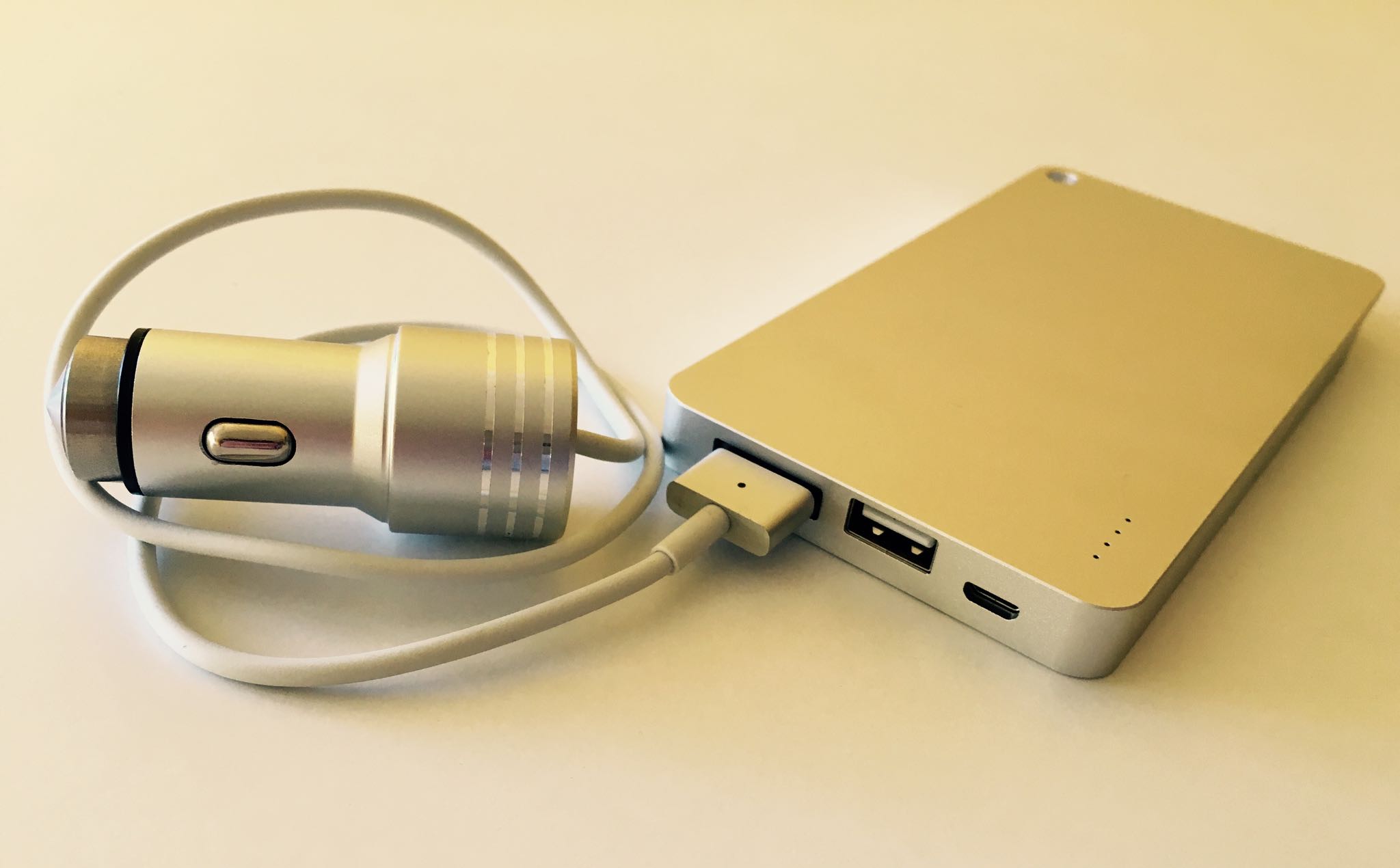 Beaver is blunt about designing the device without Apple’s approval, using third-party MagSafe components. Knowing Apple owns exclusive patent rights to MagSafe for use with its own products, I hope the Quarter won’t get pulled.

That would be quite a shame because the Quarter is a reliable and quality product. The project founder tells me they took the risk and built the Quarter after reaching out to Apple and receiving no response whatsoever. 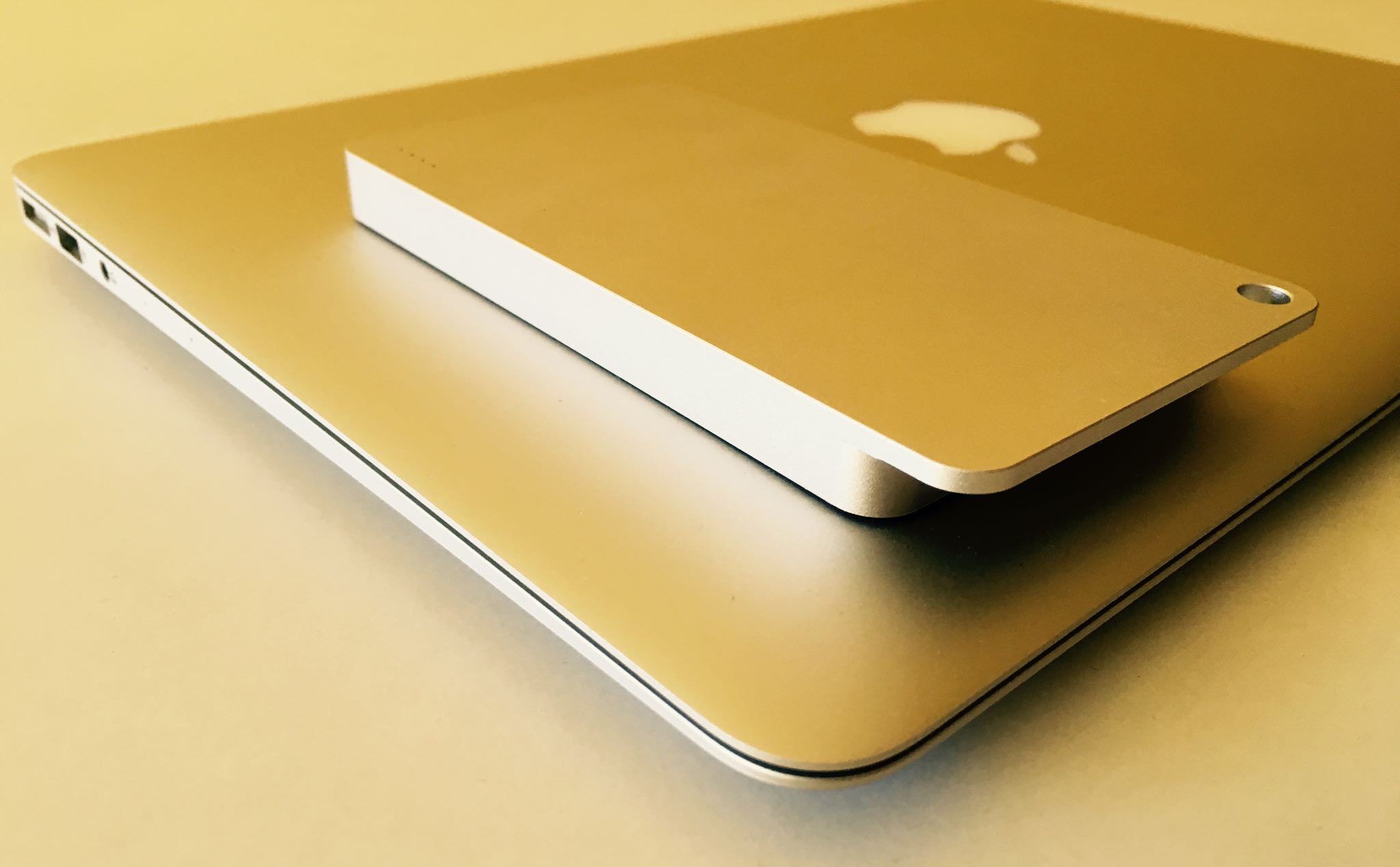 Beaver is not alone in this as a couple other MagSafe-based accessories have been announced. “Also we are still trying to get license right now,“ says Beaver.

At any rate, Beaver could have worked around MagSafe restrictions by equipping the Quarter with a USB Type-C connector because USB-C can handle up to 100W. Maybe the company has licensed MagSafe from Apple or found a way around Apple’s patents?

Smart circuitry to protect your devices

“We managed to reduce the internal resistance by optimizing the li-ion polymer battery,” claims the company. “This gives the Quarter the ability to endure higher charging power.” Overall, the device achieves a high 93 percent charge/discharge efficiency. 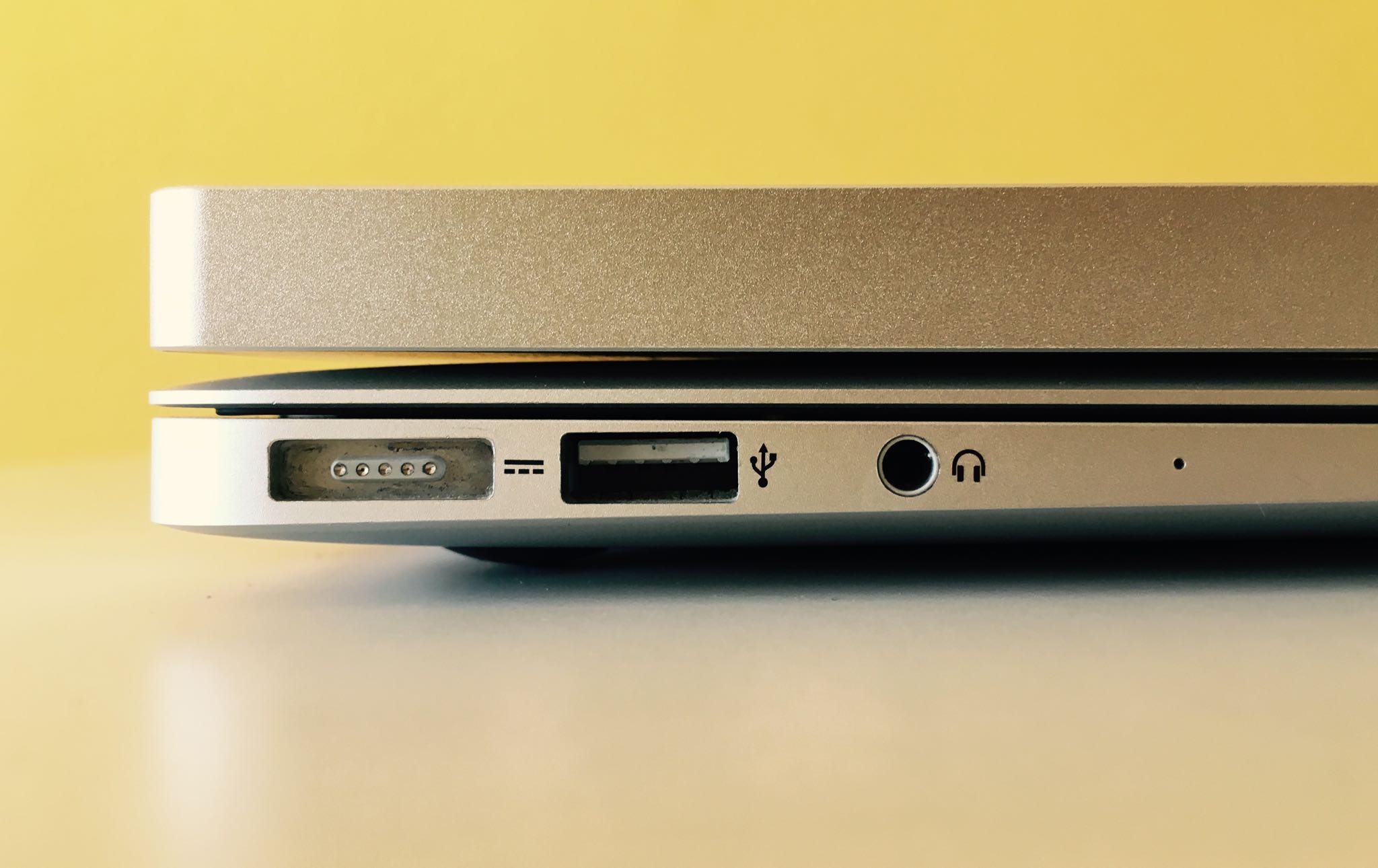 The accessory recognizes your connected device and adjusts its output current for safety and optimal battery life. Beaver also doubled the core battery voltage from the normal 3.7 to 7.4 Volts.

Having used dozens of external battery packs, I can safely say that the Quarter is very competitive. Tired of constantly searching and waiting at the nearest power outlet to charge your phone? Not happy with your current mobile juice pack?

If so, I’d say you couldn’t go wrong with the Quarter. Though just slightly bulky, it can easily slip straight into your pocket or a bag and works as advertised. And with fast MagSafe charging, the Quarter has a slight edge over most other battery packs. 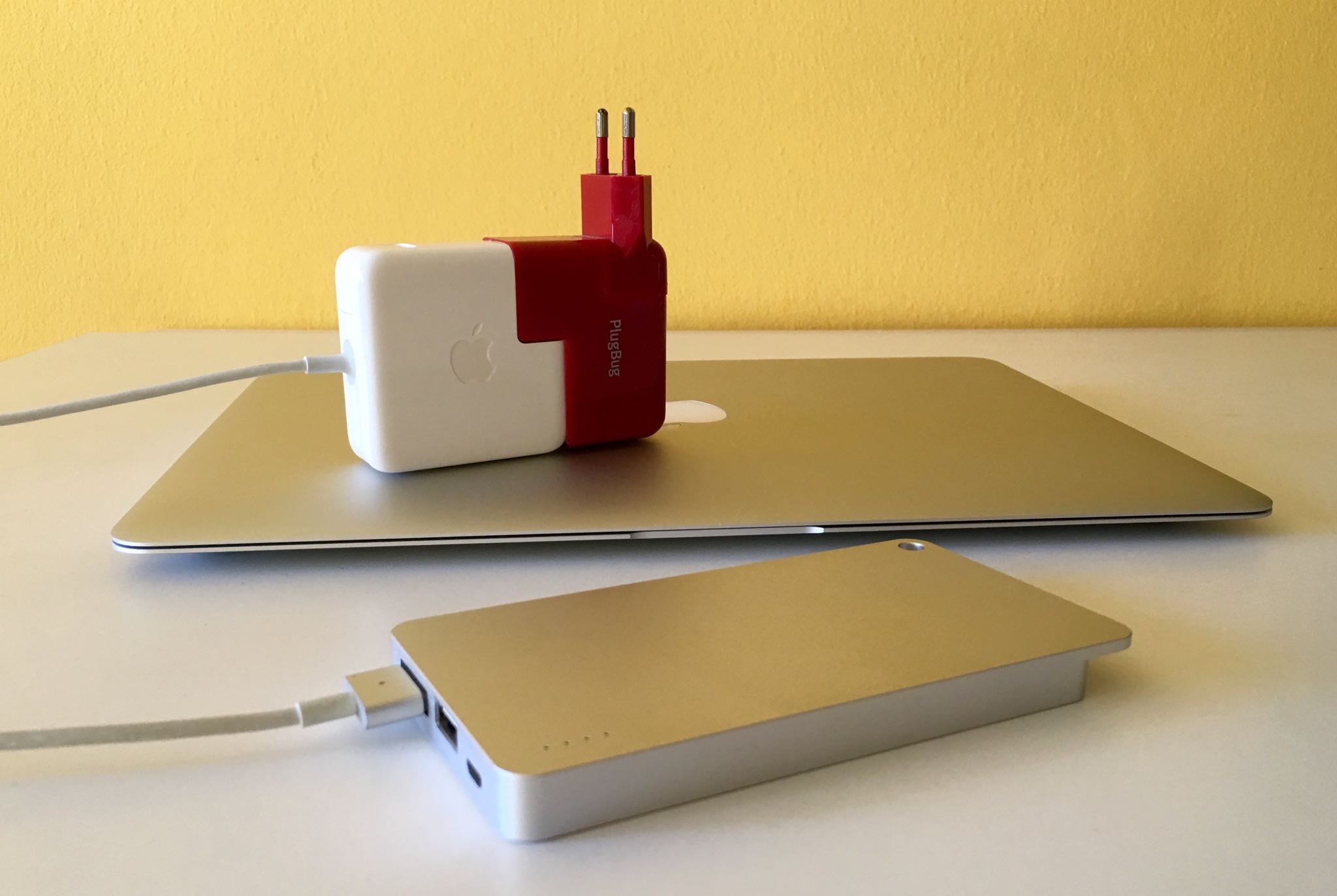 The Quarter is an inexpensive, solidly built battery pack with enough capacity to fully recharge any iPhone. And it certainly doesn’t hurt that it looks good.

The Quarter PowerBank is currently available for pre-order from the crowd-funding site Pozible for an early bird supporter price of $39. The car adapter is an additional $16.

Orders will begin shipping in mid-November, with shipping times about 4-10 days for the United States and Europe and 10-20 days for other countries.