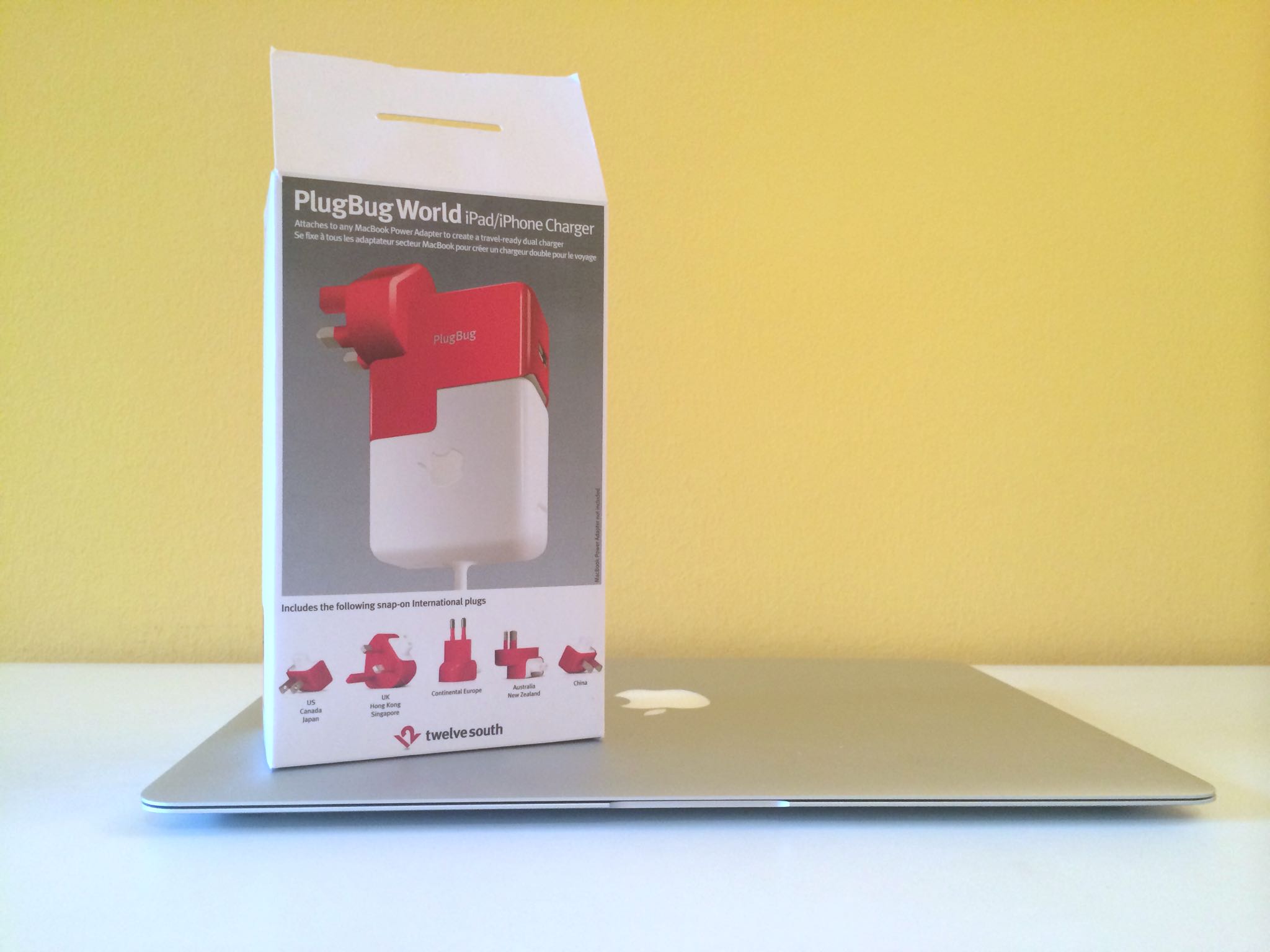 Aren’t you sick and tired of those unsightly, clunky wall chargers lying underneath your desk? I’m all for simplification so solutions that cut down the number of power adapters needed to juice up my devices are bound to win my attention.

Twelve South’s PlugBug World is a cute hybrid charger which connects to any MacBook brick or Apple USB wall charger.

By integrating an additional 2.1-Amp USB port, this compact accessory can quickly recharge any iOS device, or a lower-powered USB device, while feeding power to a MacBook at the same time.

Continue reading as I let you in on the PlugBug’s little secrets, such as its cunning adaptability, versatility and smart design choices that make it stand out from other products and turn it into an indispensable companion in your mobile arsenal.

In a word, it’s the charger Apple should have made itself.

Basically an international edition of the multi-purpose PlugBug that Twelve South originally launched as an accessory for MacBooks, the World includes five different snap-on plugs so you can use it with most power outlets around the world. 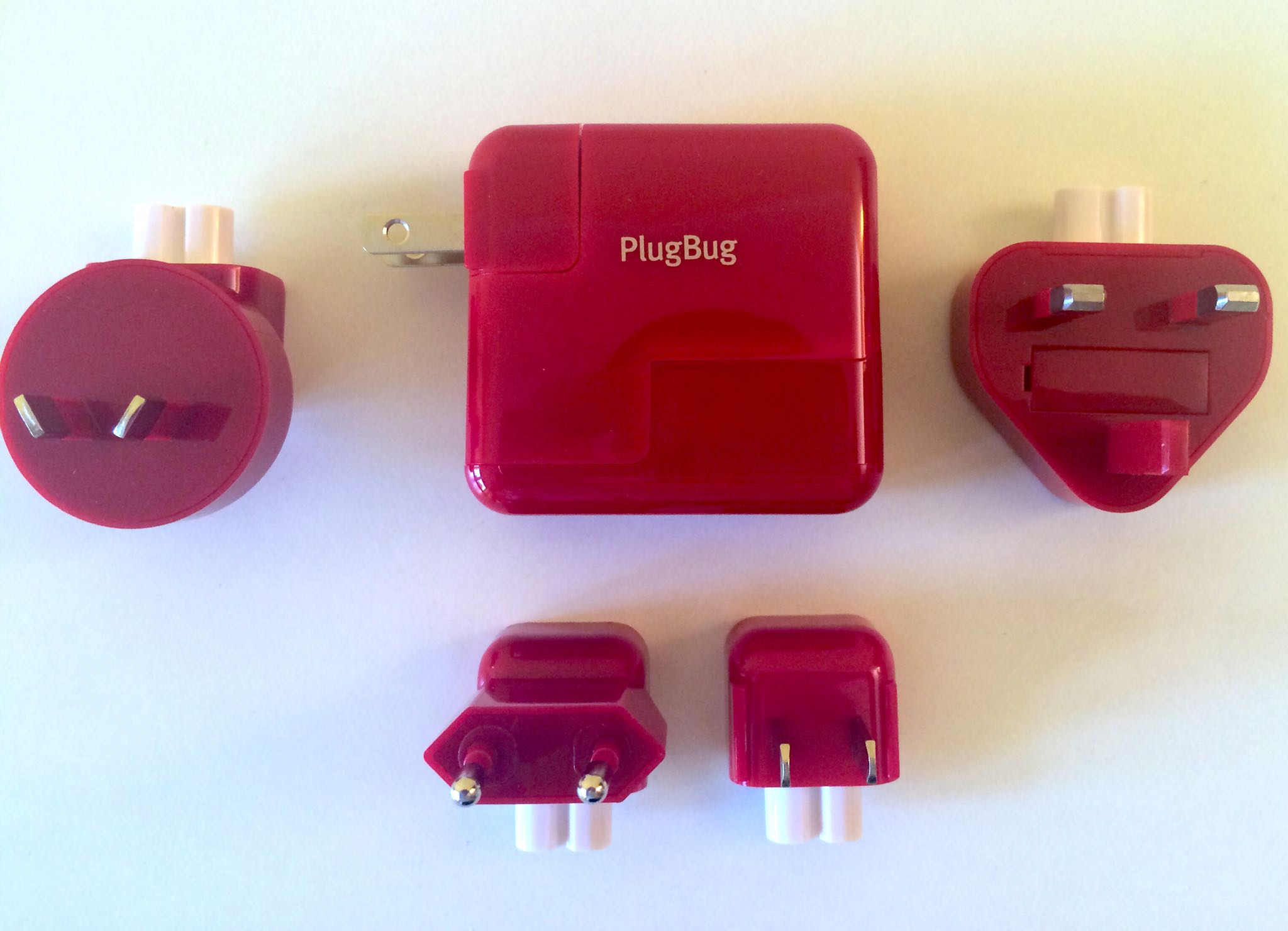 The accessory packs in a power adapter, a USB charger and a metal tip. The built-in USB port puts out 10 watts of power at 2.1 Amps, allowing you to juice up a power-hungry iPad or fast-charge an iPhone (which ships with Apple’s 5W USB Adapter) or any lower-powered USB device.

Its multi-purpose metal tip makes it easy to snap the World conveniently onto the standardized metal prong found on Apple’s cleverly designed MacBook and USB chargers with the white removable duck-head. 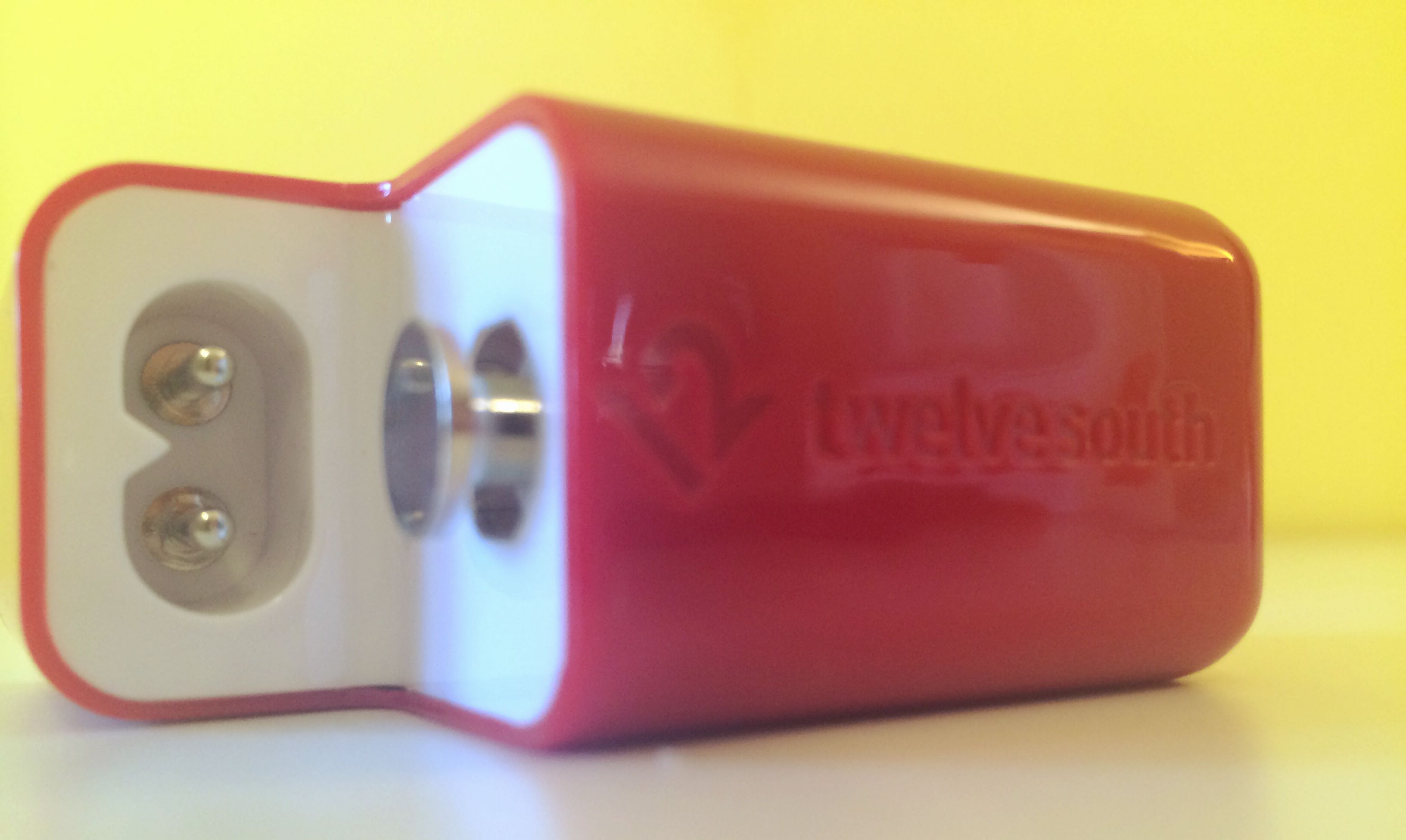 In addition to recharging both your Mac notebook and an iOS device, attaching it to Apple’s USB adapter effectively doubles the number of USB ports.

As mentioned before, sliding the PlugBug onto a MacBook brick and attaching a mobile device to its USB port enables a scenario where both your Mac notebook and a favorite iOS device charge simultaneously. This is the most common use of the World that the vast majority of users will immediately recognize. 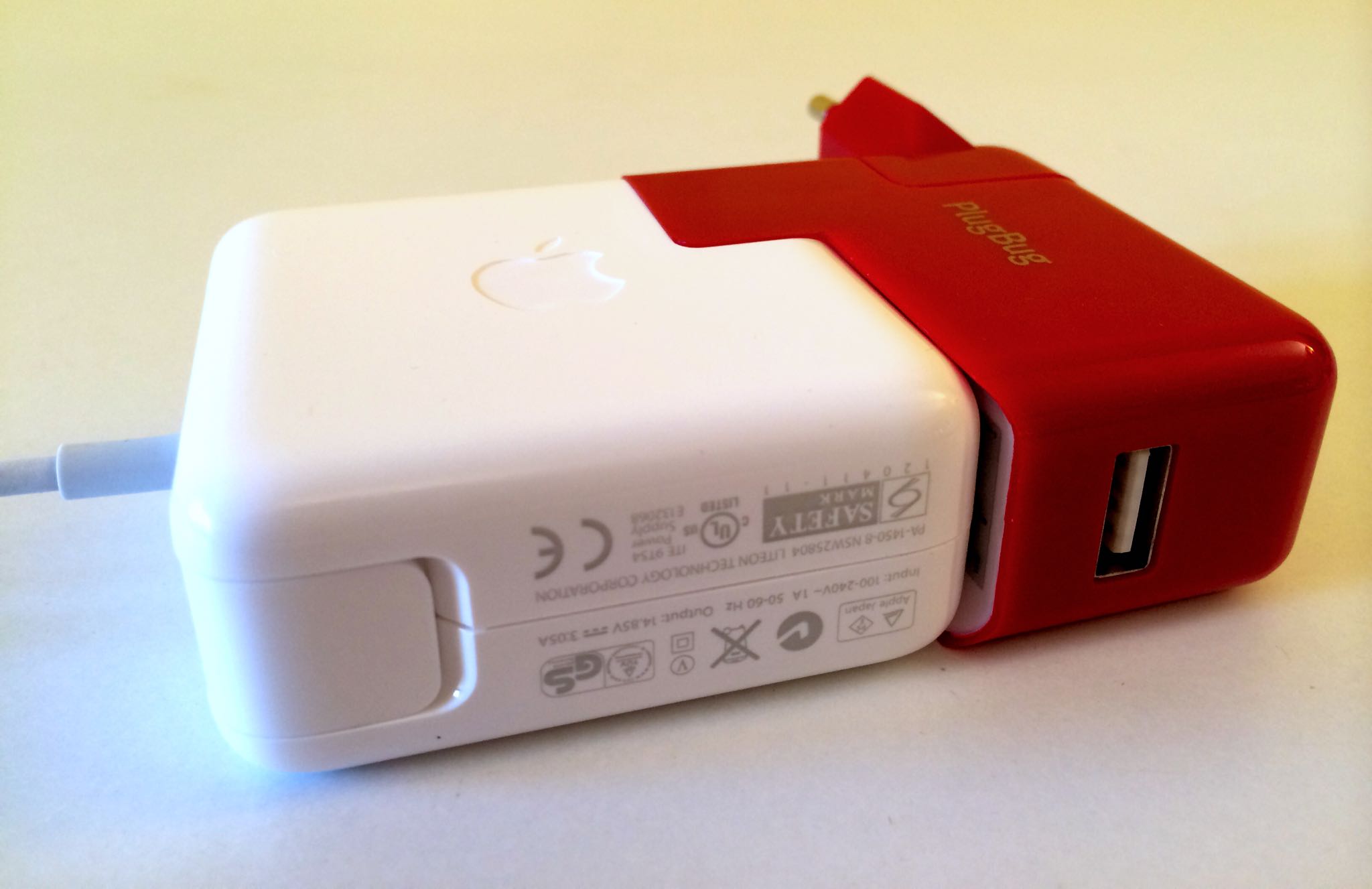 A less-obvious scenario calls for attaching Twelve South’s charger to an Apple USB Power Adapter. This configuration gives you two USB ports so you can simultaneously charge, say, an iPhone and iPad. 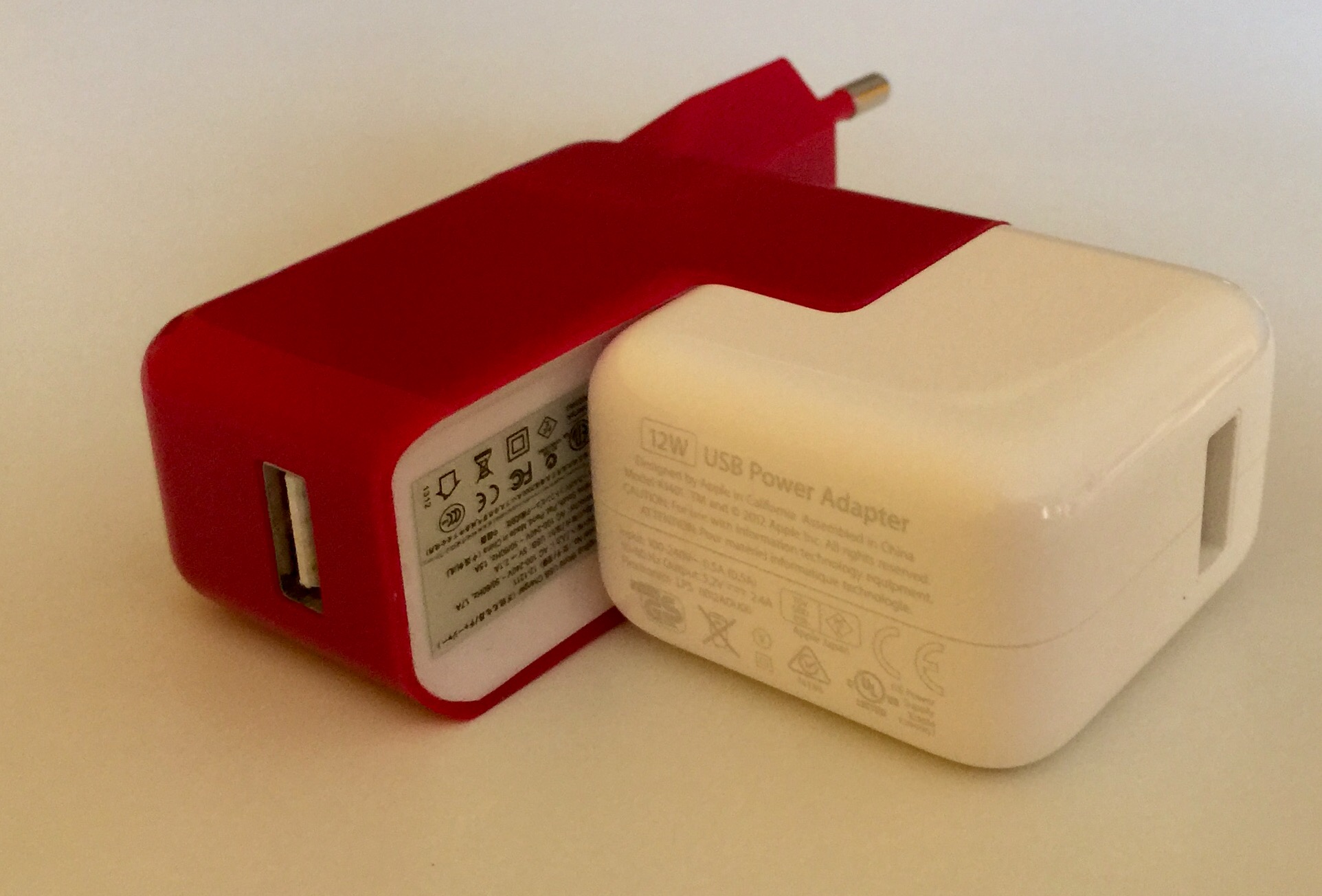 Of course, it can charge other USB-powered mobile devices as well, such as LTE hotspots, non-Apple tablets and smartphones, portable wireless speakers and so forth. Finally, the World can act as a standalone charger: simply slide a third section of the PlugBug into the main body for seamless appearance. 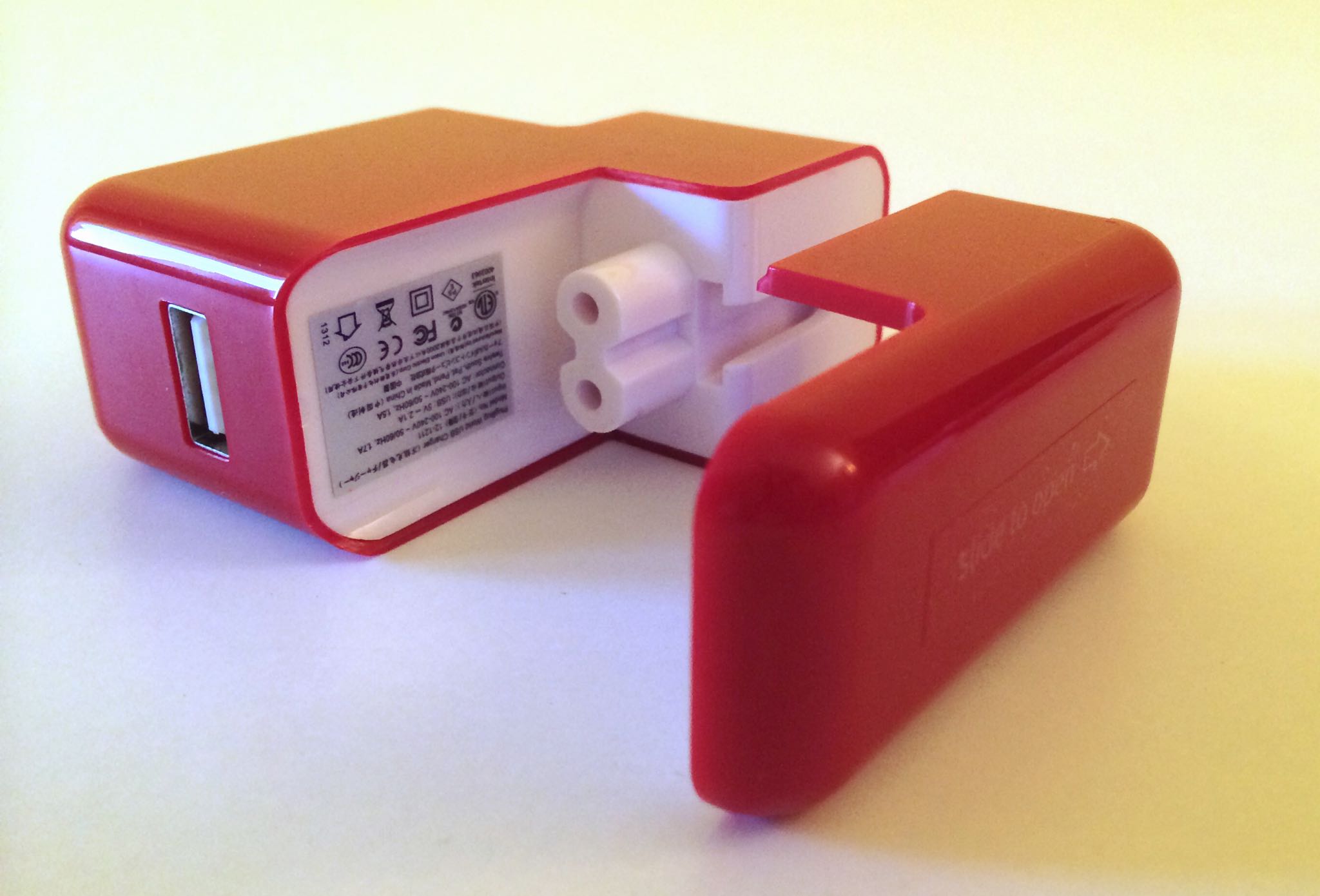 The PlugBug World bears all the hallmarks of Twelve South’s sophisticated and enduring design. Its smooth plastic enclosure is sturdy and glossy, giving the World a premium feel. Twelve South’s design language isn’t just a visual dichotomy between the sexiness of the World’s striking red appearance and the coldness and neutrality of Apple’s snow white chargers, but also serves a very practical purpose.

As in, red makes the World easily identifiable on travels, making it stand out in your backpack. I’ve also found that the World’s fire-red appearance has made it a lot easier to spot my power supply in an instant. 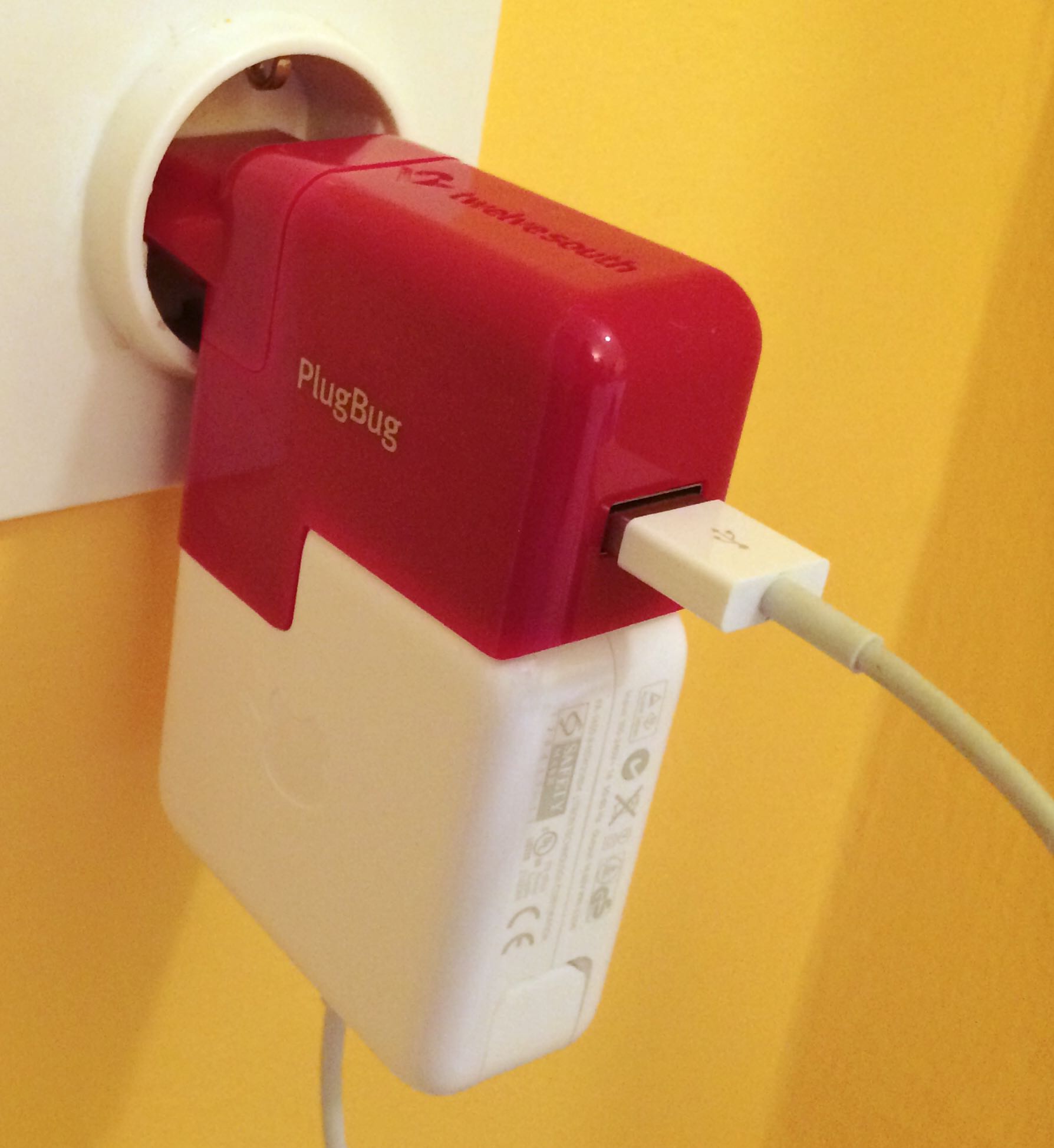 Now, I’m cognizant of the fact that some people have complaints on build quality of Twelve South’s products. I’m not really sure where that’s coming from as this has not been my experience with the PlugBug World, or other Twelve South products for that matter.

As someone who blogs for a living, I write in a variety of settings. I must have plugged my World into dozens of different wall outlets in hotel rooms, dormitories, apartments, coffee shops and restaurants. 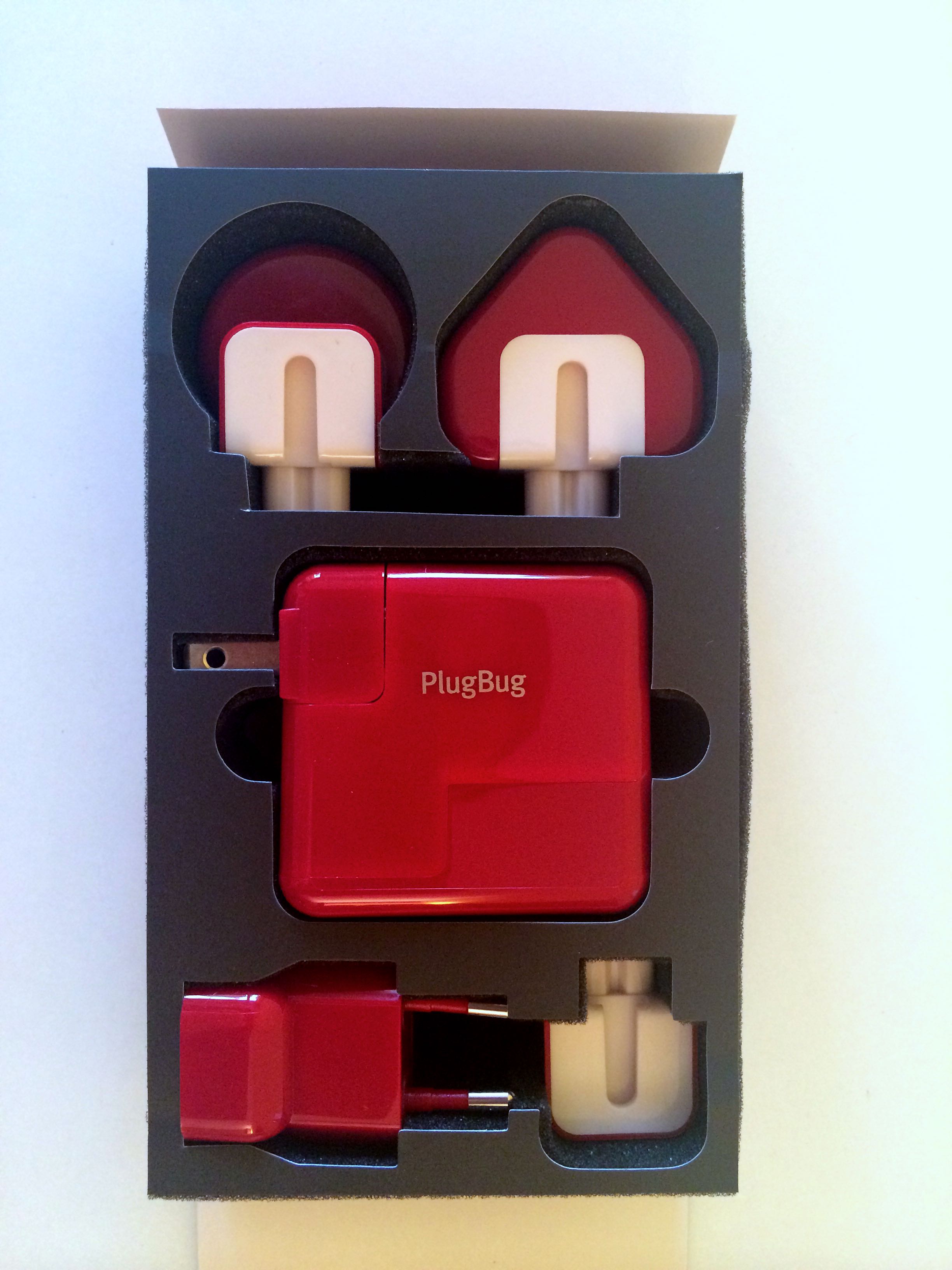 Even though it’s been my daily driver for the past six months or so, it has yet to show any signs of wear and tear stemming from daily use.

The PlugBug is compact and charming. 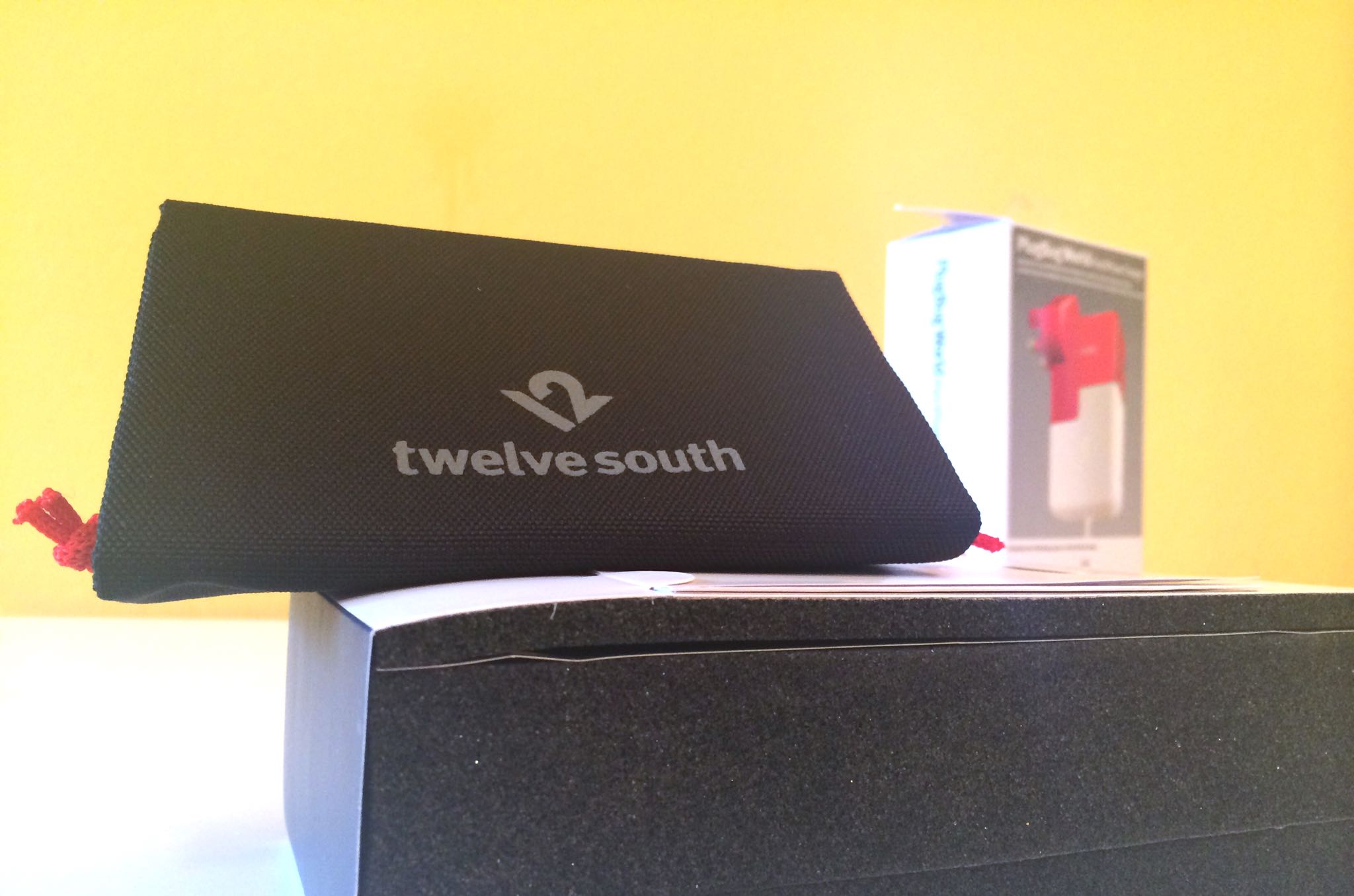 A handy, small pouch is included to stowe both it and the plugs inside while you travel, commute to work and so forth.

On the downside, I wish the PlugBug provided 2.4 Amps of power like Apple’s 12W USB charger does. Be that as it may, the built-in 2.1-Amp USB port puts out enough power to recharge non-Retina iPads at full speed, or any iPhone and iPad mini model at double the speed of the charger it ships with. 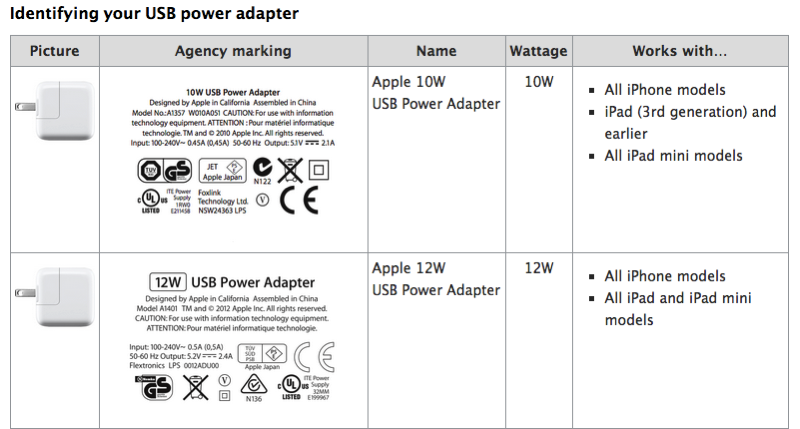 The crazy-useful PlugBug World is the only travel charger you’ll ever need.

It’s incredibly versatile and way more capable than Apple’s $40 World Travel Adapter Kit. For just a $5 extra over Apple’s kit, the PlugBug World frees up USB ports on your Mac while giving you double the power of many existing wall chargers. 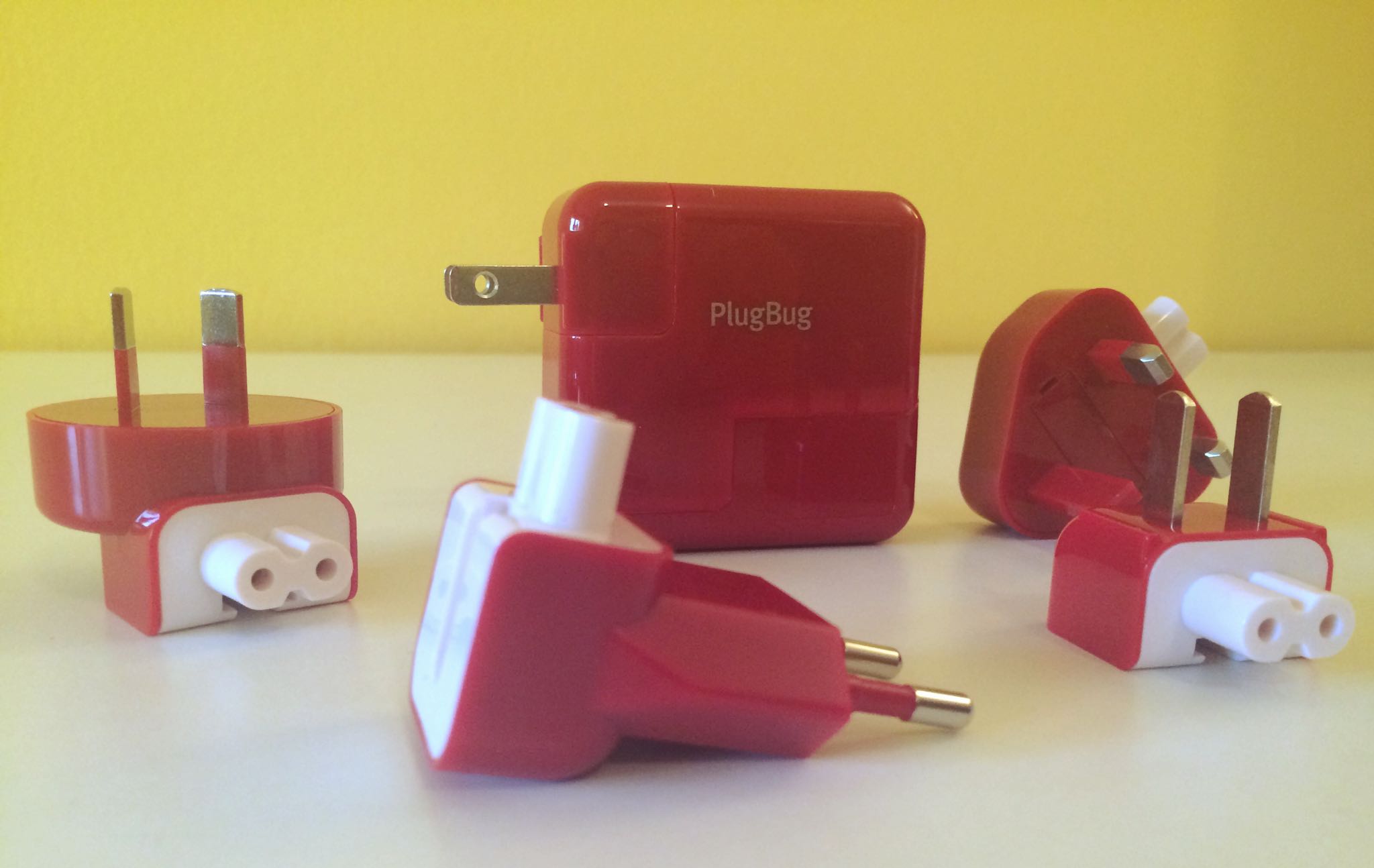 Now, I’m perfectly aware that a $45 charger may not be your cup of tea. But bear this in mind: price is important but satisfaction is what you pay for.

In that regard, Twelve South’s nifty little charger delivers.

Summing up, the World simultaneously charges your MacBook and your favorite iOS device, or any USB-powered accessory for that matter. It includes handy world adapters for hassle-free plugging into most wall outlets you’ll encounter.

And piggy-backing it on Apple’s own 10W/12W USB power adapters turns it into a standalone charger with double the number of USB ports so you can charge two iOS devices at the same time.

What more could a power user ask for?

The PlugBug World is $45 over at Amazon.

Have you used the PlugBug, or any other Twelve South product before? If so, share you impressions down in the comments.

Which third-party chargers are your favorites and why?