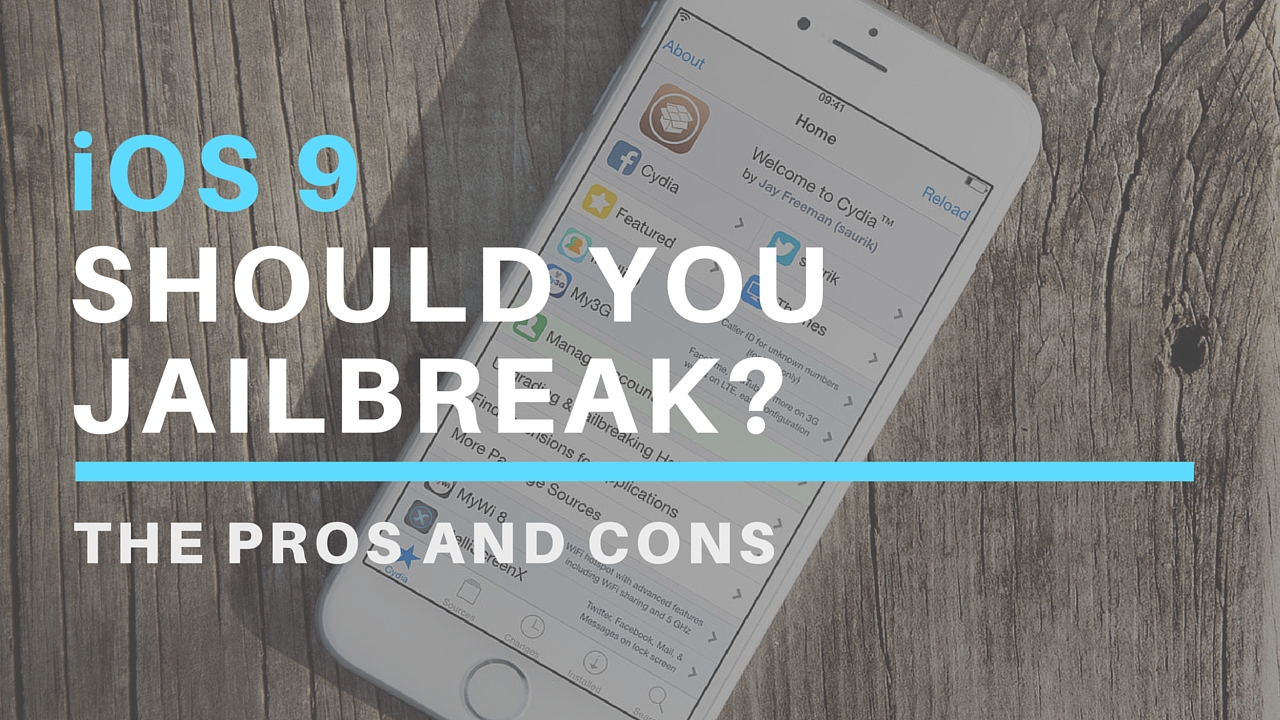 Every year, it seems jailbreaking loses a little bit of its appeal. It’s not that the community is dying. It’s just that hardware and software upgrades brought to iOS devices can make it a little less compelling to jailbreak.

If you are on the fence about jailbreaking, take a moment and read the next few paragraphs. I won’t try to convince you to make the jump, because ultimately, jailbreaking is a personal decision, which as you will see, has much more drawbacks than benefits to offer.

Pangu9 is currently buggy: although the tool is safe from a security standpoint, it is still a pretty buggy process, with users reporting various issues such as being stuck during the process, getting stuck in a boot loop, and having to restore their devices. It appears it is just a minority of users encountering issues with the jailbreak process, but it is still worth mentioning. The good news is, no matter what happens, you cannot possibly brick your iPhone or iPad, so there is nothing to worry on that front. The other good news is that the Pangu team is working hard to crush all these bugs. As a matter of fact, they have already released an update to their tool, and more are on the way.

Pangu9 is Windows only so far: this can be a major drawback for people like me who don’t have a Windows PC. Sure there are ways to make it happen. Our own Jeff Benjamin wrote a detailed tutorial on how to jailbreak iOS 9 with Pangu on Mac using a virtual machine, but it is still more trouble than some would want to go through at this time. The bright side is the Pangu Team is working on a Mac version of the jailbreak, so once again, it seems we’ll just have to be patient.

It’s a hassle: do you remember the good old days of JailbreakMe? You could just navigate to a website from Safari and initiate the jailbreak process directly from there. Gone are these days. Nowadays, jailbreaking is a process. You must download a tool to your computer, and your device must be set up a certain way. For instance, you must turn off Find My iPhone, and maybe more inconveniently, it is highly recommended that your iPhone be updated to the latest software version via iTunes, and not Over The Air. Of course some users disregard that requirement (I have in the past), but that opens the door to troubles going forward.

Some tweaks aren’t updated yet: are you excited about getting your old favorite tweak on your iPhone 6s right now? Well, don’t get to hyped up, because there are strong chances it hasn’t been updated for iOS 9 or your specific device quite yet. If many tweaks work right off the bat with iOS 9, many don’t, which means you will have to wait for developers to update them. Patience, once again seems to be of the essence. To find out if your favorite tweak works on iOS 9, have a look at the iOS 9 jailbreak tweaks compatibility list.

Is it worth it to you? This is probably the most important thing to consider! Is jailbreaking still worth it to you? What are the main reasons to jailbreak? Whether you are jailbreaking for adding functionality to your device, for customizing it, or simply for the feeling of freedom that comes with it, you have to ask yourself if it’s worth it to you. iOS 9 and iPhone 6s come with both hardware and software improvements that might make jailbreaking less appealing to you. Take that into consideration and figure things out.

Security concerns: by jailbreaking your device, you effectively remove the walls Apple has built to protect you. If done responsibly, jailbreaking can be safe, but there are certain basic rules to keep in mind. Theoretically, jailbreaking makes your device much more vulnerable to a possible hack. There is no arguing that. But in practice, we’ve seen many times before the jailbreak community can be faster than Apple at offering fixes for major vulnerabilities.

Upcoming tweaks are exciting: if you jailbreak to add features Apple wouldn’t allow, then you have to be thrilled at the potential for upcoming tweaks taking advantage of 3D Touch, or piggybacking on iOS 9 features that are exclusive to certain devices, such as Forcy. This is arguably the most exciting and most worthy reason to jailbreak. I know this is why I do it. If you were on the fence about jailbreaking because of all the reasons I mentioned above, maybe this will steer you in the right direction.

If you are on the fence about jailbreaking after reading all this, then I suggest you just don’t. Maybe give yourself some time. That’s actually what I’m doing. I do want to jailbreak my device, but there are just too many negatives right now to make it worth my time, though something tells me once a Mac version of Pangu is released, I’ll probably be among the first people to download it.

Tell us what’s on your mind. Join the iDB community in the comments section and share your reasons to jailbreak, or not to jailbreak.