The new Swarm 3.0 for iOS, which released earlier this morning, brings back leaderboards after gaining mayorships early in the summer. In addition, messages and notifications have been unified under a single inbox view.

Your worldwide and nearby views are now folded into a single Friends tab and a revamped Here Now section is now located under the Nearby section.

The leaderboards are back in Swarm!

You can now compete with your friends as every check-in earns you coins which determine your position on leaderboards. Earn bonus coins for streaks, mayorships or any out-of-the-ordinary check-ins.

In addition to bragging rights, those who manage to finish near the top of their leaderboard will earn virtual prizes. 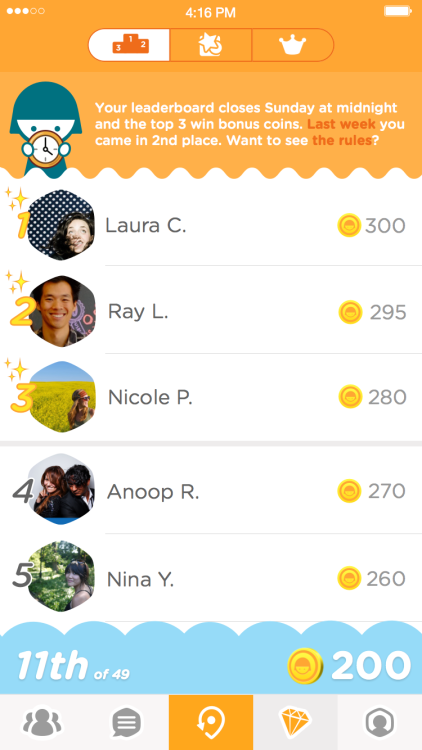 It would appear that Foursquare has bigger plans for virtual coins in the future. “For now, they’ll just help you beat your friends and conquer your leaderboard, but stay tuned for more fun to come,” release notes tease.

The app’s interface is now more streamlined and less confusing thanks to a trio of changes. For starters, no longer are your messages and notifications split into two separate sections. From now on, you can access them within a single inbox view.

Similarly, keeping up and meeting up with friends is now easier than before because the Worldwide and Nearby views have been combined into the Friends tab located alongside the bottom of the screen.

And finally, a revamped Here Now section in the Nearby view lets you see everyone who’s checked in with you to restaurants, bars, movie theaters and others place of interest. “Now when you check in to a place, we’ve made it even easier to see who else is there,” developers noted.

I’m not sure if it’s a change for the better, but the new Swarm app icon doesn’t move me. It’s less legible than before and that thick border definitely does not fit the overall look and feel of iOS 7 and iOS 8.

Here’s the before (at left) and after (at right).

Swarm supports any iPhone or iPod touch model with iOS 7.0 or later.

The app lacks a native interface on iPads and is optimized for the iPhone 5/5s/5c and iPhone 6 screen resolutions, but not for the 5.5-inch iPhone 6 Plus screen. Swarm is currently localized in English, Catalan, French, German, Indonesian, Italian, Japanese, Korean, Portuguese, Russian, Spanish, Thai and Turkish.

The software lets you check in to nearby places right from your Lock screen with a handy Notification Center widget on iPhones running iOS 8, and includes a WatchKit component with a glance and an Apple Watch app for your wrist.

Download Swarm free of charge in the App Store.