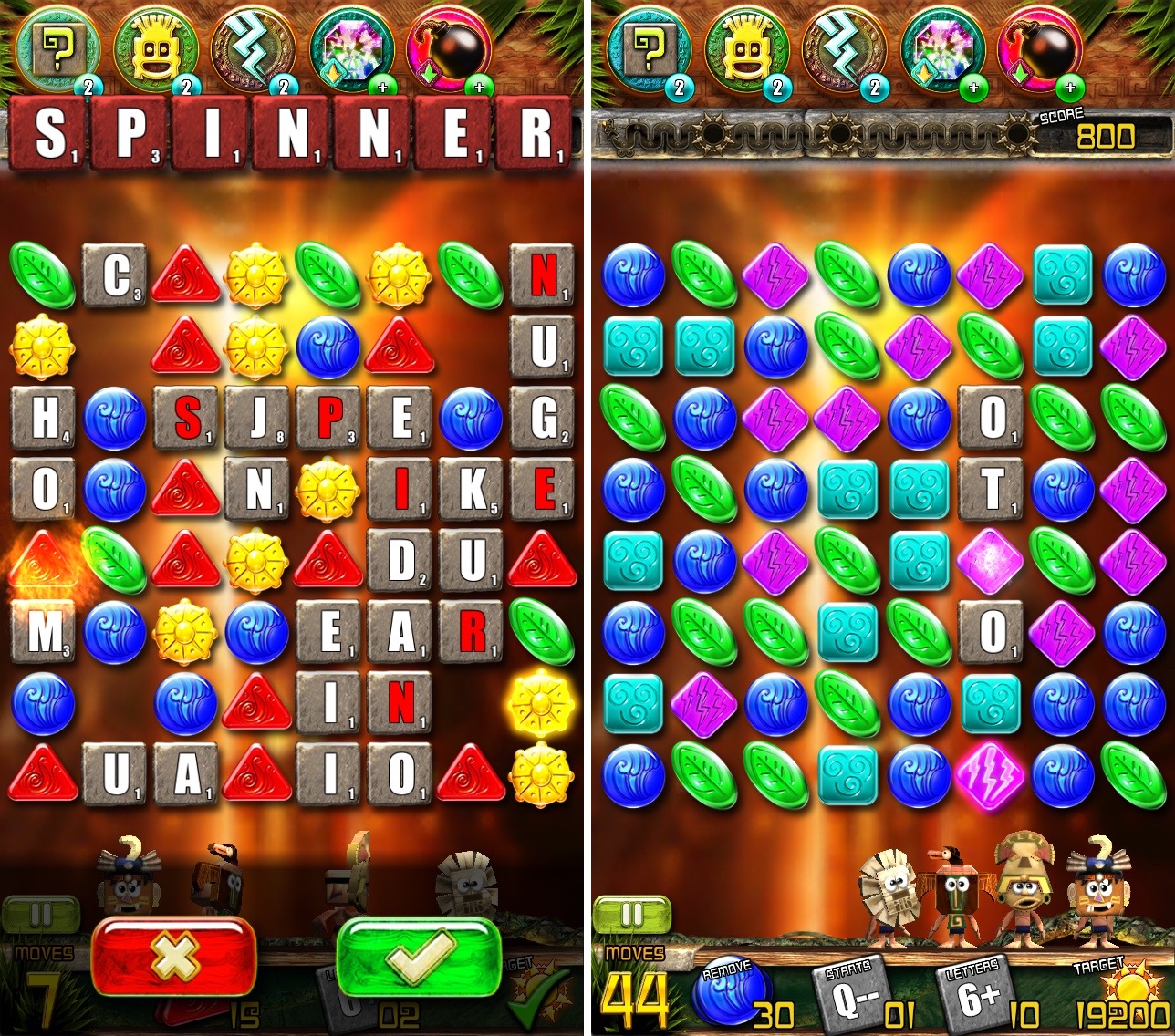 I love playing word games, like Scrabble or Words with Friends. I also have a soft spot in my heart for the simplicity of mindless match-three games. So, it is only logical that I’d be drawn to a game that combines them both.

Languinis is a match-three word game that is both charming and entertaining. It appeals to puzzle gamers in two different genres. We’ve got a full game review of Languinis for you today.

You must help rescue the Languinis from the Phoenix god, who imprisoned the little creatures because they grew lazy after trying to name every single thing on the planet. To rescue them, you must travel across various islands, solving the god’s puzzles. Once you have defeated him, you will free one Languini from his prison and move onto the next island.

Players competed on a grid of elements. Using wind, fire, water, the sun, and more, players turn elements into letters and letters into points. Match more than three elements to produce a special one that clears a row or column.

A group of little Languinis walks around at the bottom of the screen while you play your game. If you misspell a word, they will shake their head at you, and one of them will boot another right off the screen. It’s OK, he comes back. 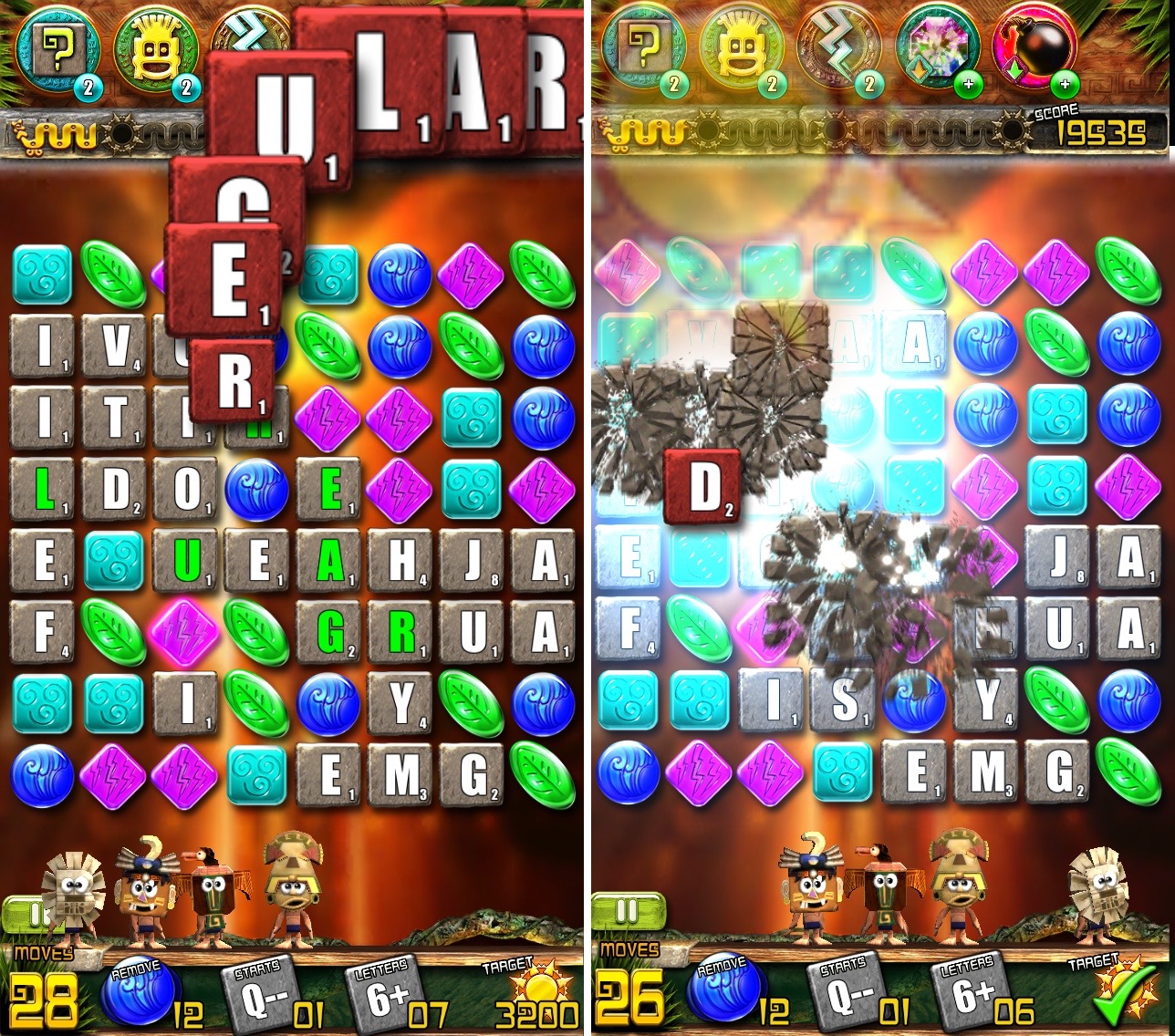 To free the Languinis, players spell words using letters that appear when three or more elements are matched. Each level has a set of goals you must achieve to continue. You only have a certain number of moves in a round. If you don’t reach the goals within the move limit, you will lose a life and must play the same round again.

If you achieve the goals with moves leftover, those moves are added to your final score.

At first, goals are fairly simple; spell six five-letter words, or match 20 green leaves. However, things get heated up once you make it to the third island. Here, you will have to hunt down words that start with “Q” or spell eight-letter words. Plus, you’ll still have to match elements and reach a minimum score.

You can call on the Phoenix god for help. He can destroy a letter or element, bomb an area, or remove all of one type of element from the screen. He can also find the longest word on the screen, which is always something I’ve never heard before.

You can also start each round with one power up already on the grid, like a bomb. All power ups cost gold. Sometimes, the Phoenix god will give you something for free, but the game designers need to make money somewhere, and power ups are it.

When you get to the last round of an island, you will have to rescue a Languinis by removing all elements and letters from the row he is standing in. When he gets to the bottom of the row, he is free. Then, you will collect his character card and read more about his history and personality. That Languini will then join you at the bottom of the screen while you play. Eventually, you will collect all 26 of the trapped little men. 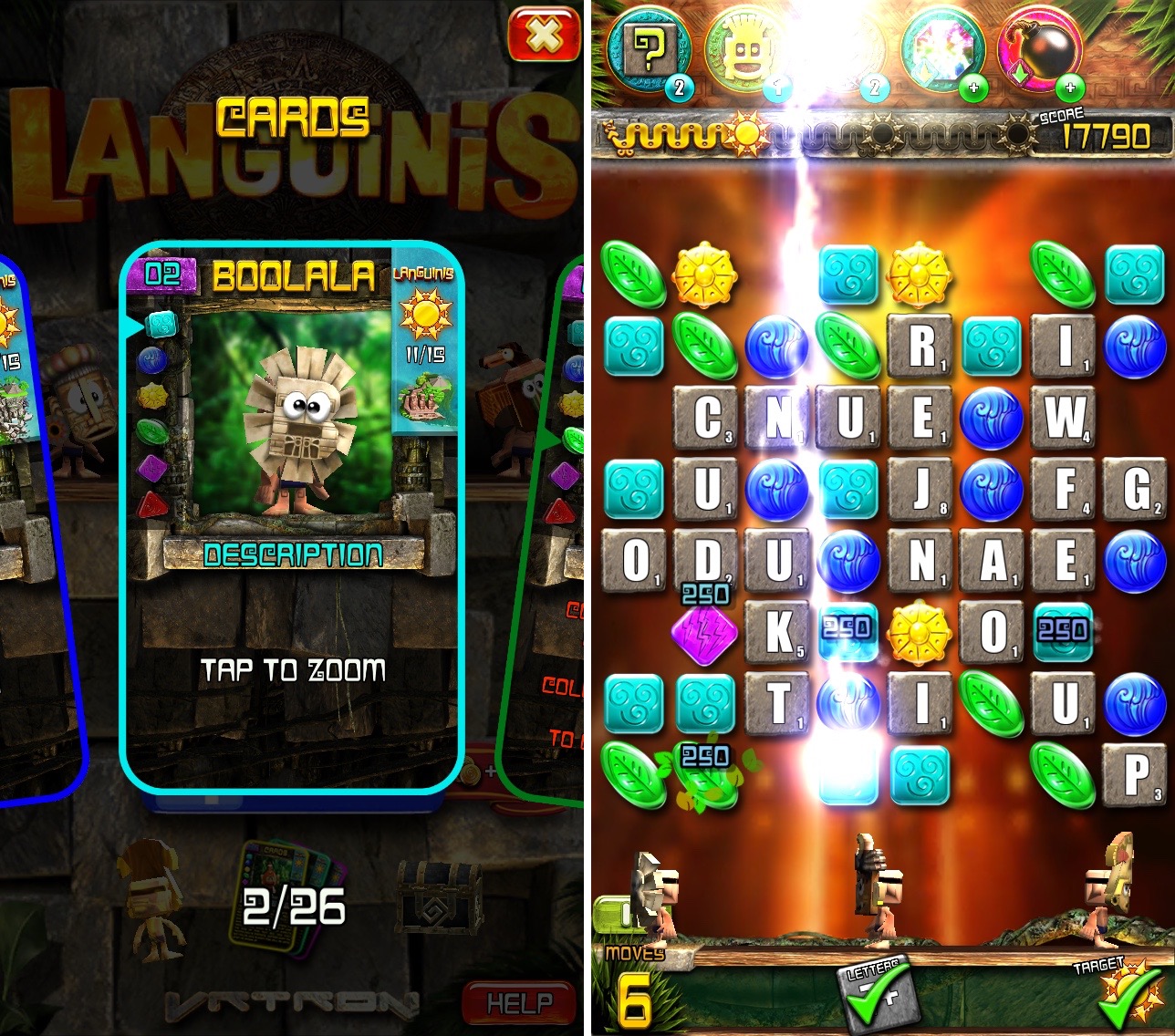 This game could have been good enough by simply having you score points for matching three and spelling words. But, the added goal requirements make you think about your strategy and plan moves ahead of time in order to reach them before running out.

Once you hit the third island it becomes much harder to complete all of the goals. With the help of power ups, you can be successful, but without them, you might be stuck for a very long time until luck lands on your side.

Languinis is free to download. It does have in-app purchases in the form of power ups. As noted above, eventually, you will find yourself using more and more power ups, which costs more and more money. So, you will probably end up dropping a couple of dollars on this game before you beat it entirely.

I love playing this game and definitely recommend it to fans of word games. However, because of the inevitable pay wall, it is slightly less appealing. It is still worthy of your time, however. This game is available on the iPhone, iPad, and iPod touch. You can download it in the App Store today.

You can almost call this game a mash up between Candy Crush and LetterPad.

What do you think of this puzzle mash up? Let us know in the comments below.