Critics have been saying for years that Nintendo should get into the mobile gaming business. It’s not just that the company’s hardware business is slipping, or that it’s losing money, but mobile games happens to be a very hot space right now.

Here’s more on the report from A List Daily (via TouchArcade):

King’s $641 million turnover puts it just behind Apple at number 7, based on its first quarter as a public company and debut in the Newzoo ranking. To put this performance into perspective: King generated 56% more game revenues than Nintendo, ranked at number 10, in the first quarter of 2014. Its flagship title, Candy Crush Saga, generates around two-thirds of King’s revenues which alone is more than all Nintendo game earnings in the first quarter put together. Of course, Nintendo’s strong fourth quarter is still to come but chances are in favor of King to end up above Nintendo for the full 2014 calendar year. 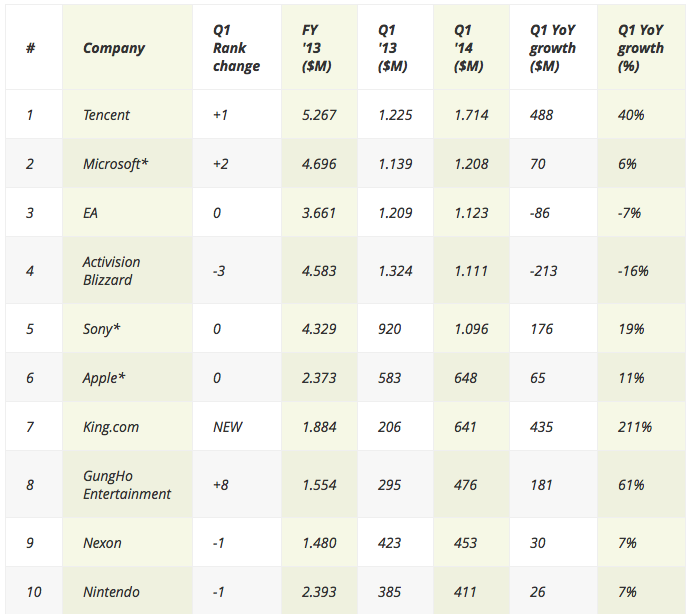 Of course, there are several asterisks here. Newzoo says the data is based off of various estimates and assumptions, which may or may not have been indicated explicitly. It also warns that hardware sales were excluded, and not all companies report in USD.

Still, even if the data is off, it’s not likely off by 50%. So the claim that Candy Crush Saga, currently ranked as the #2 top grossing app in the US App Store, generated more revenue than all of Nintendo’s games put together last quarter seems accurate.

For what it’s worth, Nintendo has said that it plans to start looking at mobile platforms more seriously—but not for games. Last month the company announced it was working on its first app for smartphones and tablets: a client for its Mario Kart TV service.