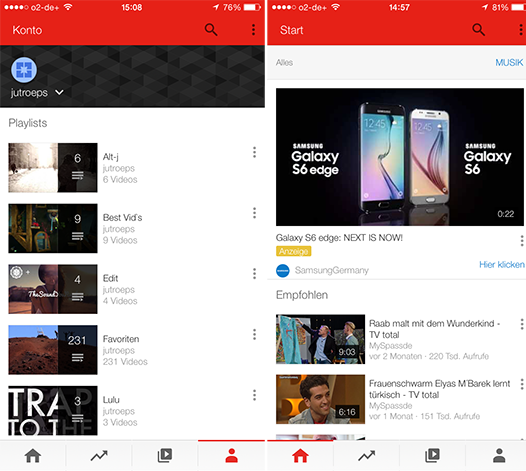 Google has been testing a revamped version of its YouTube application for the iPhone and iPad with a small subset of users, Abdiel Ortiz and Sebastien Debaenst noted on Twitter. This isn’t necessarily new as some folks have been talking about YouTube’s iOS overhaul for over a month now.

What is new, however, is a detailed hands-on video put together by Tech Invasion which gives us a first look at the new software centered on Material Design, Google’s design language guiding software development across mobile, desktop and the web.

If the video below is anything to go by, the app features a flatter appearance in line with iOS 8’s overall design style. In addition, it resembles YouTube’s recent redesign of the desktop interface and matches up nicely with the recently rolled out YouTube app for smart TVs and set-top boxes, including the Apple TV.

Specifically, YouTube’s branding is now more prominent with the red header at the top. You’ll also notice a brand new bottom menu with options to access a user’s profile and their videos, as well as checking out trending videos and your Home feed.

There doesn’t seem to be a much-needed Back button or advanced gesture support.

It’s cool that Google seems to be using a system similar to Facebook’s, which lets them beta test work-in-progress code with a small subset of users without having users really be aware they’re part of a beta program.

The Verge reported as far back as August 2013 that Facebook built an entirely new system for creating alternate versions of the native app within the native app.

“The team could then turn on certain new features for a subset of its users, directly, and measure the results. Starting in early 2013, the team put together a system of ‘different types of Legos — that we can reconfigure really easily … and see the results on the server in real time'”, explains the article.

The official Android app, for instance, was revamped with Material Design in mind nearly six months ago, back in December of 2014.

I wonder if this YouTube refresh will take advantage of a new video delivery method deployed in a new HTML5 video player that YouTube switched to on Mac and Windows desktops earlier in the year, ditching Flash for good.

For what it’s worth, YouTube on iOS has been using iOS-optimized video delivery since the iPhone’s inception back in 2007.

MacRumors reported that a redesigned YouTube app briefly appeared on some users’ iPhones a month ago before reverting back to the current design.

Like Gmail and the native Google search app, YouTube is central to Google’s presence on the Apple platform so a thorough redesign would be much appreciated.

Grab YouTube for iOS free in the App Store.