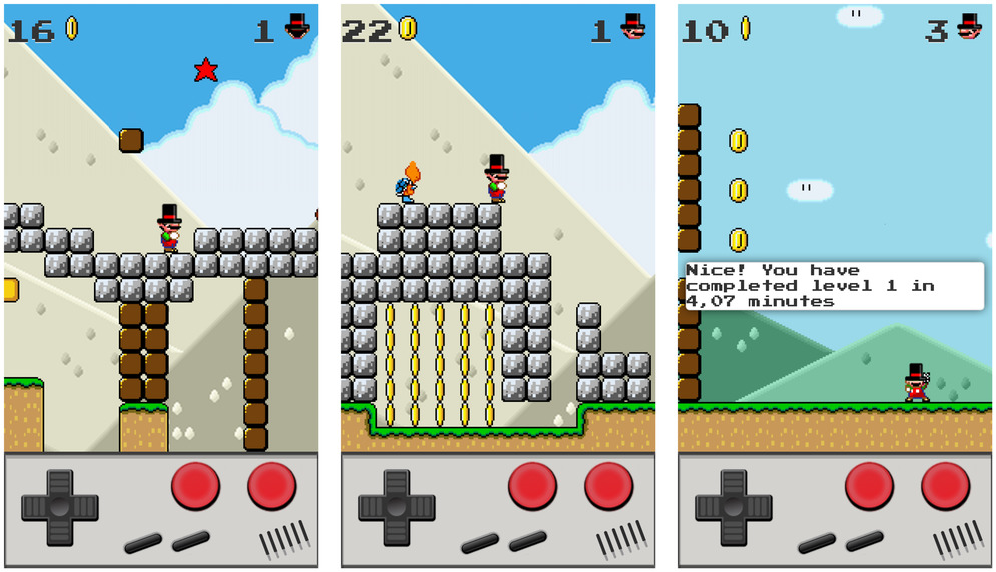 We’re not expecting this one to last long on the App Store so all you fans of retro gaming out there in search of a Super Mario Bros-like experience on your iPhone should act now before it’s too late.

I’m old enough so you can trust me when I say that Super Bros! by Greek developer Papadakis Kostas (not to be confused with Greek pianist Konstantinos Papadakis) is the closest thing to the original game.

Somewhat incredibly, Super Bros! has managed to get past Apple’s App Store review team and is available for download, for now. The $1.99 iPhone game is a total knockoff of the 1985 classic platform video game internally developed by Nintendo R&D4 and published by Nintendo as a pseudo-sequel to the 1983 game Mario Bros.

“Remember the old-school adventure games the good old days,” reads the blurb. “Now you can enjoy this classic adventure spirit for the first time on the App-Store.”

The game features 8-bit pixel graphics reminiscent of the golden age of home console gaming, with the controls (jump, run, hit and crouch) provided at the bottom of the screen in the form of an old-school gamepad.

If you’ve enjoyed playing Nintendo’s classic as a kid, you should love this clone. You’ll be defeating monsters by jumping, running and “hitting fireballs on their funny faces” while collecting coins, stars, herbs and other magical items along the way.

There are fifteen levels to enjoy, “combined with classic adventure tunes.”

Aside from a differently designed character, a Super Mario clone doesn’t get any more blatant than this so we’re fully expecting Apple to pull Super Bross! in hours.

The 7.6-megabyte app requires an iPhone or iPod touch with iOS 5.1.1 or later. It’s optimized for the iPhone 5, iPhone 6 and iPhone 6 Plus screen resolutions, but lacks the native iPad interface.