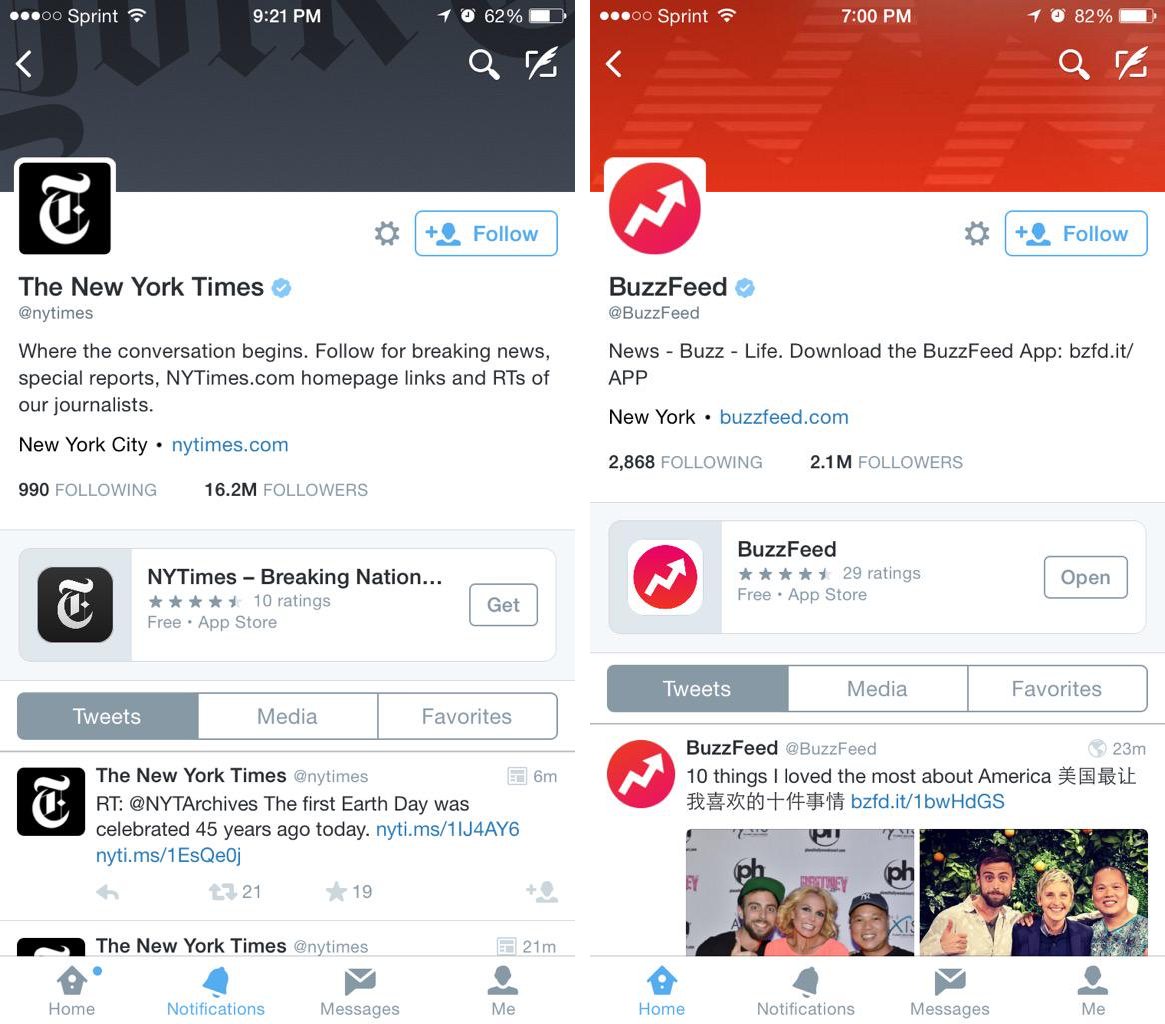 The official Twitter application for the iPhone and iPad is now showing certain apps on profile pages, as noted by Twitter user ‘ryan’. It’s a silent refresh on Twitter’s backend, meaning no update is necessary to your existing copy of Twitter for iOS. The web interface is unaffected by this nifty little change.

For the time being, it seems that mostly applications from major publications and brands are being highlighted, including ones by The New York Times and BuzzFeed, among others. In addition to branded news apps, other notable brands include Spotify and Twitter’s own Periscope.

In other Twitter news today, the company rolled out a daily summary of the best tweets to its Android app. Dubbed ‘Highlights,’ this opt-in feature was designed to ensure that users who haven’t checked their Twitter stream for a while are kept in the loop.

Based on accounts and conversations popular with users they follow, and a little bit of dark magic, Twitter will push a notification to those who opt-in. Your Highlight will basically be a recap of popular posts from the day, compressed to about a dozen tweets and personalized to you.

Highlights, a fast and simple summary of Twitter, lets you catch up quickly on the best stuff that is most relevant to you. To create your Highlights, we look at things like the accounts and conversations that are popular among people you follow, Tweets from people you’re closely tied to, topics and events that are trending in your area or within your network, and people that are popular or trending among people you follow.

Twitter hopes Highlights will help bring some much-needed order to the mess that is a reverse-chronological feed of tweets that Twitter’s 300 million active users post on an almost daily basis. 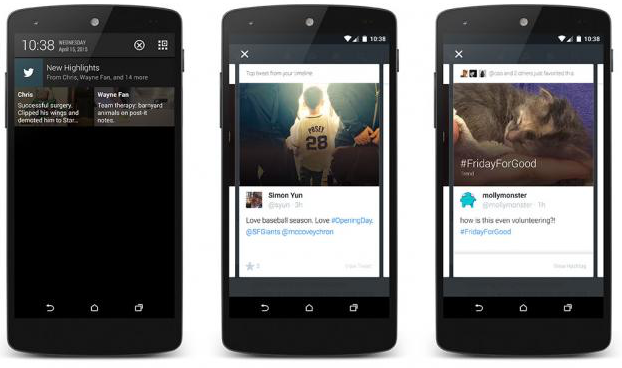 The digest is pushed once in the morning and once in the evening. Tapping the notification brings up the Highlights digest, not the full Twitter feed, arranged in order of supposed importance, not by time stamp.

“The things you care about, the places, the causes, the brands, the sports teams — we’re trying to do a better job of bringing that to you, rather than making you go find it,” says Kevin Weil, Twitter’s senior vice president for product.

The feature is accessible within the Settings menu in Twitter’s Android app, and it’s available only in English for now. Highlights are not available in the iOS app for the time being though Twitter promised to consider other platforms as well.

For what it’s worth, Bloomberg quoted Twitter as saying it has no timetable for an iOS version.

Introducing Highlights. Get the best of Twitter every day, sent to your Android device: https://t.co/9ZUWgX9lcC pic.twitter.com/sYuu7YUO4D

The micro-blogging startup recently introduced a new messaging opt-in allowing you to receive direct messages from anyone, not just from people who have followed you back.

Recent refreshes have enabled a richer Trends experience as a replacement for the Discovery and Activity tabs (now removed from Twitter’s mobile apps), brought out support for the iPhone’s slow motion videos and revamped the Quote Tweet feature.