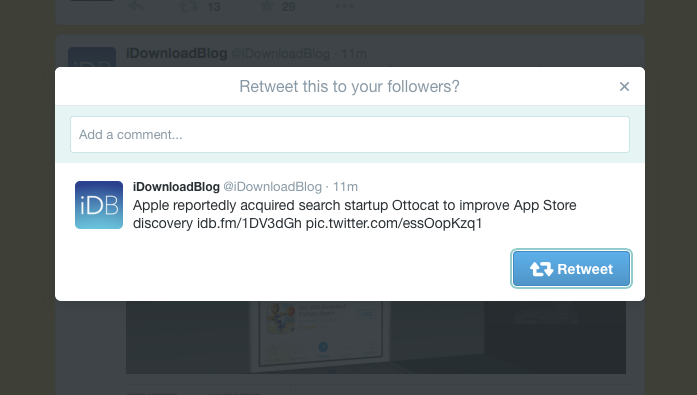 Twitter on Monday announced that it would be rolling out a revamped Retweet feature to all of its platforms. The new feature allows users to easily add comments to Retweets, and properly embeds them instead of inserting them between quotation marks. It also lets you quickly undo a Retweet, should you change your mind.

The new Retweet is being rolled out to iPhone apps and on the web, and will later make its way to Android. For those wanting to check it out on the web, simply hover over the Retweet icon, and a pop-up box (like the one above) will appear, giving you the option to either perform a standard Retweet or add a comment.

Twitter has been rather busy as of late, introducing full-width Timeline images and testing autoplaying video ads. It also recently launched streaming video app Periscope, and is readying a new Foursquare tagging feature. To keep up with all of our Twitter coverage, click here. To download the native Twitter app, click here.