The vast majority of Apple Watch apps that have been appearing on the App Store ahead of the wearable’s Friday launch are for the most part relegated to Glances and notifications, and that’s just fine.

As someone who loves music but sucks at DJ-ing, Algoriddim’s djay apps for the iPhone, iPad and Mac have for years excited and delighted me with a powerful selection of easy-to-use mixing tools that’ve turned me into the star of parties I threw at my home.

You could imagine I was watching with great intent how Algoriddim, which hails from Germany, would handle their Watch app. Well, djay for Apple Watch is now here and although I haven’t had a chance to try it out on the actual device just yet, Algoriddim was kind enough to treat me to a private demo of the app ahead of its official launch.

Suffice to say that I was smitten by what I saw. The app acts as a full-on remote controller for djay running on your iPhone, untangling you from the mixing booth while putting such headline features as Automix with Spotify and EchoNest integration.

With the Watch app, you can easily cue up and mix your favorite songs, all while controlling audio effects and loops for each deck individually, on your wrist.

What more could an aspiring DJ ask for?

As mentioned above, the Watch app has some interesting use cases for DJ-ing on the go through a handy controller on your wrist. Just to clear up any confusion right from the start: rather than mix tracks directly on the device, the Watch app sends commands with very low latency wirelessly to an iPhone in your pocket, which then renders mixes on the fly.

Just connect your iPhone or iPad to a wireless speaker or hook it up to an external amplifier so others can enjoy your pro mixes at a party.

There’s something inherently fun in being able to run mixes from your wrist. From a philosophical perspective, a great DJ plays the right song at the right time. Djay for Apple Watch was designed around that notion. 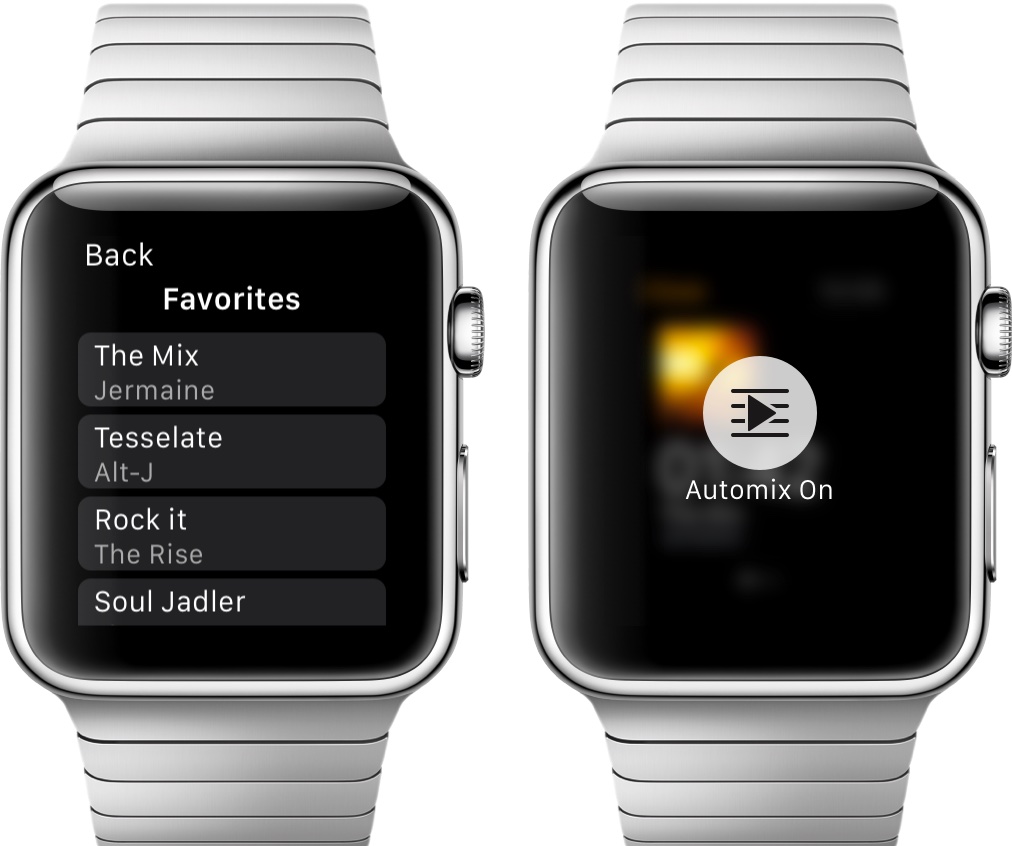 Launched from the Home screen on your Watch, the app presents you with two decks, the basic syncing controls, the crossfade controller and that’s about it. Behind it (running on your iPhone) is some pretty intense technology that Algoriddim has perfect over the years.

Thanks to lightweight controls, you can easily mix and match songs in your iPhone’s iTunes library. And because djay for iPhone integrates with Spotify Premium and uses EchoNest’s song-matching engine, you don’t need to be a DJ to mix songs that go great together.

Mixing music is as easy as accessing the Automix feature, available upon force-touching the screen on the Mixer screen. This will automagically mix your iTunes playlists with beat-matched, DJ-style transitions. If you’d rather manually transition once song into the other, use the handy Crossfade control.

Djay’s real-time audio effects are accessible in the Watch app, as are other oft-used deck controls such as track seeking, looping, play and pause and more. You also can access a handy information screen providing details on the currently playing songs, like the title, artist, album cover, remaining time, BPM and key. 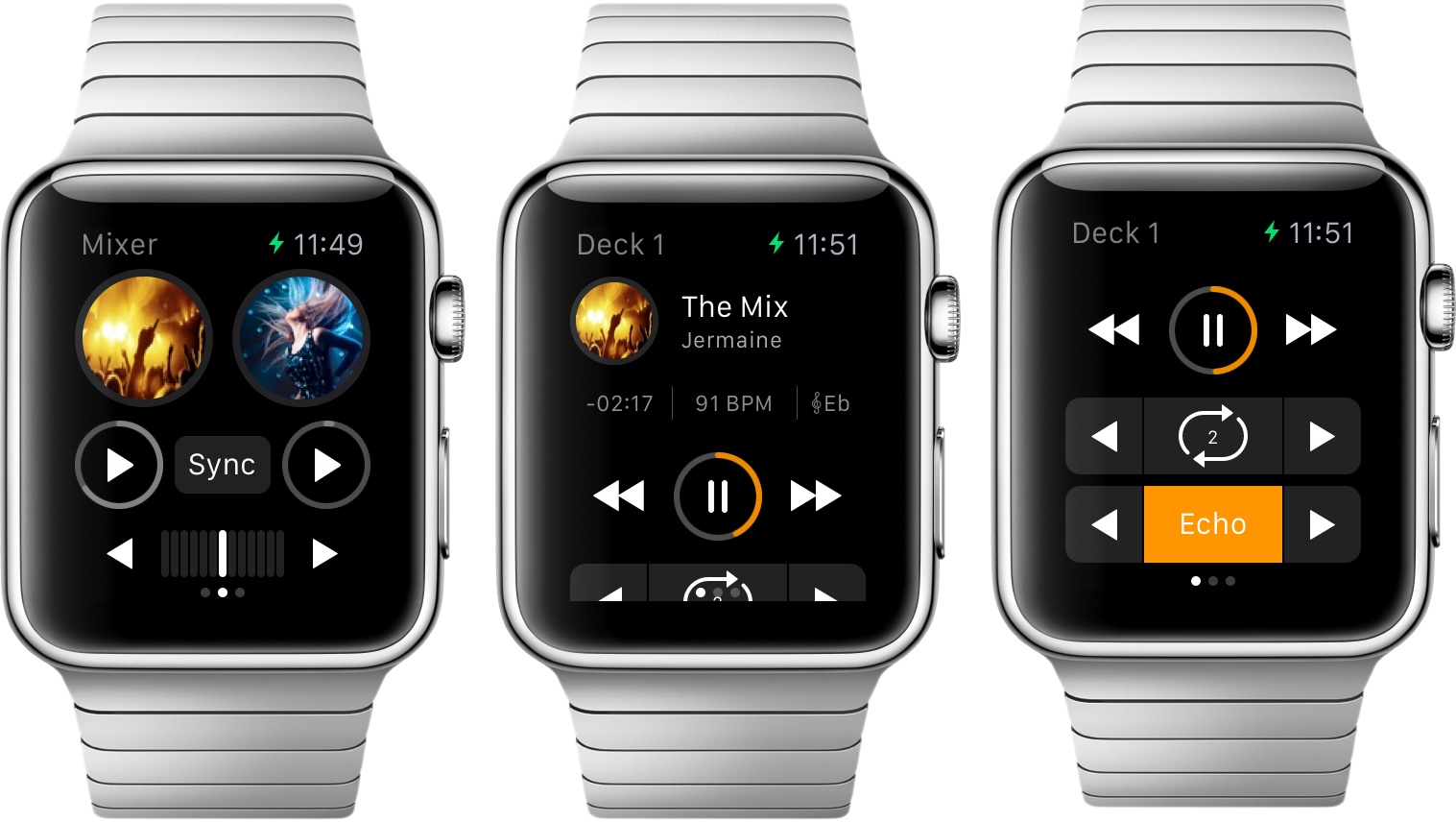 ”Back in 2006, I was in college and — along with a good friend of mine who already had ten years of experience in DJ-ing — was disappointed by the apparent lack of quality DJ apps,” Algoriddim’s co-founder and CEO Karim Morsy told me over a Skype chat.

“There was literally no app for mixing in the home without investing in expensive hardware,” he said. Both Karim and his friend were total music enthusiast and had tremendous admiration for DJs and the DJ-ing scene in particular.

Djay for Mac was born out of their frustration that professional equipment for Dj-ing was not only very expensive, but bulky and complicated as well. “First we took analog equipment and thought how to translate that on Mac,” he explains.

Conceived as a software that would be accessible to any consumer and seamlessly integrate with iTunes, word of the app spread fast among Apple enthusiasts, music lovers and DJs. Apple itself fell in love with the software and wanted to have it in stores so they approached Algoriddim.

Djay for Mac started selling via Apple Retail the following year. It admittedly helped boost djay’s sales, but not everyone had a Mac and there was no such thing as an app store back then. Then came the iPad and the whole concept of selling boxed software crashed and gave way to digital downloads.

”We knew form the onset that the iPad was the perfect platform for making DJ-ing accessible to any consumer,” Karim said. “We started asking ourselves, how do we redesign that to make sense on the touch screen”.

Djay for iPad became an overnight success: it beat Angry Birds for a couple of hours when it launched, won an Apple Design Award while Steve Jobs himself highlighted it on stage at one of Apple’s media events. In terms of numbers, It’s been dowloaded fifteen million times trough the App Store thus far.

And when Apple announced the Watch and released the SDK and tools for third-party development, they immediately went back to the drawing board to reimagine the djay experience on the Watch’s tiny screen.

As mentioned before, djay 2 for iPhone and djay 2 for iPad have gone free for a week in the App Store as part of the Watch app launch. Both editions require iOS 7.0 or later and offer over thirty additional audio effects via the In-App Purchase mechanism.

For added measure, read Lory’s review of djay 2 for iPhone.