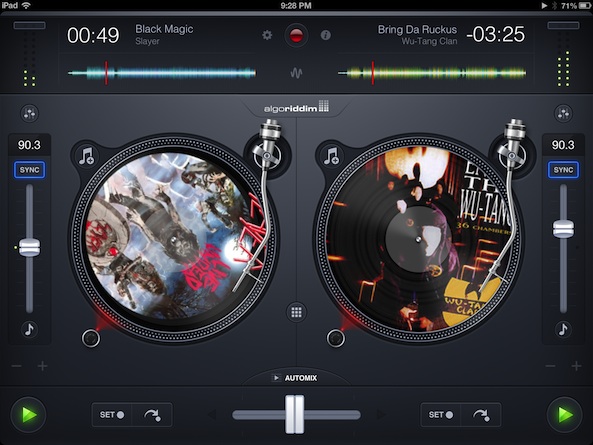 App maker algoriddim recently launched a sequel to the popular music playing app djay with the new and improved djay 2. If you are a fan of their initial record spinner, you won’t be disappointed by the follow-up.

Djay 2 for iPhone or iPad is a music player that incorporates many of the functions that deejays use when spinning vinyl. You can mix music, sync beats, and bring the party to life without having to lug around a crate of records…

While it seems like the whole app-making world is moving toward iOS 7 design, djay goes the exact opposite by featuring a hyper-realistic music playing app. The company has even gone so far as to add groves to the record, something that was not available in djay 1, so you can see when the song starts and ends.

You can now switch from dual deck to single deck mode by flipping your device from landscape to portrait mode. This makes it possible for you to see the controls better on the iPhone’s screen.

In addition to the faux dual deck turntable, users can see the music in a waveform view (another new feature). This view uses multiple color waveforms that scroll upward side by side. You perform all of the same actions as the turntable format, just with a different look.

The djay 2 app also now features a sampler section. When you open the sampler, you will see eight tap pads with different colors. You can switch between the included sampler effects, or create your own.

In the turntable view, the currently playing song will also have a mini waveform above it, so you can see where you are at in the song and have more control over what you want to do with it.

When you are ready to import music, djay 2 now features a full screen library to make it easier for you to see all of your songs, listed by BPM, title, artist, and length. There is even a “club mode” so you can keep the app dark while in a nightlife setting.

The djay2 app now analyzes your music when you add it in so that BPM, waveform, song length, and beat grids can all be calculated before a song shows up on deck. 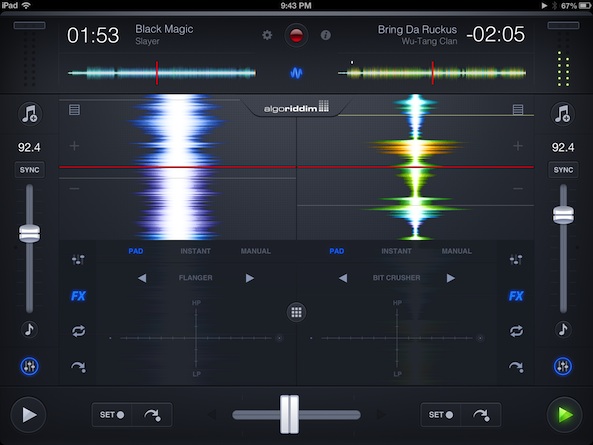 I am not a professional deejay. I am however a musician and a collector of vinyl records. I love music. I enjoy being the impromptu music player when I am at parties or hanging out with friends. I may not have the credentials to say whether this is a professional quality deejay app, but I think I know my way around a turntable enough to speak to its quality and capabilities.

Adding songs to a queue is very easy with the new full screen mode. You can preview songs, find out more information about them by touching and holding a title. You can drag and drop songs into the queue and they will automatically be analyzed and ready for play. You can even rearrange your playlist before you get started.

When you add a song, a virtual record will appear on the turntable. The faux grooves that appear on the vinyl make it easy for you to see where there are breakdowns or quieter parts of a song.

The mini waveform that appears above the turntable displays the music in a color-coded way so that you can see differences within the song. For example, the chorus will be similar colors and the verses will be different.

If you are not a fan of the hyper-realistic turntable look, switch over to waveform view to see the music in a different way. The waveform features a beat grid so you can see when the rhythm hits. The beat grid allows you to set the downbeat wherever you want.

In waveform, you can now tap splice, which lets you pick a section of the song with four measures and you can tap those measures to punch it into the song. The slip feature lets you scratch and spin the song like you would on a vinyl record. Slip may only be available on the iPad, which is how I tested djay 2.

Of course, all of the original features are still safely intact. You can set and edit loops and add loop rolls. However, now you can add loop rolls and filters using an XY grid. Effects are still available and can be triggered on the XY grid, like before.

The new sampler section features 12 pads, each with a different sound. There are three sampler packs that are preset for your use. The Essentials pack, which includes a basic drum kit and some simple effects, the Sound Effect pack, which features a variety of spacey sounding samples, and the Dubstep pack, which has a dubstep drum kit and some crazy dubstep sounds.

Of course, there are still a lot more features that are included in djay 2. It takes a while to discover everything there is to know, but none of it is too hard to learn. 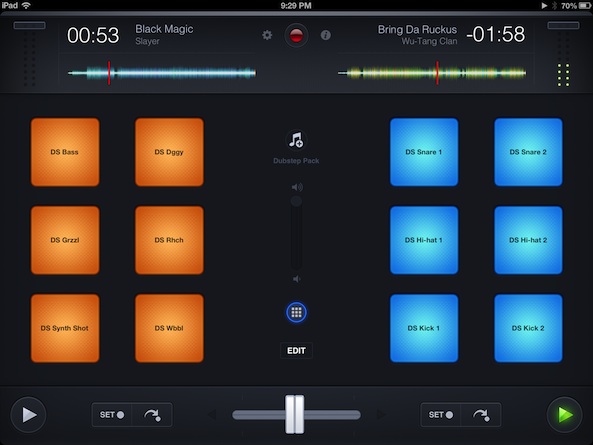 Like the original djay app, this is easy to use, even for someone who has never touched a record player. In fact, the Automix Queue feature lets you  just start playing music. You don’t have to do a thing.

I love the new waveform view. This turns a fun little music player into a useful program for mixing, syncing, and playing songs.

This app replaces djay. That means, if you have already purchased the original app, you will still have to buy djay 2 in order to access all of the updates. Djay isn’t even available in the App Store anymore. This will definitely bother some people who feel that the new app should have been an update to the original.

Right now, djay 2 for the iPad is available for half off at $4.99 and the iPhone version is on sale for $0.99 (the sale may be over by the time you read this). At that price, both apps are a great deal. Whether you are a professional or amateur, you are getting a great value for a feature-rich music player. At full price, the iPhone app is still very reasonable, while the iPad version becomes a bit high priced for casual music listeners. Fans of digital deejay apps will still find it worth the price.

If you are able to get these apps before the sale ends, I’d suggest that anyone with an interest in playing deejay, even at a small get together, should check them out. After they go to full price, I think the iPhone version is still worth the price, but only diehard deejays should spend the ten bucks on the iPad version.

Now that djay 2 features a waveform, I’d say it is on par with Traktor DJ. Touch DJ Evolution is another waveform app that, doesn’t have as many features, but is also not as expensive.