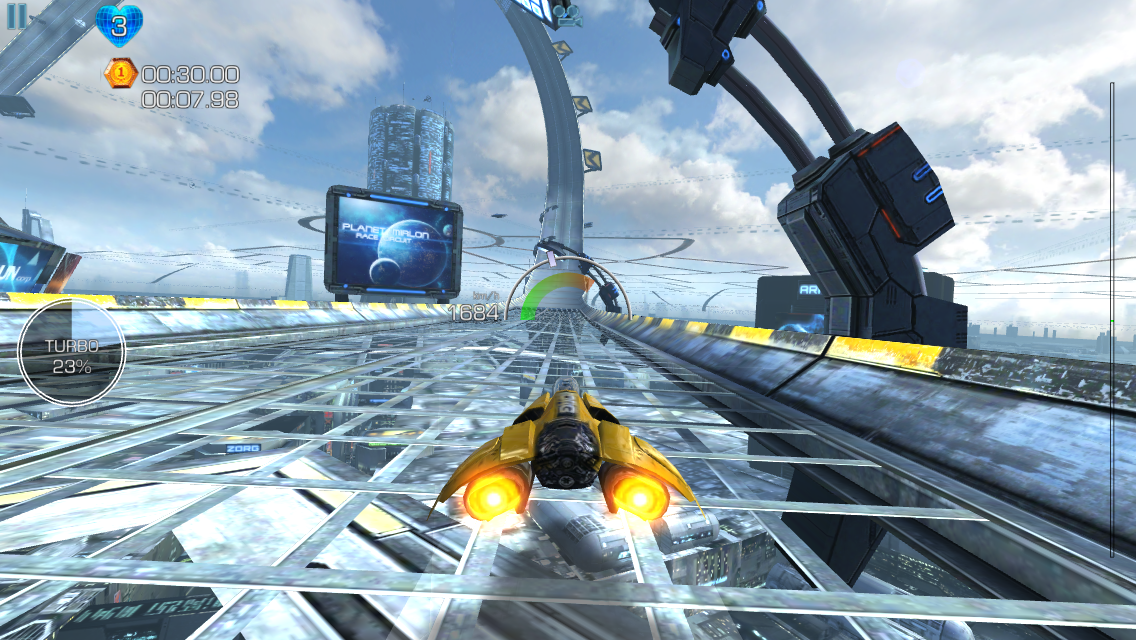 I’ve mentioned before that there are just too many racing games on the market. It gets to the point where, unless a game is doing something different, it starts to feel like a new skin on an old title.

AG Drive does something different. Instead of putting the pedal to the metal on hyper realistic pavement, players get behind the wheel of anti-gravity ships and blast off at incredible speeds across the skyways of the universe. We’ve got a full game review of AG Drive for you today.

In the 23rd century, humans figured out anti-gravity drive (AG Drive) technology for the purpose of interstellar travel. It soon became a popular form of racing around the universe because of the astonishing speed that ships could maintain.

You are a racer in the AG Drive motorsport. Your goal is to be faster than every other driver in the whole universe. Not a big deal, right?

The game is heavily focused on futuristic worlds, detailed information about the environment, and music. You can even buy the game’s dub step heavy soundtrack from the fictional, but real, record company “AriTunes Records.”

Using on-screen acceleration and tilt controls (you can switch to virtual buttons, but they are not very good), players compete in quick or career races to earn the top spot and make enough money to upgrade their ship’s gear. Upgrading your gear is truly the way to go with this game. 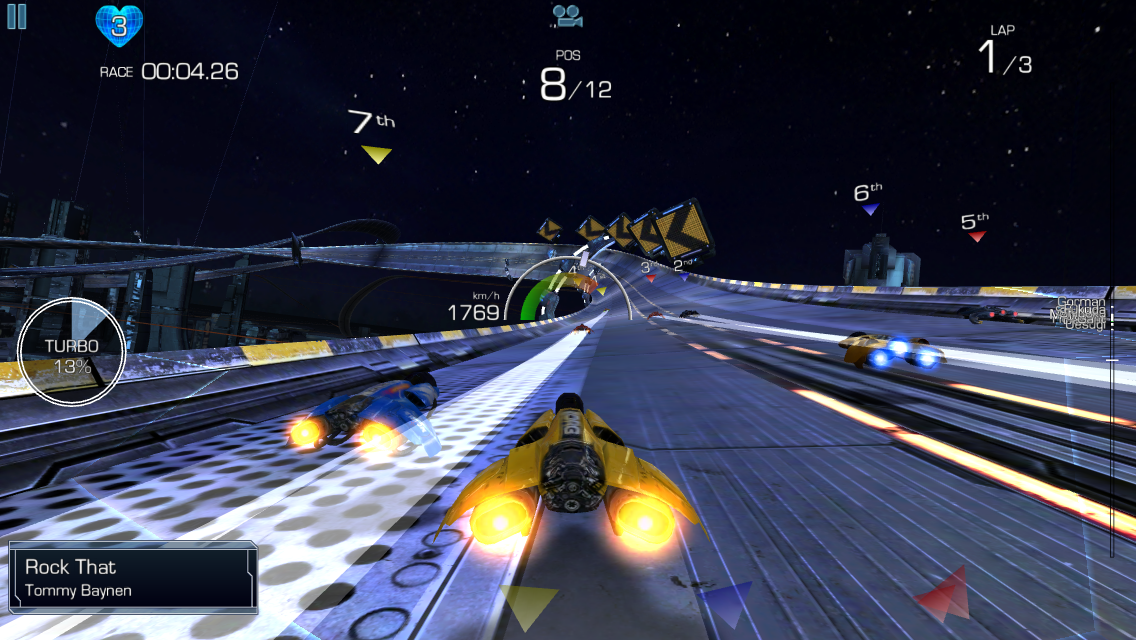 I first started playing the career mode and nearly decided not to review the game because it was just stupid hard. The only way to qualify is to come in at least third place. I came in dead last every single race. I wanted to give up.

I hopped over to the quick races, which are only about 30 seconds long. These races include time challenges, speed records, and 30-second single races against two other opponents.

It was these mini races where I earned money, event points, and fame. These three elements are crucial to making it in the career races. After earning enough credits to make my little racer faster and have better handling, I went back to try a career race.

I came in fifth place my first time, instead of dead last. Much improved.

The whole point of the game is to win. There are no weapons to shoot at other racers. You don’t earn points for performing stunts. The goal is to be the best and the only way to do that is to practice, upgrade, and practice some more. 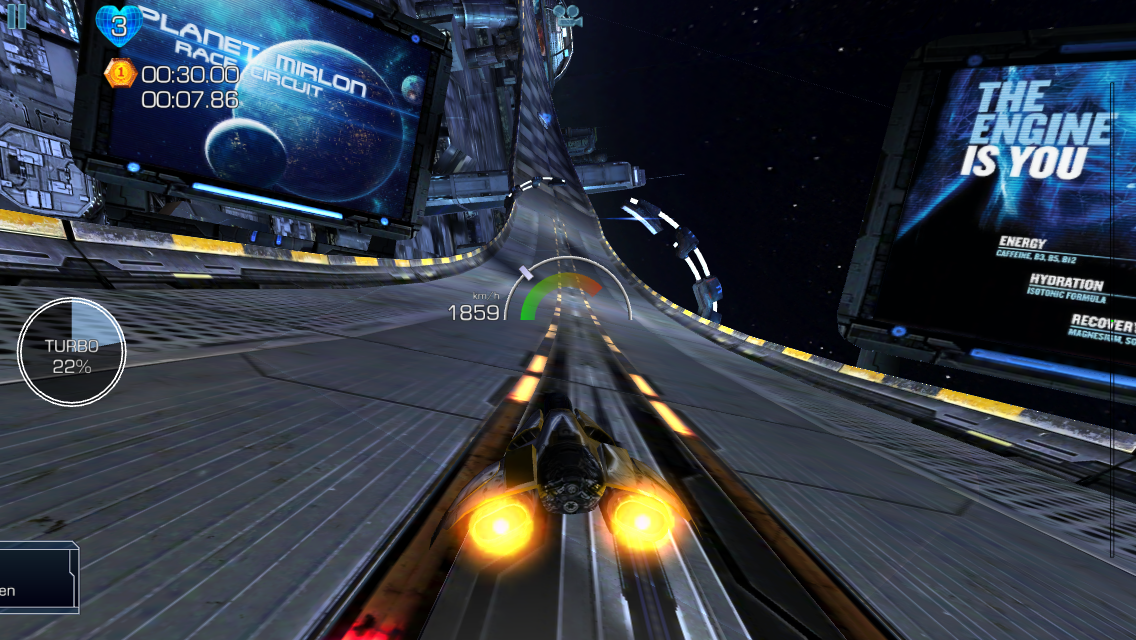 My favorite part of this game was actually the database. There are 15 categories in the database that cover such topics as the history of AG Drive motorsport, the Earth’s status, major corporations that sponsor the races, other aliens that compete, and more. If you read everything, it makes the racing world much more interesting, especially when you see billboard ads for corporations you’ve read about.

I wish I would have known that I needed to start on the quick races. Had I not forced myself to keep trying, I would have written this game off as too difficult for most gamers. I’m positive there are others out there that had a similar experience.

It would behoove the developers to have the AI helper, Gem, tell players that the best way to get ready for career mode is to start off in quick races first to earn credits, fame, and event points.

AG Drive costs $3.99 and there are no in-app purchases. Every upgrade you make, every color change you want, every new ship you buy comes from credits you earn in the game. The replay value is through the roof because you’ll want to keep racing to get more credits or reach first place.

I ended up enjoying this game, even though it seemed way too difficult at first. It is not for everyone. The game is fast-paced, the controls are sensitive at first (as you upgrade, it gets better), and there isn’t much of a guide past the first tutorial. However, racing game fans will enjoy this. It is fun and exciting. Once you get the hang of the 30-second quick races, the whole thing becomes increasingly interesting. It is available on the iPhone, iPad and iPod touch. Download it in the App Store today.

This game is a lot like Flashout 2. It has also been compared to the Wipeout series of PlayStation games and F-Zero by Nintendo.