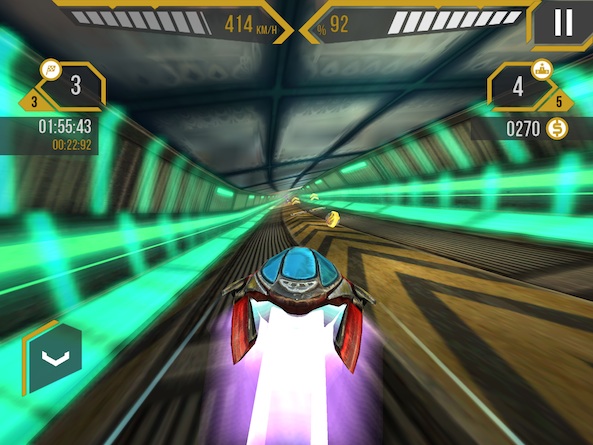 Racing games all have pretty much the same game mechanic. Drive fast, beat your opponent, and sometimes upgrade your car. No matter how many different versions of the game I play, I love every one of them. Racing is fun. Especially when you can blow your opponent to smithereens.

Flashout 2 is a racing game set in an utopian future where cars can fly, money litters the streets, and it is legal, in some cases required, for you to destroy your opponent…

The streets are lit with neon to add a futuristic element. It calls to mind the cityscapes in Blade Runner, only brighter and happier.

The vehicles remind me of a cross between Pod Racers and flying cars from The Fifth Element. Basically, the theme is very futuristic. Not shiny and neat, but not apocalyptic either.

Players control their racer by tilting their iPhone or iPad like a steering wheel. There is an on-screen break button on the left side of the screen and the weapons button is on the right. There are times when you will pick up bonus items on your drive. Those will appear above or below your break and attack buttons.

Games like these almost always have a fairly annoying soundtrack. This game is not much different. However, the background music isn’t invasive the way some can be. I never turned off the audio while playing, which is something I almost always do with racing games. 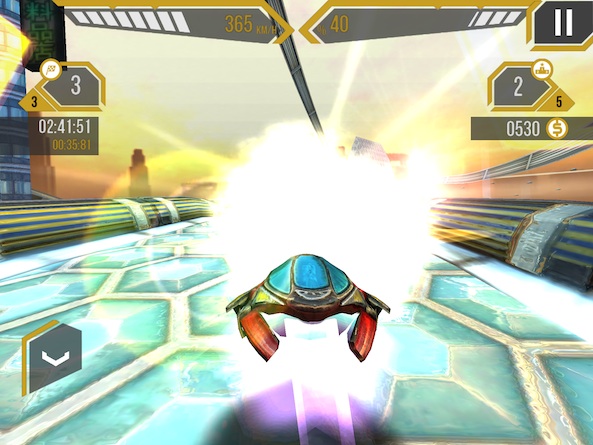 The best way to get started is to run through the tutorial. Here, you will learn how to control the vehicle and what the different symbols mean. For example, there is a track switcher that will unlock an alternative route. There are also bonus items that will grant you additional weapons and shielding. You will also be given a few missions that are reflective of what takes place in Campaign mode.

Then, hit the road and win the championship. Start with the Career and select Ignite Trophy. This opens the first campaign of the game. You will participate in four races against five computer-generated players.

Two races will be straightforward. The goal is to win no matter what. You may play straight, but be aware that your computer opponents will not. They will shoot you down as often as possible to ensure their lead.

One race will be a Destruction Race, which means that the person who destroys his opponent the most wins the round, no matter who gets to the finish line first.

The last race is the “Versus” race, which pits you against an opponent to complete the league and advance to the next set of races.

You can equip your car with the necessary enhancements, like mines, rockets, and nitro, but it will cost you coins.

You start the game with 5,000 coins. You will earn more as you race, especially if you win. Coins can be used on per-race enhancements or to purchase and upgrade vehicles.

From my experience, the way to win a race is to buy the best vehicle you can afford and then upgrade everything you possibly can. Don’t waste your money on enhancements that can only be used in a single race. They don’t really benefit you that much and keep you from saving up for the big purchases, which are better vehicles.

In order to proceed to the next set of races, you must finish in at least third place in each of the campaigns. Otherwise, you will fail the league and must repeat the levels.

You can also play against others in online multiplayer mode. You can either compete over local wi-fi or find someone to play against using Game Center. I tried out Game Center mode, but never found opponents to race against. That happens with newer games, though. 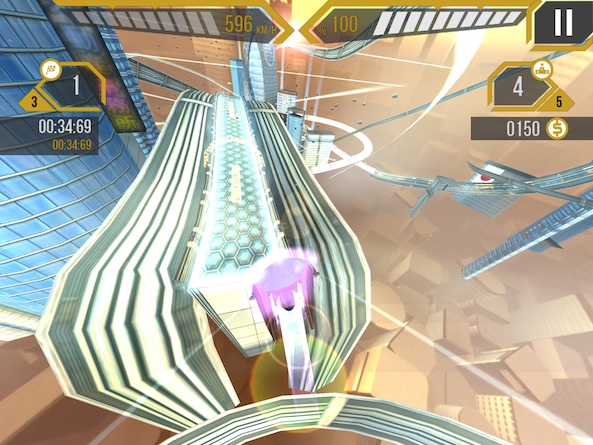 This game looks great and the races are a lot of fun. You collect lots of coins on the tracks, plus, you earn big bucks when you win a race. It is fairly easy and not too expensive to max out the upgrades on your vehicle.

I love the look of the vehicles and tracks. Everything looks like it belongs in a future that will never exist.

I experienced a number of annoying glitches, including one that would freeze my game between levels. I’d have to start the league all over again, even if I’d won first place in a race. This happened after the recent update.

Sometimes, I’d collect a bonus item, like Nitro, and it wouldn’t show up in my inventory.

There is no way to change controls from tilt to virtual controllers. I’d like to see an option to choose one or the other. I am not a fan of tilt controls.

Flashout 2 costs $0.99. That is a very good price for a racing game like this. However, there are a lot of ways to spend the in-game coins, which you can buy with an in-app purchase. I’ve said it before. I don’t like games that cost money to download and offer in-app purchases. However, from my experience, I never felt like there was anything in the game I wanted that I couldn’t earn the coins through gameplay to get.

Racing games are a dime-a-dozen. Even for games that offer cool features and neat graphics, you are still just racing. If that appeals to you, like it does to me, then you’ll get a kick out of this game. It is available on the iPad, iPhone, and iPod touch. Download it in the App Store today.

What do you think of Flashout 2? Is it up your alley?