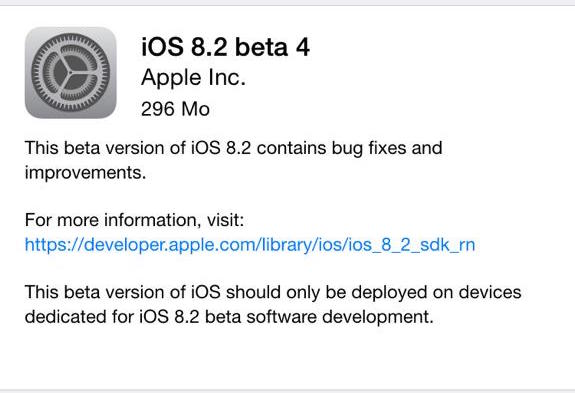 Apple has this morning seeded the fourth iOS 8.2 beta to developers. The release comes three weeks after the previous iOS 8.2 beta, and follows this morning’s discovery that Apple has begun testing early iOS 9 prototype builds.

The new 8.2 beta can be downloaded either over-the-air, or via Apple’s developer portal, by all registered iOS developers. It’s still unknown what new features the firmware will bring, but we do know it’ll enable support for WatchKit.

It’s also unclear when iOS 8.2 will be released to the public. We’re expecting a less significant iOS 8.1.3 in the near future, and since 8.2 enables WatchKit, it’s likely we’ll see it around the Apple Watch launch—which is slated for March.

At any rate, we’re installing the beta now and will pass along any notable changes. If you see something we’ve missed, feel free to email us at tips@idownloadblog.com or leave a note in the comments section below regarding the change.