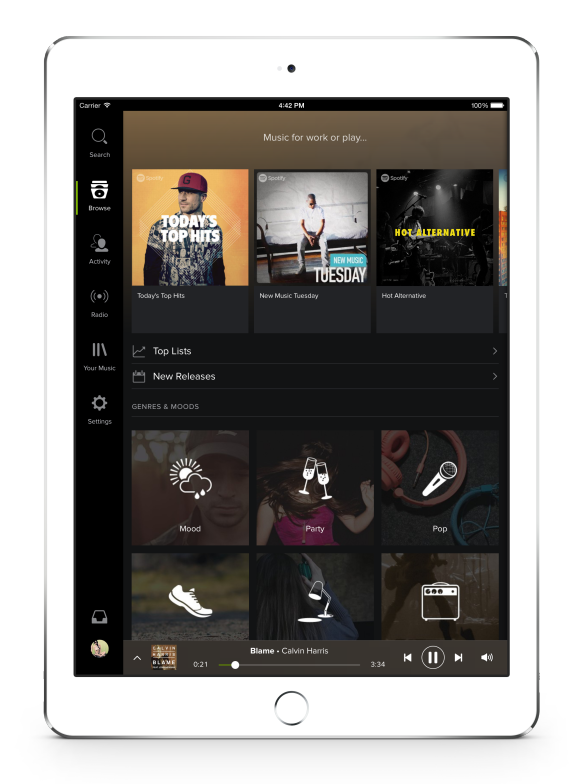 Spotify, the leading music-streaming service hailing from Sweden, gave its iPad app on Thursday a little love. For starters, the team has crafted Skype for iPad’s user interface around an all-new dark look.

As a result, Spotify at last has consistent appearance on the iPad, iPhone and Mac — down to the same dark theme, precise typography and rounded iconography.

Moreover, the Your Music feature which debuted in the iPhone edition in April 2014 is now available on the iPad, too. Representing a better way to save, organize and browse your favorite songs, Your Music is a replacement to user-generated playlists. With Your Music, you can add tracks which sync across every device, without having to create playlists or use the starring feature that lumps all starred songs into a huge list.

Download Spotify free of charge in the App Store.

As a bonus, the company back in June brought out offline support for Your Music so you can listen to the songs you like the most without an Internet connection. As a bonus,  it’s entirely possible to save whole albums to the Your Music list.

Here’s another look at the new interface.

Spotify and rival Pandora are the two leading music-streaming services in terms of downloads, analytics firm AppAnnie announced yesterday. Beats Music, which Apple purchased for $3 billion in May, is placed ninth, below iHeartRadio, SoundCloud and GarageBand.

Apple itself in a SEC filing admitted to suffering a decline in sales of digital music.

Industry data shared by The Wall Street Journal shows sales of digital music on iTunes dropping between thirteen and fourteen percent since the start of 2014.

Spotify, a 36.4-megabyte download, requires an iPhone, iPod touch or iPad with iOS 7.0 or later.