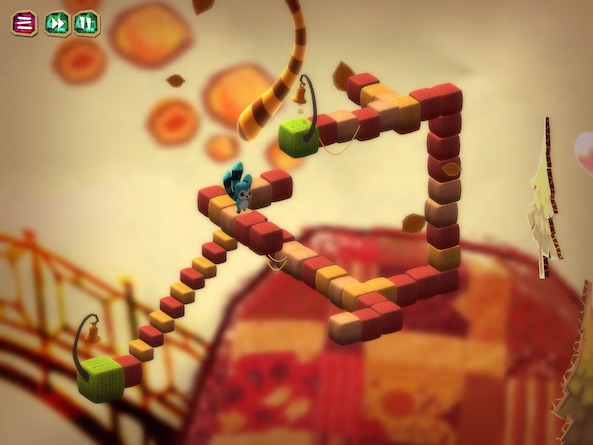 The perspective path puzzle game has certainly been a hit on iOS. For example, earlier this year, Monument Valley turned heads for its visually striking graphics and complex puzzles.

Miika could be called a simpler, cutesier perspective puzzle game in the same vein as Monument Valley. Players must rotate the screen around in order to reveal the right path to take in order to get to the end of the line. We’ve got a full game review of Miika for you today.

The game is very cute. The quality graphics display a colorful set of blocks that Miika, a three-tailed raccoon walks along. With the exception of a few accents, everything else is blurred into the background, giving the scene a look of a shallow depth of field.

Miika walks along on his own, but will turn back the moment he reaches a gap in the path. Players must hide the gap by changing the visual perspective of the path. For example, from one angle, it looks like a path is far below the other, but by moving the viewing angle, it appears as though the lower path is now at the same height as the upper angle and Miika will walk across it.

In each new group of puzzles, new elements are introduced. For example, players will have to use vertical blocks to hide gaps in paths or figure out how to line up a hole in the ground with the path below.

The game’s soundtrack fits nicely with the overall cuteness. It reminds me of a platform game, only with a completely different set of game mechanics. 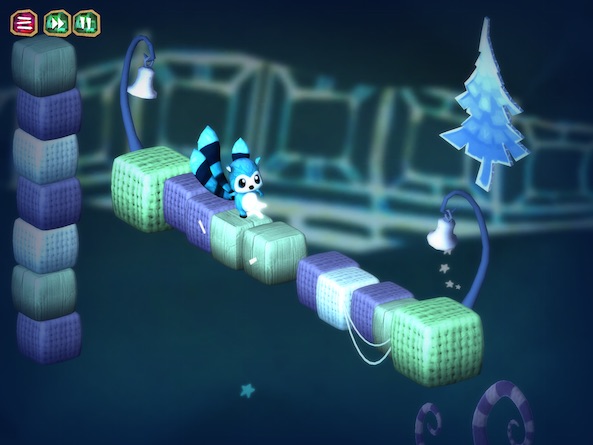 With very little instruction, players must figure out how to rotate the view so that a path is no longer blocked by a gap or hole. To do so, drag your finger around on the screen. This will move the “camera” view so that you will go from an above view to a below view, or rotate around 360 degrees. When the gap in the path appears to be gone, Miika will hopefully walk all the way across to the other side.

There are usually multiple gaps, so after Miika crosses one, you’ll need to move the camera angle again in order to connect the next set of paths. When you reach the bell at the end, you have completed the level.

As the game progresses, new challenges will arise and players must figure out how to use the available elements to reveal the right path. There is only one correct way to solve each puzzle, so one angle may look like it will give Miika a new pathway, but it may not be the correct one and you’ll have to keep rotating until you’ve found the right one.

This can be frustrating at times, because you will start to think there is something wrong with the game. Clearly, the path is there, but Miika doesn’t cross. However, keep in mind that just because it looks like the right pathway, it doesn’t mean it is. You’ll have to keep trying until Miika continues walking.

In addition to revealing the path, players are tasked with completing each puzzle in the fastest time possible. The faster you complete a level, the more stars you earn. Different levels have different time requirements for star rewards.

The game is made up of four seasons with seven levels in Autumn and Winter, six in Spring, and five in Summer for a total of 25 levels. 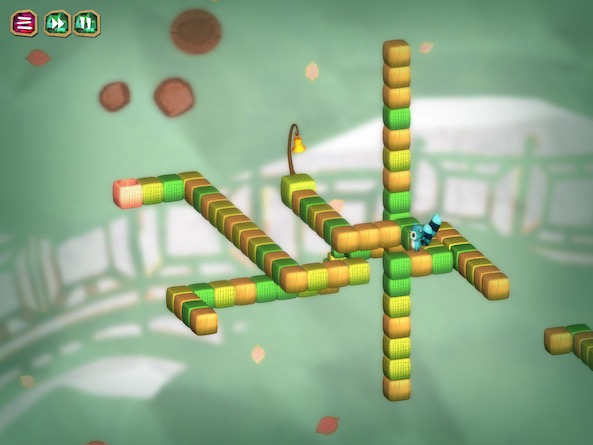 The game is very well made with smooth, high-quality graphics. The puzzles are fun and it is nice to see that the challenges increase over time. The game is also MFi compatible, making it more like a console game than a mobile game.

The game is too short. Each level can be completed within a couple of minutes. The game doesn’t really start to get hard until the Spring levels, so the first half of the game flies by. My hope is that the game’s developer is willing to add new levels as a free update in the future.

Miika costs $1.99, which is a very reasonable price for a game that is so well made. My only reservation is that it won’t take very long to complete it entirely. The good news is that the replay value is fairly high, since you earn more stars for completing the game faster.

Because the gameplay is relatively short, I hesitate in simply calling this a must-have game. It looks fantastic and the graphics are about as console-quality as it comes. However, I know that our readers might scoff at paying two dollars for a game that can be completed in one evening. I think it is worth the price, but take this into consideration when deciding whether it is right for you. It is available on the iPhone, iPad, and iPod touch. Download it in the App Store today.

I don’t want to give the wrong impression about my comparison to Monument Valley, but there are definite similarities. Lost Toys is another puzzle game with a similar 3-D rotating camera angle.

What do you think of Miika? Let us know in the comments below.