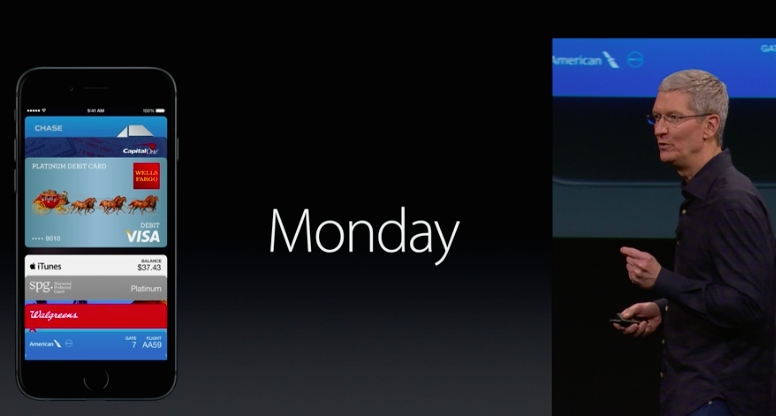 During his on-stage introduction at Apple’s iPad event today, Tim Cook announced a release date for Apple Pay. The company is set to launch the new mobile payment service on Monday, October 20th, alongside the release of the iOS 8.1 update.

Additionally, Cook said that Apple has signed on 500 new banks since announcing Apple Pay last month, and a number of new retailers. The service will work with iPhone 6, 6 Plus and Apple Watch in stores, and iPad Air 2 and iPad mini 3 online.

“Our team has worked incredibly hard to make Apple Pay private and secure, with the simplicity of a single touch of your finger,” said Eddy Cue, Apple’s senior vice president of Internet Software and Services. “The reaction to Apple Pay has been amazing. We continue to add more Apple Pay ready banks, credit card companies and merchants, and think our users will love paying with Apple Pay.”

In addition to the 262 Apple retail stores in the US, a number of leading retailers will be supporting Apple Pay at launch including: American Eagle Outfitters, Chevron and Texaco, Foot Locker, McDonald’s, Office Depot, SUBWAY, Walgreens and more.

Unveiled last month, Apple Pay will allow owners of compatible iOS devices to make quick, easy purchases both online and in stores. Using a secure enclave to manage transaction data, and Touch ID, the service is billed as on of the safest in the world.

Stay tuned to iDB over the next few days for more Apple Pay coverage.