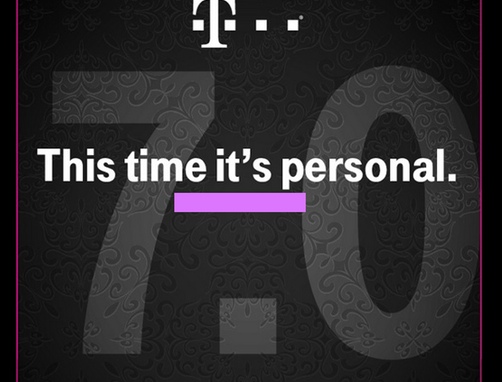 T-Mobile today sent out invitations to a media event scheduled for September 10th—notably the day after Apple’s iPhone keynote. As you can see in the image above provided by TmoNews, the invite reads “This time it’s personal,” with “7.0” printed largely in the background.

The event will be held in San Francisco, at the T-Mobile store on the corner of Market and 3rd street, and begins at 1 pm on the aforementioned date. There’s no word on what will be discussed, but T-Mobile usually uses these occasions to make major strategic announcements.

During its last event T-Mobile announced its Uncarrier 5.0 and 6.0 initiatives simultaneously: Test Drive and Music Freedom. Test Drive allows users to try out an iPhone 5s for a week on the carrier’s network, and Music Freedom offers free unlimited data for music streaming.

For its Uncarrier 7 event, T-Mobile finds itself in an interesting place. After failing to negotiate a buyout with Sprint, and turning down an offer from France’s Iliad, it’s being reported that owner Deutsche Telekom is still looking to sell off the United States’ fourth largest carrier.

We’ll of course be covering the event and all major announcements, so make sure you join us around 1pm PST on September 10th.