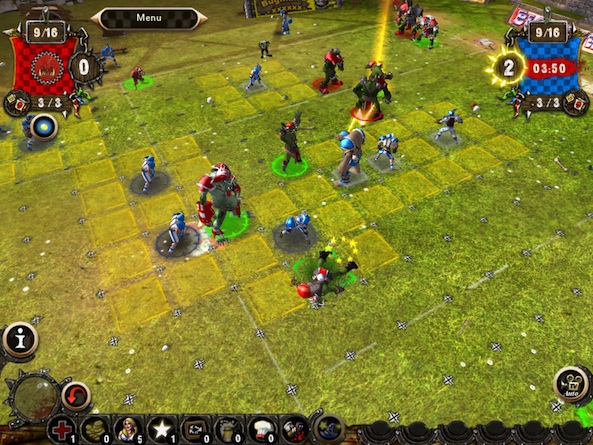 The Warhammer series dates back to the mid 1980s when the role-playing adventure game and the tabletop miniatures game won the hearts of fantasy fiction fans. The football-inspired board game based in the Warhammer Fantasy setting made its debut in 1987 and became a PC video game by the mid-1990s.

Blood Bowl for the iPad is the mobile adaptation of the original PC game. You can play as either Humans or Orcs as you compete in this season’s tournament for supremacy. Just watch out for the opposing team. Killing your opponent works better than stealing the ball does. We’ve got a game review of Blood Bowl for you today…

The game takes its design from the original PC version, almost identically. The graphics are not updated for modern technology. So don’t expect Unreal Engine quality here. Remember the game was first launched in 1995.

The game takes place on a playfield that looks, on the surface, to be a traditional American football field, but with spike-wearing Orcs and other dungeon-dwelling creatures. The field is peppered with players, referees, and even a couple of cheerleaders.

Although it looks like a traditional football field, it is anything but. This is based on a physical board game, so you’ll have to throw all of your ideas of sports out the window and think like a tabletop gamer. Your team will move a certain number of squares on the board and have very specific bonuses and weaknesses. Your job is to choose a character that will produce the highest roll result (including bonuses to stats and reroll abilities).

Tap on a player to see his features and abilities. Tap on those items to read more about them. Pinch to zoom in to get a close-up view of the action. Pinch out to get a wide shot of the entire playfield. Tap the camera to switch angles.

Although you are in charge of placing and moving your players around on the field, the results of their actions belong to the fates. The result of every action your player attempts is determined by a dice roll. That is why it is so important to use your team wisely so their stats and abilities will increase your chances of getting the roll you want. 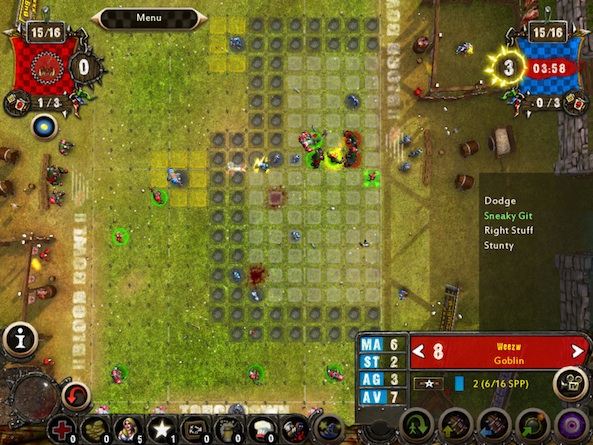 Before I start, I should note that I’ve never played Blood Bowl before, either the board game or the PC original. So, I’m probably a lot like many of our readers who would be going into the game with no clue as to what to do next. I highly recommend playing the 30-minute tutorial first. In fact, I recommend that you read the in-game rulebook and even download the living rulebook for the board game and read everything before beginning. The tutorial leaves a lot to be desired and doesn’t give enough basic information to help you understand how to play. At least, that’s how it felt to me trying to play the game with no background knowledge.

Once you get through the tutorial, I recommend playing a few Exhibition Matches in order to learn how to play and earn some in-game cash before starting a league.

At the beginning of the first half, you’ll be able to choose where to position your team, which you can read about in the rulebook. Then, let the bloody games begin. When it is your turn, you’ll be able to throw, pass, or run if you have the ball. You can also tackle, blitz, and block. Like real football, the goal is to get a touchdown. Unlike real football, your actions are decided by a dice roll. If you successfully catch a ball, you can run downfield, pass to another player, or stay put. Each action requires a dice roll. If the player holding the ball is skilled in one of those actions (run, pass, throw), then you will have the opportunity to roll a second time if you don’t succeed the first time. The same goes for attacks and blocks.

If you try to move away from one of the opposing players, he gets an attack of opportunity and can tackle you if you don’t roll a successful block (it is like a Saving Throw). So, if you are trying to grab the ball or run to protect a player, keep in mind that any opponent you cross paths with can tackle you.

You can move and use an action with every single player on the field before your turn ends. However, if you suffer a “Turnover,” you lose the rest of your turn and your opponent can play. Turnovers happen when you are tackled, drop the ball, or fail a roll.

I’ve only had the opportunity to play the tutorial and two Exhibition Matches, but I can tell that I’m starting to understand how to play better. With a few more skirmishes, I’ll be ready to move onto Campaign mode. However, I have a lot of homework to do, reading the rulebook, before I can consider playing a Multiplayer game. 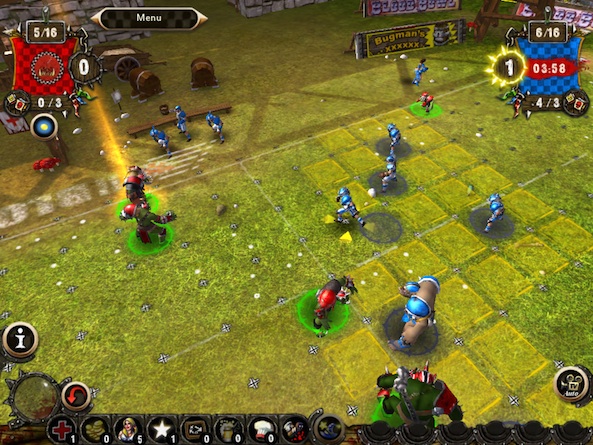 From what I’ve read, this is an exact port of the original game. So, players that are familiar with the PC version will be comfortable in this environment. This iPad adaptation is significantly less expensive than its PC counterpart because additional races are available as an in-app purchase. The Dwarf, Skaven, Wood Elf, and Chaos races cost $2.99 each, but you don’t need them in order to play the entire game. This is nice for gamers who want to start playing Blood Bowl, but aren’t willing to invest $16.99 up front.

As noted above, the tutorial does not explain much of the basics (like what the symbols on the dice mean), which means players must go outside of the gaming experience in order to understand how to play.

It seemed like the dice rolls were weighted toward the AI opponents. I regularly failed my pass or block, while the AI players regularly succeeded in practically every action. This made for a very frustrating start to my gameplay experience.

Blood Bowl costs $4.99, which is significantly cheaper than its PC counterpart. You can get it on your PC through Steam ($19.99 – $29.99, depending on the edition). So, the $2.99 addition to unlock more playable races seems completely fair. You’d still be spending less than $20 on the entire game.

Because the tutorial is not complete and new players must research outside of the game in order to successfully understand the basics, I’d recommend this for players that already have the PC version, but caution newcomers about it. That doesn’t mean you shouldn’t buy the game. I didn’t know a lick about it before playing and am already becoming more familiar with its techniques. If you are familiar with traditional role playing games, like Dungeons and Dragons, or even better, Warhammer, you will be able to figure it out eventually. You can download it on the iPad in the App Store today.

Fans of the Warhammer Fantasy setting should check out Warhammer Quest and Warhammer 40,000: Carnage. Fans of American football games should not play this without reading a detailed description of the rules.

Have you played Blood Bowl before? Will you be downloading it on the iPad?