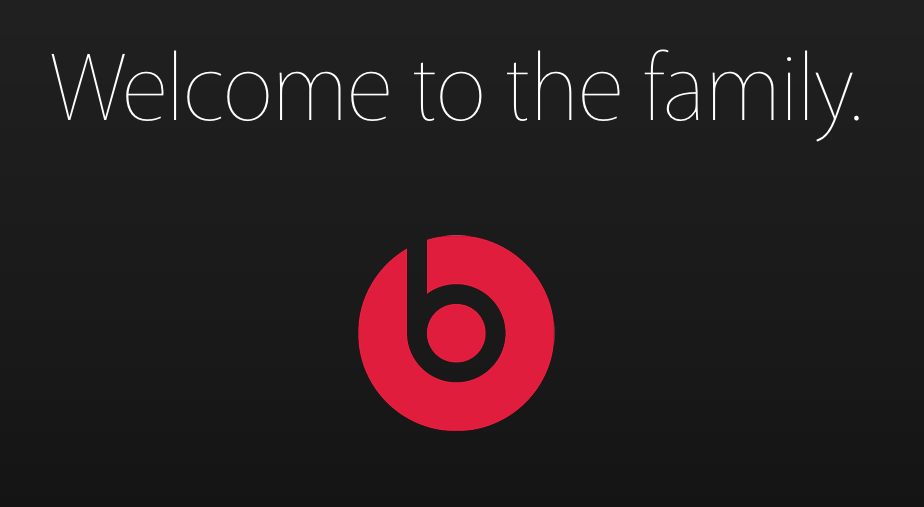 It’s been just over 2 months since Apple announced that it would be acquiring Beats Electronics for $3 billion. And although the deal wasn’t expected to be completed until September, the Cupertino company is clearly ready to officially welcome Beats to the family.

Apple this morning posted a link on the homepage of its website to a new portal called ‘Welcome Beats,’ which features a brief message about the merger. Likewise, a message has been posted on Beats’ homepage regarding the acquisition and upcoming changes…

Today we are excited to officially welcome Beats Music and Beats Electronics to the Apple family. Music has always held a special place in our hearts, and we’re thrilled to join forces with a group of people who love it as much as we do. Beats cofounders Jimmy Iovine and Dr. Dre have created beautiful products that have helped millions of people deepen their connection to music. We’re delighted to be working with the team to elevate that experience even further.
And we can’t wait to hear what’s next.

And here’s the message from Beats’ site:

There’s a new instrument in the Apple family. Musicians rely on their instruments to give structure and form to their imagination. At the dawn of digital recording, the Macintosh computer was the instrument of choice. At the beginning of portable digital music, the iPod placed the library of the world’s music in your pocket. The iPhone became not only an instrument for music but also the center of your connected life. The iPad extended this capability with a user interface and apps that allowed you to compose a symphony on the subway. Starting today, we at Beats are fortunate to add our instrument to this legacy by joining Apple. The products we build together will allow us to reimagine sound once again and to continue this great tradition of bringing imagination to life.

Beats’ website also features a link to a new page called ‘Important New Changes,’ which outlines some of the changes that are taking place as a result of the acquisition. Perhaps the most notable is that beginning today, all online orders will go through Apple.com.

Apple began the transitioning process earlier this week, moving Beats employees into new departments and beginning the integration of Beats Music into iTunes. Additionally, Bloomberg reports that Vivendi has just finalized the sale of its 14% share in Beats to Apple.

Welcome to the family—Jimmy, Dre, Luke, Ian and the entire beats team! http://t.co/qECVlXlYQZ

And 9to5Mac has an internal note from Apple’s Eddy Cue and Phil Schiller:

Today Beats officially joins the Apple family! On behalf of all Apple employees around the world, we would like to extend them our warmest welcome. Music is in our DNA. In Beats, Apple has found a team of creative and talented people who are as passionate about music as we are. Jimmy Iovine, Dr Dre, and the team that has built Beats have created music products that customers love. And what we will do together is going to be even greater than what we could have done on our own. This is going to be a lot of fun!

Apple’s acquisition is now approved in the U.S. as well, Apple confirmed to TechCrunch, which explains why both companies have now officially publicized their merging on consumer-facing channels.