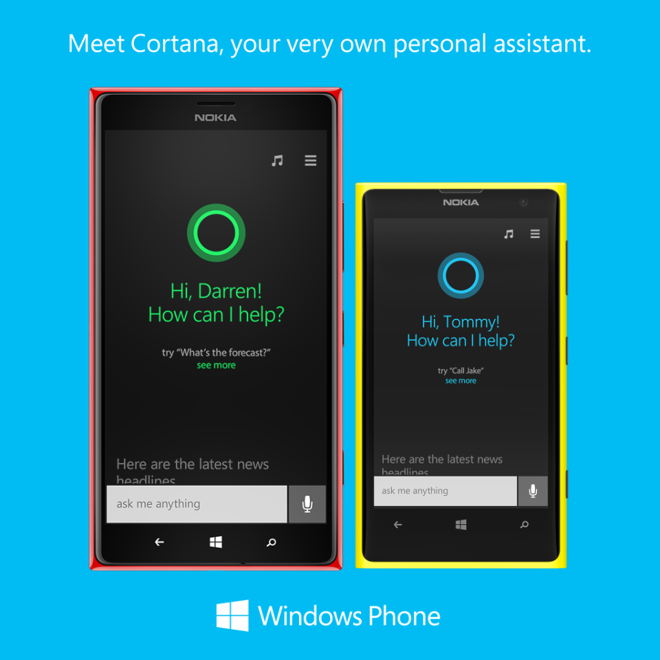 Microsoft on Monday shared a new television commercial which the company first showed off at its annual conference back in April to rally up developers who were concerned that the software giant was losing its mojo.

The 30-second video depicts a showdown between Cortana, Microsoft’s own digital personal assistant baked into Windows Phone 8.1, and Apple’s Siri.

Say hello to Cortana, your new personal assistant. Cortana will remind you to leave early to beat traffic and help you get to your destination on time, will remind you that you need milk when passing the grocery store, and will remind you to say happy birthday when your mom calls. Available now on the new Nokia Lumia 635 and on other Lumia phones.

The Windows maker is allegedly considering porting Cortana to iOS and Android.

According to Microsoft executives, Cortana has been conceived as a “pervasive” feature so not only is the company mulling bringing her over to iOS and Android, but to the desktop and into vehicles and other venues, too.

The Redmond giant is no stranger to anti-Apple advertising.

A series of advertisements for its Surface tablets routinely take aim at the iPad’s sub-par specs, lack of true multitasking and other features Microsoft’s marketing department decides to paint in negative light.

The company even attempted to lure would-be switchers by giving $650 in trade in value to customers willing to exchange their MacBook Air for a Surface Pro 3 tablet.

Is the Cortana ad funny, do you think?