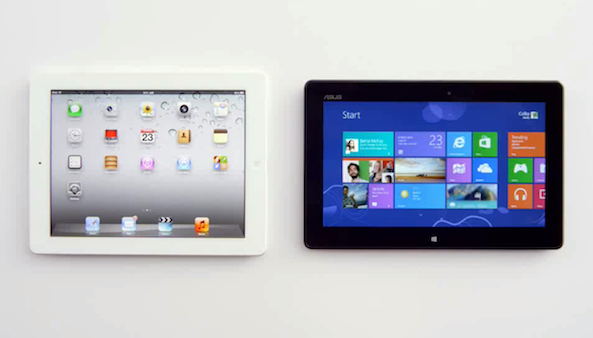 It’s not unusual to see Microsoft and Apple products pitted against each other in a TV ad. Back in the early 2000s, Apple had success with its ‘I’m a Mac’ spots. And just recently, MS took on both Apple and Samsung in its ‘Don’t Fight’ commercial.

But this new Windows 8 tablet ad takes the rivalry thing to a whole new level. Using the voice of Siri, Microsoft highlights a number of things that the iPad can’t do, that a tablet running its latest OS can. As always, we have the video for you after the fold…

The ad, which is entitled ‘Less Talking, More Doing,’ shows an iPad next to an ASUS VivoTab Smart tablet running Windows 8. And as a hand demonstrates some of the different things the 8 slate can do, a Siri-like voiceover admits that the iPad can’t replicate them.

Some of the VivoTab’s features highlighted in the commercial are the ability to run multiple apps side by side, and run MS Office apps. In response, the Siri voice says “I’m sorry, I can only do one thing at a time,” and “I guess PowerPoint isn’t one of those things.”

As John Gruber points out, it’s funny how the tables have turned since the ‘I’m a Mac’ days. Actually their messages are still the same—Apple products are too simple, Microsoft products are overly complicated. But the difference is who’s chasing who in marketshare.

According to the latest numbers from research firm IDC, Windows RT and 8 tablets combined for less than 4% of tablet OS marketshare in Q1 of this year. Apple’s iOS, on the other hand, accounted for nearly 40%.

What do you think of Microsoft’s new TV ad?