Priced at $9.99 per month, the iOS-compatible service gives reading aficionados unlimited access to more than 600,000 books, including best-selling titles like the Harry Potter series, The Hobbit and The Lord of the Rings trilogy, the Hunger Games trilogy and Diary of a Wimpy Kid books.

The subscription plan is available on Kindle devices, as well as free Kindle reading apps for iOS, Android and more…

According to Amazon, the plan also includes more than 2,000 audiobooks, including titles like The Handmaid’s Tale, Life of Pi and Capital in the Twenty-First Century.

Kindle Unlimited includes other popular features such as Whispersync, X-ray and Goodreads integration, Kindle-exclusive books, thousands of “short reads” (titles that are 100 pages or less), to name a few.

A free 30-day trial is available, too. 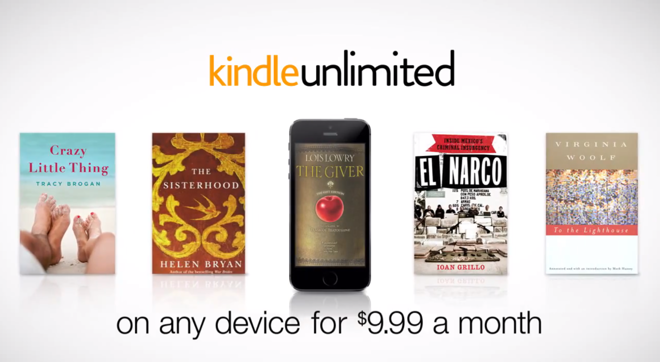 So what’s the difference between Kindle Unlimited and Kindle Owner’s Lending Library available to Amazon’s $99 per year Prime subscribers?

First, though both offer largely the same e-book library, Kindle Unlimited brings those books to devices like the iPad.

Second, Kindle Unlimited does not limit you in terms of borrowing periods or number of titles read per month.

And third, Kindle Unlimited is a standalone service which not only offers unlimited reading, but also audiobooks.

The service is currently available in the United States only. If you’re interested, check out Kindle Unlimited at the Amazon website.

Will you be subscribing to Kindle Unlimited?

I think the service offers fair value, especially for those who plan on reading more than one e-book per month.

With e-books typically selling for about ten dollars a pop, this is similar to the argument that Spotify offers unlimited access to streaming music for the price of a single album download on iTunes or less.