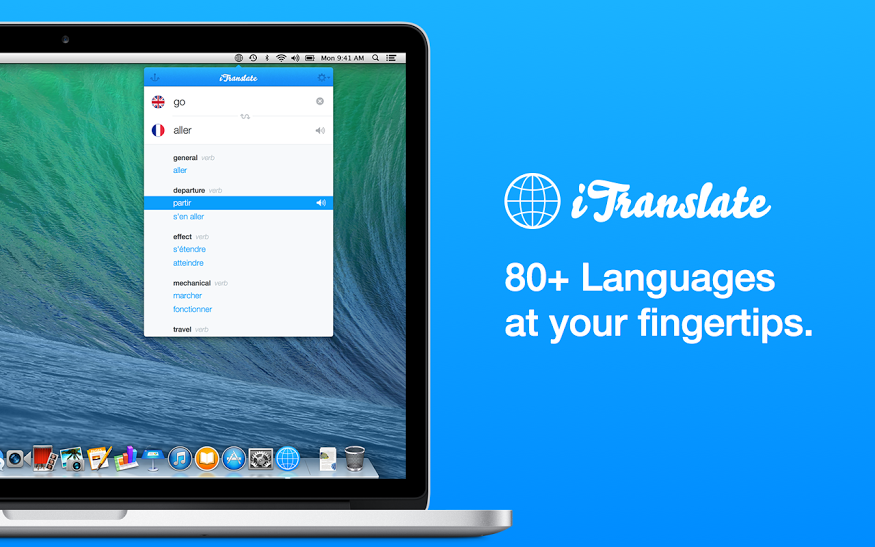 German developer Sonico Mobile makes some fairly nice translation apps for the iPhone. Their excellent iTranslate app, available free for the iPhone and iPad, allows you to translate words and text into over 80 languages.

It supports voice input and output for most language pairs, which works much better than you’d think in terms of dialects, gender, speaking rate and other variables affecting translation accuracy.

Sonico is now bringing that same experience to your Mac with the launch of the native iTranslate for Mac app, a free download from the Mac App Store. With over 80 languages supported out of the box and features like voice output, fast text input, romanization and built-in dictionaries, Sonico’s software enables the App Store’s most popular translator tool on your Mac…

The feature-packed Mac app and its iOS counterpart now share the same streamlined interface so you can change languages with a single click, get translations fast and even receive suggestions for the words, as you’re typing them.

The app sits in your Mac’s menu bar, ready to be brought to the foreground with a customizable keystroke. Spoken results make it easier to learn foreign language pronunciation while a built-in dictionary helps determine the meaning of words. 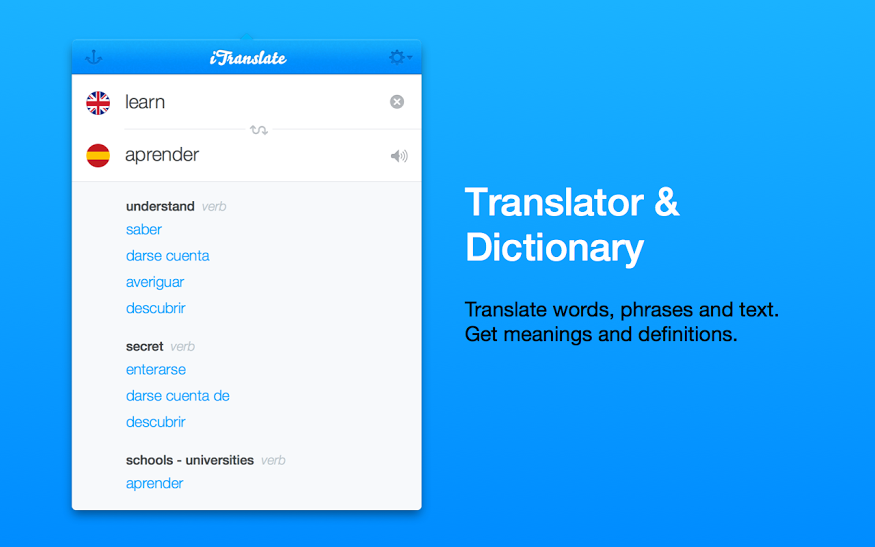 The romanization feature is especially interesting and useful. In short, it lets you read languages like Chinese, Russian and Arabic by transforming their non-Latin characters into Latin variants.

My only gripe with the app is that is that it requires you to be connected to the Internet because all the heavy-lifting in terms of dictionaries, text-to-speech and translation is being carried out by the Sonico cloud.

Last summer, I reviewed Sonico’s nicely done iTranslate Voice for iPhone and iPad with an interesting AirTranslate feature. In a nutshell, AirTranslate is a voice-to-voice translator that works by connecting two devices wirelessly, as depicted below.

It makes it ridiculously easy for you and your foreign friend to talk to each other in your own language as the app translates your words and sentences on the fly.

iTranslate four Mac is available for $4.99, a 50 percent discount to celebrate the launch. Minimum system requirements include a Mac with a 64-bit Intel processor and OS X 10.8 or later.

iTranslate is available for a bunch of other platforms and devices as well so hop over to the official website to learn more.