German developer Sonico Mobile’s iTranslate Voice (not to be confused with dozens of App Store apps that have ‘itranslate’ in their name) has been on the App Store since May 2012, scoring rave reviews and winning the attention of App Store editors who featured the software on multiple occasions.

A little over a year since its debut they totally revamped the app, adding new languages and language facts and an incredible device-to-device AirTranslate feature.

Unlike many other apps that claim to feature quick voice-to-voice translations, iVoice Translate works as advertised and gets the job done, letting you instantly “speak” another language, voice-to-voice…

AirTranslate is a headline new capability.

This feature lets you connect with another iPhone or iPod touch over Bluetooth so you and your foreign friend can talk to each other in your own language, letting iVoice Translate do it magic on the fly. 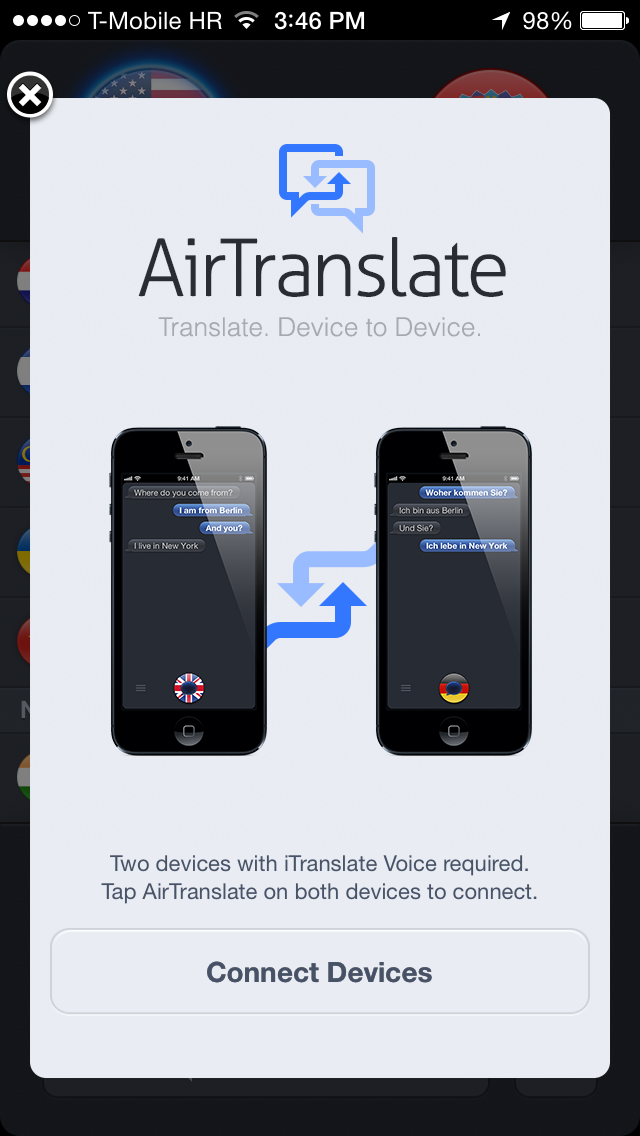 AirTranslate is quite useful when engaging in conversation with other people.

If you’re unfamiliar with iTranslate Voice, get up to speed by watching the quick video tour below depicting AirTranslate in action or check out the official website.

As the screenshots attest, the app’s been completely redesigned for simplicity. Everything now defers around a pair or round language icons at the bottom. To choose your language pair and voices, grab the handle at the bottom and swipe up to access settings. 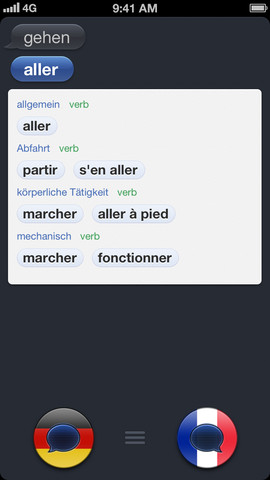 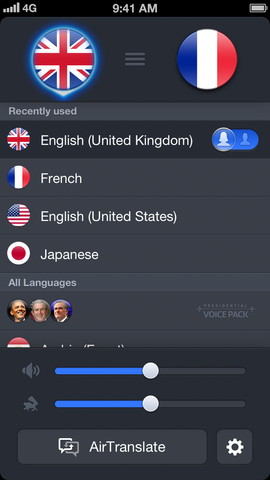 Here, you can also set the volume and speed of text-to-speech (audio over AirPlay is supported), quickly access recently used languages and tap the gear icon to reveal advanced settings, as shown below. 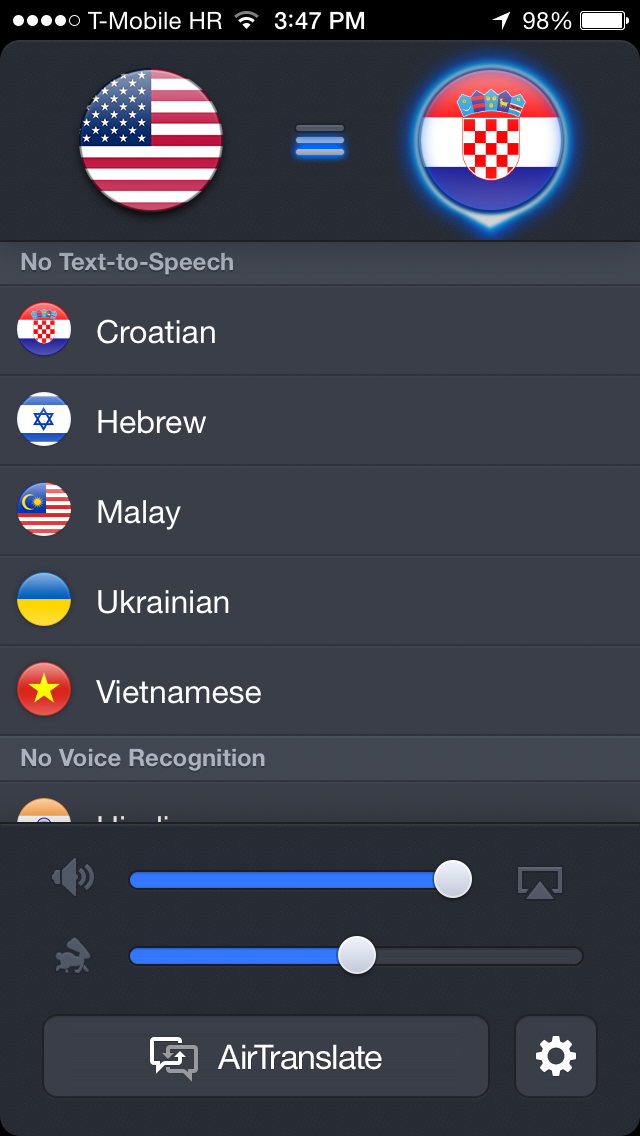 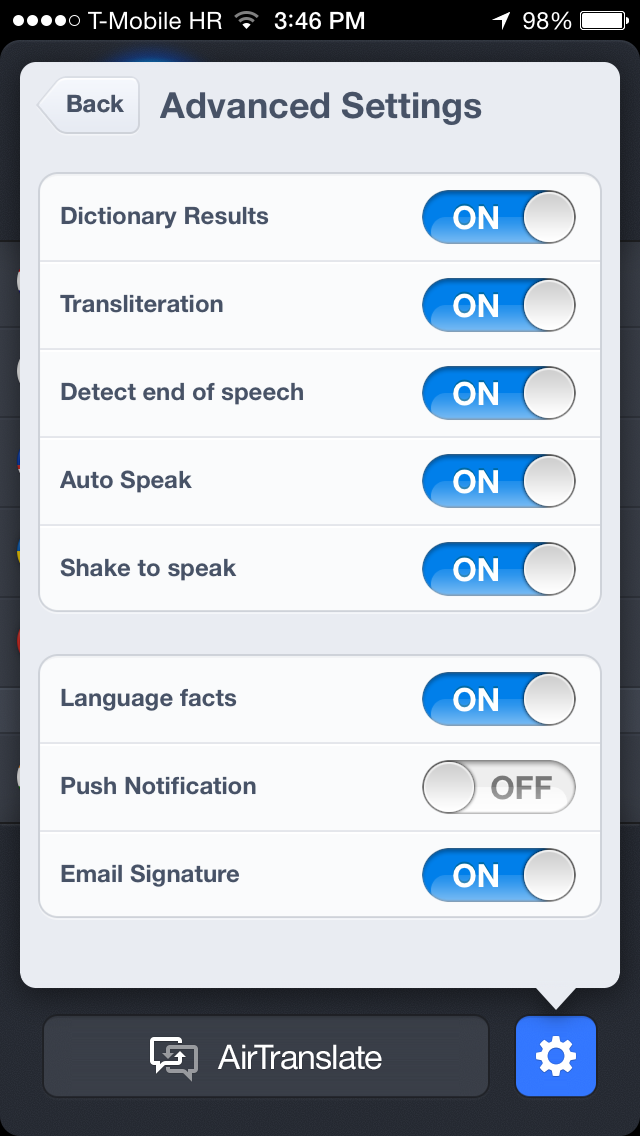 When done, tap the language icon pair at the bottom and speak a phrase, a word or whole sentences into a microphone. A moment later, accurate text-to-speech will turn your spoken word into text and instantly speak aloud the translation. 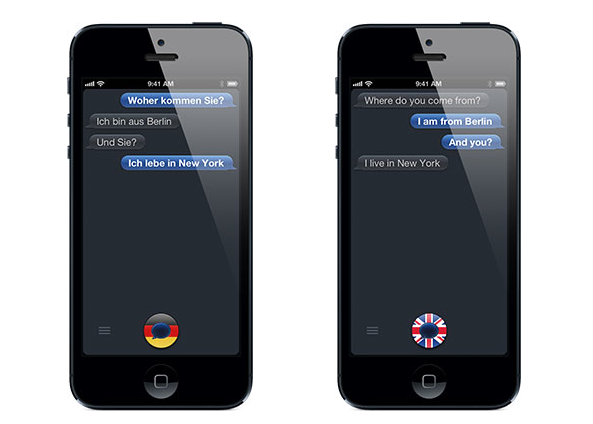 The interface, somewhat reminiscent of Siri in iOS 6, doesn’t get any simpler and more accessible than this, which is saying a lot about Sonico’s design prowess. All told, the revamped edition now features over 40 languages, including Thai, Catalan with full voice recognition, Hebrew, Ukrainian, Malay, Croatian and Vietnamese.

Yours truly, a homegrown Croat, is pleased to report that iTranslate Voice was surprisingly accurate in translating my Croatian phrases and sentences into English and other languages. 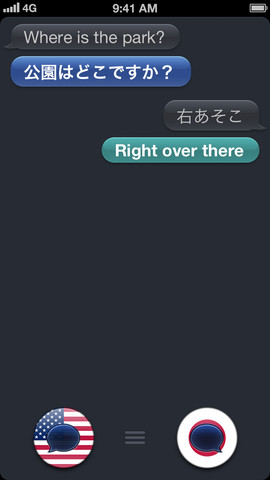 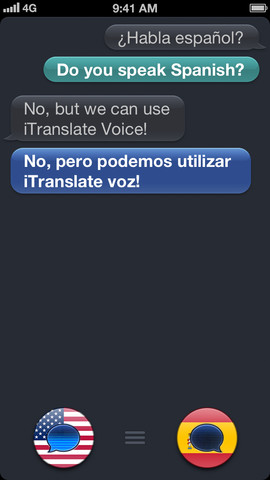 This is a test other voice-to-voice translators too often miserably fail to pass – the reason for this being the complexities and dozens of accents making my language one of the most difficult for Americans to master.

In fact, due to these woes the app actually lacks text-to-speech for Croatian, Hebrew, Malay, Ukranian and Vietnamese. Similarly, voice recognition is not supported for Hindi.

As for the language facts, just pull down on the tittle screen to retrieve a random fact about your chosen language. Tapping the little Share button right below the text lets you copy the factoid to clipboard or choose one of the native iOS sharing options (SMS, Email, Twitter or Facebook). 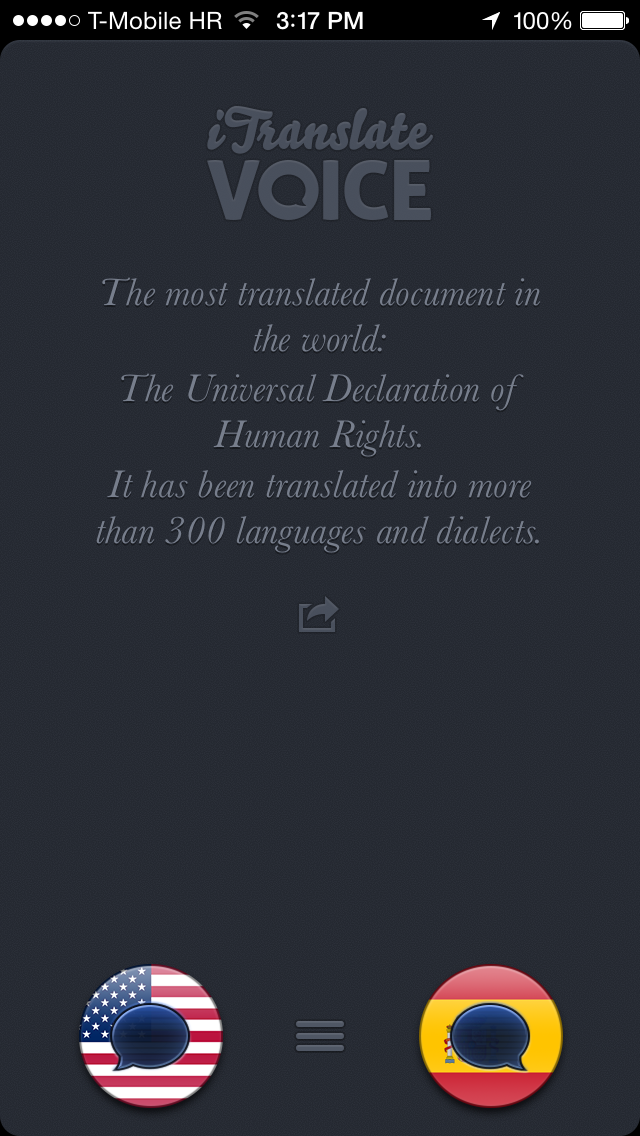 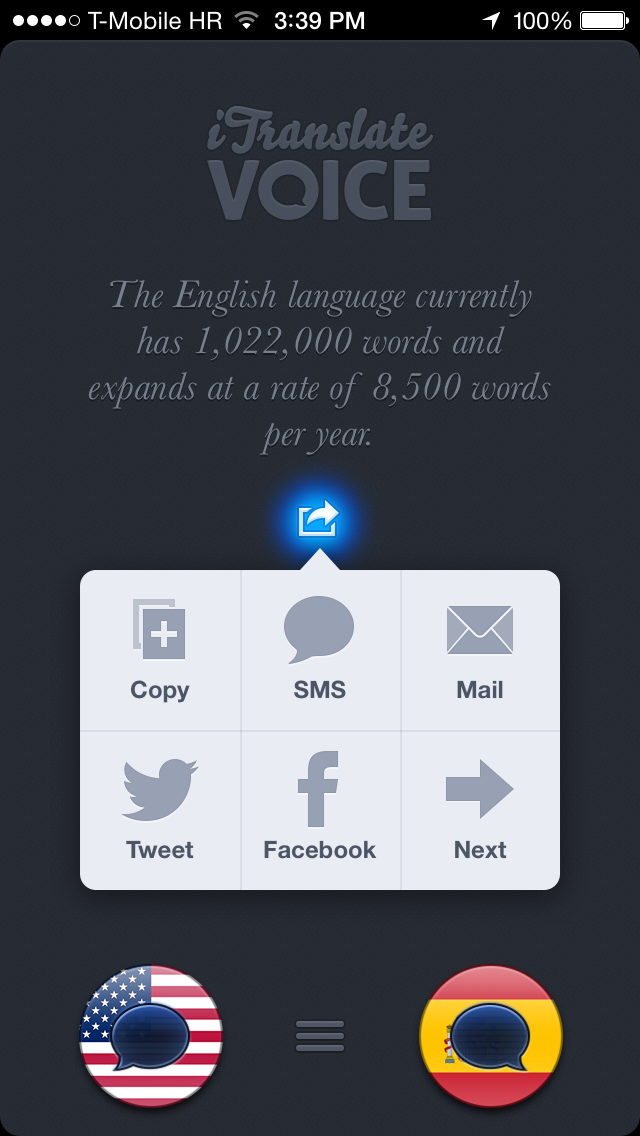 On the fun side, this edition of iTranslate Voice also brings a Presidential voice pack.

Yes, it does exactly what the name suggests, replacing default text-to-speech voice with distinctive and scary-accurate voices of U.S. Presidents Barack Obama, George W. Bush and Mitt Romney (to be fair, Romney was Republican Party’s nominee for President of the United States in the 2012 election, not a U.S. President).

Unfortunately, the Presidential voice pack isn’t included by default and is an additional 99-cent in-app purchase. I’ve found Presidential packs fun to play around with and never regretted dropping 99 cents. 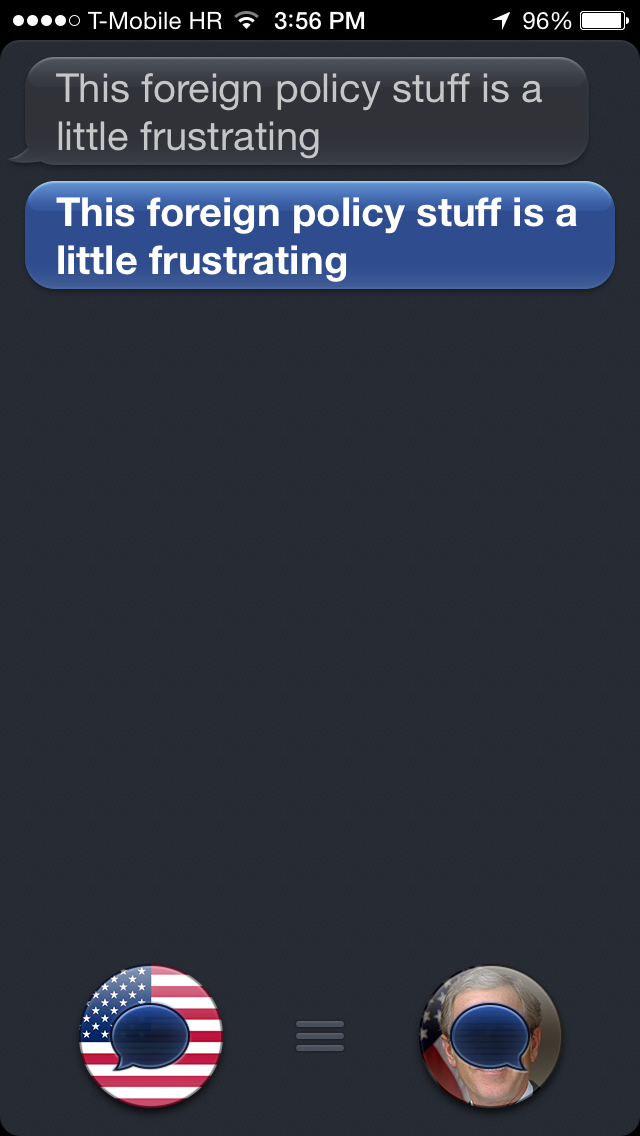 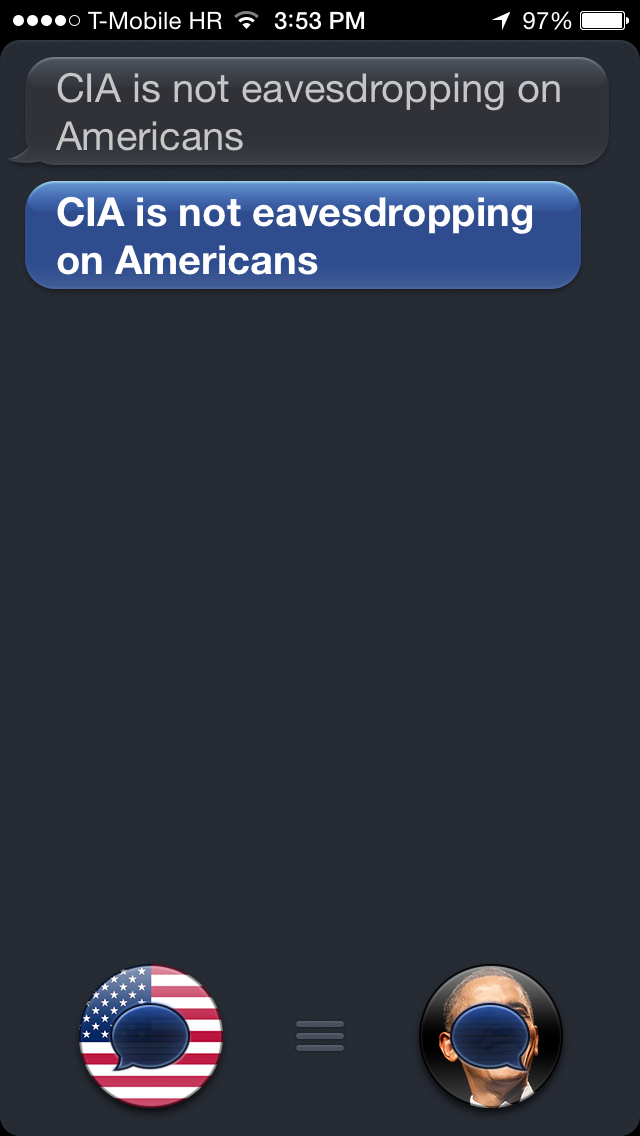 Summing up, iTranslate Voice makes offline translations more affordable than ever. The app will run you 99 cents a pop, which I think is a small price to pay for effortless voice-to-voice translations.

For those travelling a lot – or even if you’re just eager to learn a new language – iVoice Translate is a steal.

Sonico Mobile is also behind the offline translation dictionary app called Languages and the tremendously useful Files App which we reviewed back in February.