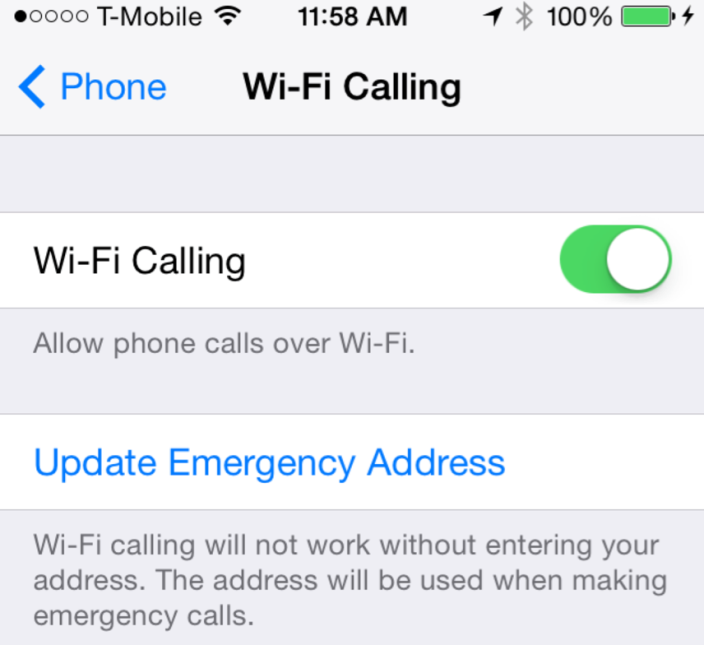 Last month, T-Mobile confirmed that it will support iOS 8’s new Wi-Fi calling feature when the update officially launches this fall. And today, the feature went live for developers with T-Mobile iPhones in the just-released iOS 8 beta 3.

For those unfamiliar with Wi-Fi calling, it allows users to place phone calls [natively] from their device over a Wi-Fi network, instead of their cellular network. Benefits of the feature include better call quality and improved battery life…

Here’s a note from CMO Mike Sievert on why T-Mobile’s Wi-Fi calling offering:

Since we launched Wi-Fi Calling over seven years ago, our engineers have continued to deliver quality and user experience enhancements. As a result, our service is one of the most advanced natively-integrated Wi-Fi Calling products in the U.S. We have the deep technical knowledge and the close partnerships with device manufacturers to deliver the Wi-Fi call quality wireless consumers have come to expect from the Un-carrier.

If you have a T-Mobile iPhone, and access to the latest iOS 8 beta, you can find the new feature in the Phone section of the Settings app. Just make sure the option is enabled, and that you’re connected to a Wi-Fi network, and place your call.

In addition to Wi-Fi calling, iOS 8 is bringing about a number of new features and improvements, including interactive notifications, widgets, and more. The update is currently in beta, and is expected to launch to the public in September.