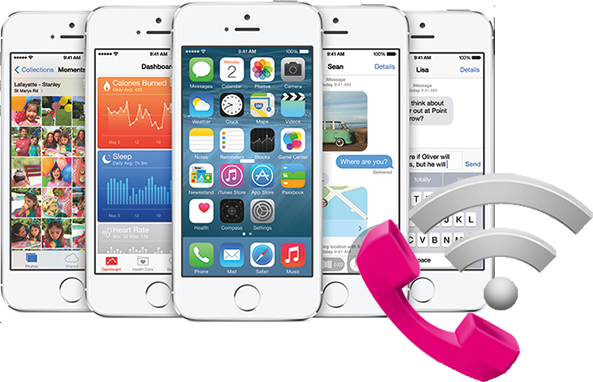 Just a few hours ago, we rounded up a list of iOS 8 features that Apple simply didn’t have much time to mention at its WWDC keynote this afternoon. One of them was Wi-Fi calling, which allows iPhone users to place calls over Wi-Fi as opposed to a cellular network. The feature allows for wireless customers to potentially save money on their monthly plans, which you would think is something that carriers would be against.

Not T-Mobile. Being the awesome underdog carrier that it has been as of late, the magenta-flavored company has embraced the feature with full arms. Earlier today, T-Mobile marketing chief Mike Sievert confirmed in a news release (via MacRumors) that Wi-Fi calling will be enabled for iPhone users on iOS 8, meaning that over 90% of smartphones on the network will be capable of the feature…

Since we launched Wi-Fi Calling over seven years ago, our engineers have continued to deliver quality and user experience enhancements. As a result, our service is one of the most advanced natively-integrated Wi-Fi Calling products in the U.S. We have the deep technical knowledge and the close partnerships with device manufacturers to deliver the Wi-Fi call quality wireless consumers have come to expect from the Un-carrier.

iPhone users will simply need to make sure that Wi-Fi calling is enabled to make use of the feature, with no app or additional setup required. There are several benefits to Wi-Fi calling, including improved call quality and battery life. As I previously mentioned, another obvious benefit is that iPhone users can save minutes and data towards their plan, which could potentially mean additional savings in their pockets.

Will you make use of Wi-Fi calling?