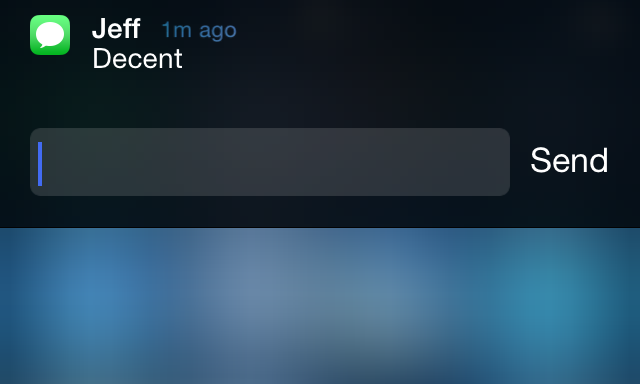 If someone told you that six months ago that quick reply for Messages would be a feature in iOS 8, most people would probably say that it would be the headline feature for the updated OS. But Apple cranked it up a few notches, unveiling new features like Continuity and extensions, and suddenly quick reply no longer seemed like that big of a deal.

But let’s face it, quick reply is still very much a big deal. In fact, it’s such a wanted feature that there have been tons of jailbreak tweaks in the past that have brought some form of quick reply to the table for jailbroken users.

The latest such tweak aims to mimic the quick reply style found in iOS 8 to a close degree. Have a look at our video walkthrough past the break to see Interactive Message Notifications in action.

Once you install Interactive Message Notifications, you can begin using it immediately. In fact, there are no options to configure for the tweak whatsoever.

To use Interactive Message Notifications, swipe down on an incoming banner notification to display a quick reply option that looks strikingly similar to the interface contained within iOS 8.

Interactive Message Notifications is serviceable, but if you’re going to add quick reply functionality by means of a jailbreak tweak, I’d definitely recommend checking out some of the better options out there. Auki, and Sebastien’s favorite, biteSMS, quickly come to mind.

If you’re interested in taking this tweak for a spin, then head over to the BigBoss repo where it can be purchased for $0.99. What do you think?