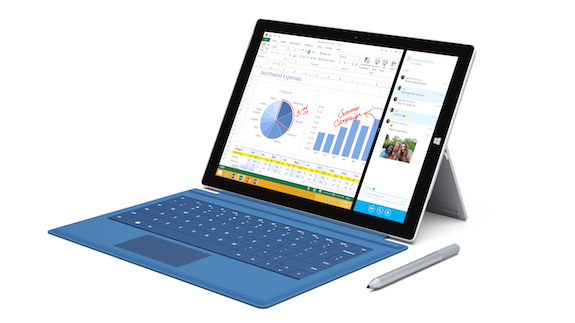 Microsoft has kickstarted an aggressive sales promotion for the all-new Surface Pro 3, offering customers that trade in select MacBook Air models up to $650 towards the purchase of the tablet. In order to be eligible for the store credit, the MacBook Air must be in working order with no cracked screen or water damage. The trade-in value is then determined in store based on the condition of the notebook, alongside any documentation and accessories. Not valid online.

In order to get the maximum discount possible, the store credit must be used towards the purchase of a new Surface Pro 3. The third-generation Surface Pro tablet has a thinner and lighter build than its predecessors, with a 12-inch display that has a resolution of 2160 × 1440 pixels and 3:2 aspect ratio. The device is said to the thinnest ever to have a desktop-class Intel Core i3, i5 or i7 processor…

If you are able to get the full $650 value for your MacBook Air, you could potentially get a brand new Surface Pro 3 for just $149 plus tax. The tablet comes preloaded with Windows 8.1 Pro, which can install full desktop software like the Microsoft Office suite and thousands of other programs created for Windows. The Surface Pro 3 starts at $799, with a $129 attachable keyboard available.

Make sure you read the fine print:

“Any appraised value will be determined at trade-in and provided as store credit, subject to Microsoft’s discretion and approval. All trade-ins are final. Recycle for Rewards program provided by CExchange, LLC., and other terms and conditions may apply. See store associate for details. Not valid on prior orders or purchases; cannot be transferred or otherwise redeemed for cash or gift cards. Not combinable with other offers. Discount does not include taxes, shipping or other fees. Void where prohibited or restricted by law. Microsoft reserves the right to modify or discontinue offers at any time. Limit 1 per trade-in/purchase.”

Microsoft has failed to capture much of the tablet market with its Surface lineup of tablets, despite modest year-over-year growth. Business Insider estimated that Microsoft sold just 830,000 Surface tablets during the first quarter, compared to nearly 16.5 million iPads. Apple had a leading 32.5% of tablet market share during the first quarter, while Microsoft accounted for a less than 2% stake.

Perhaps this trade-in deal, which runs from June 20th through July 31st, will give Microsoft a much-needed push in the right direction.

Will you consider acting on this deal?