As expected, Apple is out with its financial report for Q2 2014 this afternoon. In a press release issued just a few moments ago, Apple announced that it sold 43.7 million iPhones, 16.3 million iPads, and pulled in $45.6 billion in revenue during its fiscal Q2.

Other than iPad sales, Apple beat the Street estimates by a wide margin. The Cupertino company also announced an accelerated strategy for its stock buyback plans, adding an additional $30 billion to the pot (for a total of $90 billion), as well as a 7-1 stock split…

Here is the full breakdown of Apple’s Q2 earnings:

“We generated $13.5 billion in cash flow from operations and returned almost $21 billion in cash to shareholders through dividends and share repurchases during the March quarter,” said Peter Oppenheimer, Apple’s CFO. “That brings cumulative payments under our capital return program to $66 billion.” 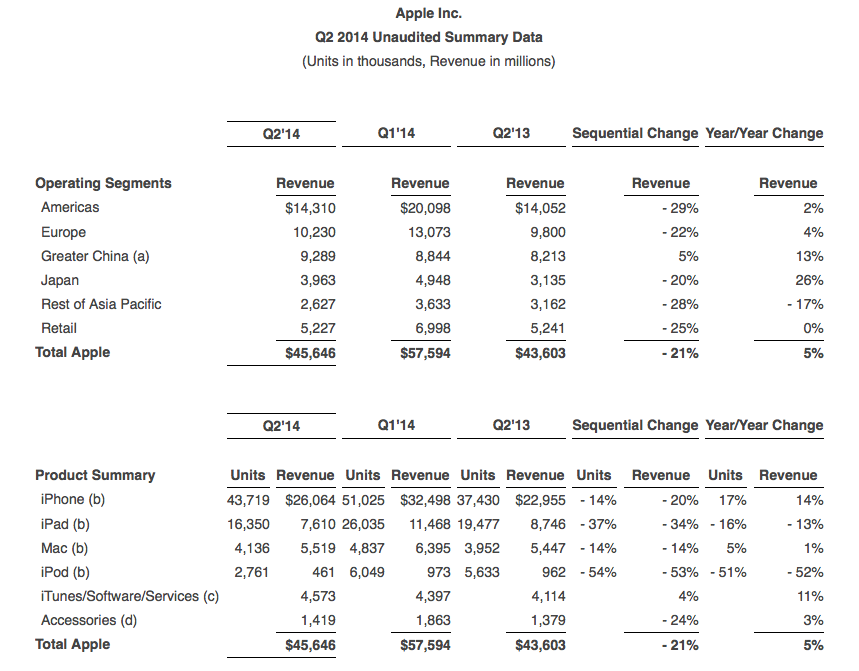 The last time Apple split its stock was back in 2005. Shareholders will receive six additional shares for each share they hold and the share price will drop to around $80. The company also increased the dividend by 8% per share, and says it plans to do so yearly.

Apple’s earnings call will start in just a few minutes. If you’d like, you can listen to a live webcast of the call via Apple’s online investors portal. Or, as usual, you can continue to check back with iDB later this afternoon for commentary and major announcements.