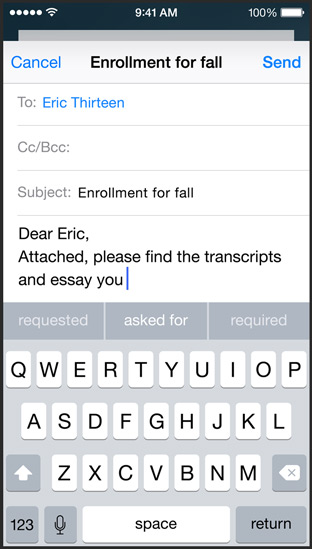 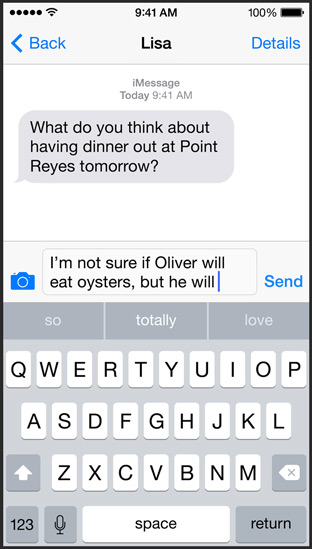 Apple has just announced that the iOS software keyboard is getting a boost in iOS 8 with an all new QuickType keyboard which enables predictive suggestions inside iOS Messages and other apps, in a manner resembling the downloadable Google keyboard and other third-party keyboards available for Android.

QuickType is system wide, it learns how you type to different people and supports Continuity for seamless transition between devices…

So, the big news here is predictive typing suggestions. As you type, the QuickType feature puts up suggestions for the next words you might type.

It’s context sensitive and gets smarter over time.

“And as you use the keyboard over time, it will learn the way you communicate, get to know your favorite phrases, and suggest a logical next word,” writes Apple on the iOS 8 QuickType webpage.

For example, if someone wants to see a dinner and a movie, QuickType will suggest related words. It’s personalized, too – QuickType learns how you type to different people in different apps.

Apple sums it up best:

Now you can write entire sentences with a few taps. Because as you type, you’ll see choices of words or phrases you’d probably type next, based on your past conversations and writing style.

iOS 8 takes into account the casual style you might use in Messages and the more formal language you probably use in Mail.

It also adjusts based on the person you’re communicating with, because your choice of words is likely more laid back with your spouse than with your boss. Your conversation data is kept only on your device, so it’s always private.

Finally, Apple said QuickType in iOS 8 will support fourteen languages at launch so words and phrases that are commonly used in these region will pop up as suggestions.

And knowing Apple, additional languages will be added later by way of software updates. And even if you don’t like QuickType, Apple has said that it will allow third-party keyboards in iOS 8 come this Fall.

According to the firm:

Swipe rather than type, or go old school with the classic keyboard layout. For the first time, iOS 8 opens up the keyboard to developers.

And once new keyboards are available, you’ll be able to choose your favorite input method or layout systemwide.