Ryan Petrich is one of the most influential developers within the jailbreaking scene, with his name behind several well-designed and useful jailbreak tweaks for iPhone and iPad. One of his latest releases is VintageKeys, a useful extension that allows you to adjust the keyboard styling on your device. There are four different keyboards to choose from: modern light, modern dark, legacy light and legacy dark…

The modern keyboards have the iOS 7 style that we’ve become accustomed to over the past year, while the legacy keyboards have the classic appearance from iOS 6 and earlier. A custom keyboard style cannot be configured system-wide at this point, meaning that you will have to go into the VintageKeys menu under Settings and select which keyboard you want on an app-by-app basis. 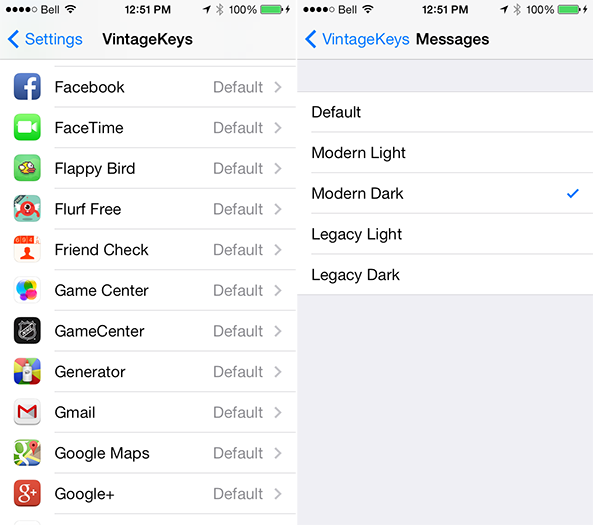 VintageKeys supports both stock and third-party apps, which I tested with Messages, Safari, Tweetbot, WhatsApp, YouTube and other apps to confirm. You do not need to respring your device when you change the keyboard, but switching between modern and legacy styles requires killing and restarting an app. That can be done through the multitasking menu by double tapping the Home button.

If you are looking for a simple and lightweight solution to get the iOS 6 keyboard back, or permanently switch to the dark style, look no further than this tweak. VintageKeys worked just as advertised on my iPhone, without impacting battery life or performance. Best of all, the tweak is free on Cydia by adding the developer’s repository http://rpetri.ch/repo to your sources.

Petrich is best known for Activator, an extension for assigning actions to different tasks on iOS devices. He has also released BioLockdown, ShareLock, SearchSettings, Emphasize, FlipControlCenter, AttachmentEncryptor, Curiosa, DeepEnd, Monocle and several other tweaks, many of which our own Jeff Benjamin has reviewed over the past few years. They’re worth a look.

Do you prefer using the iOS 6 or iOS 7 keyboard?