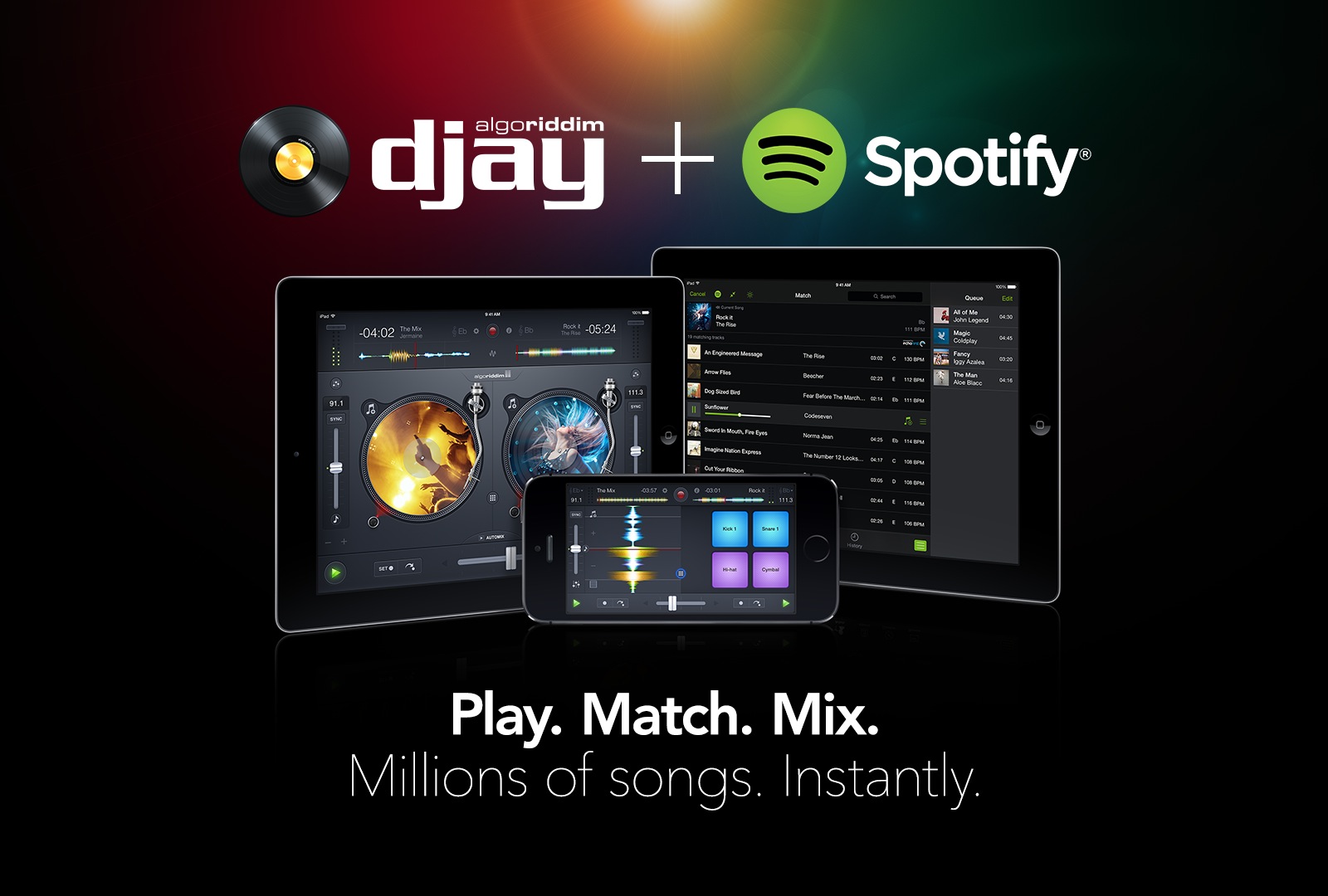 Germany-based Algoriddim – which develops the popular djay software for the iPhone [$1.99], iPad [$9.99] and Mac [$19.99] – today announced a major partnership with Swedish startup Spotify, which operates the world’s leading streaming-music service.

Spotify Premium subscribers and DJ wannabes can now mix any of the more than twenty million Spotify tracks, right inside djay for the iPhone and iPad. This seamless integration extends to such advanced features as Automix Radio, Spotify Match, desktop-class audio effects and pro-grade DJ hardware integration, to name a few.

The newly introduced capabilities are available via a major update to djay for the iPhone and iPad. Based on my brief hands-on time with djay for iPad, I can safely say that Spotify integration has just become a major selling point for these kinds of apps, here’s why…

The Spotify-djay integration is quite seamless.

Not only can you switch between Spotify and your local iTunes library inside Algoriddim’s apps and mix tracks from both sources simultaneously, you’ll also find your Spotify playlists in djay, your starred tracks and even the inbox in case you want to shoot real-time song requests to the DJ. 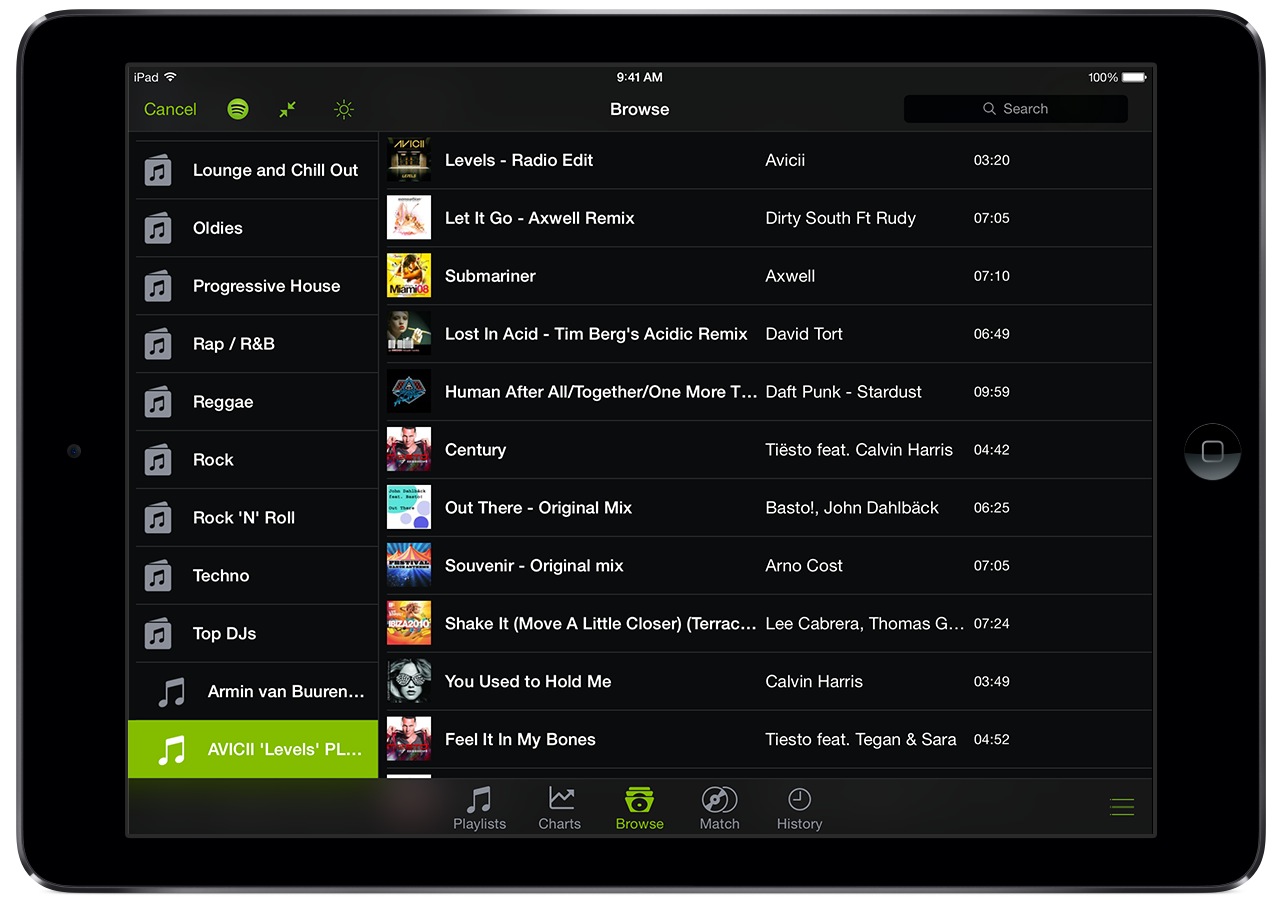 Spotify’s powerful search capabilities, its Match recommendation engine, charts and sorting options (by genre, moods, DJs and what not) are all just a tap away as well. 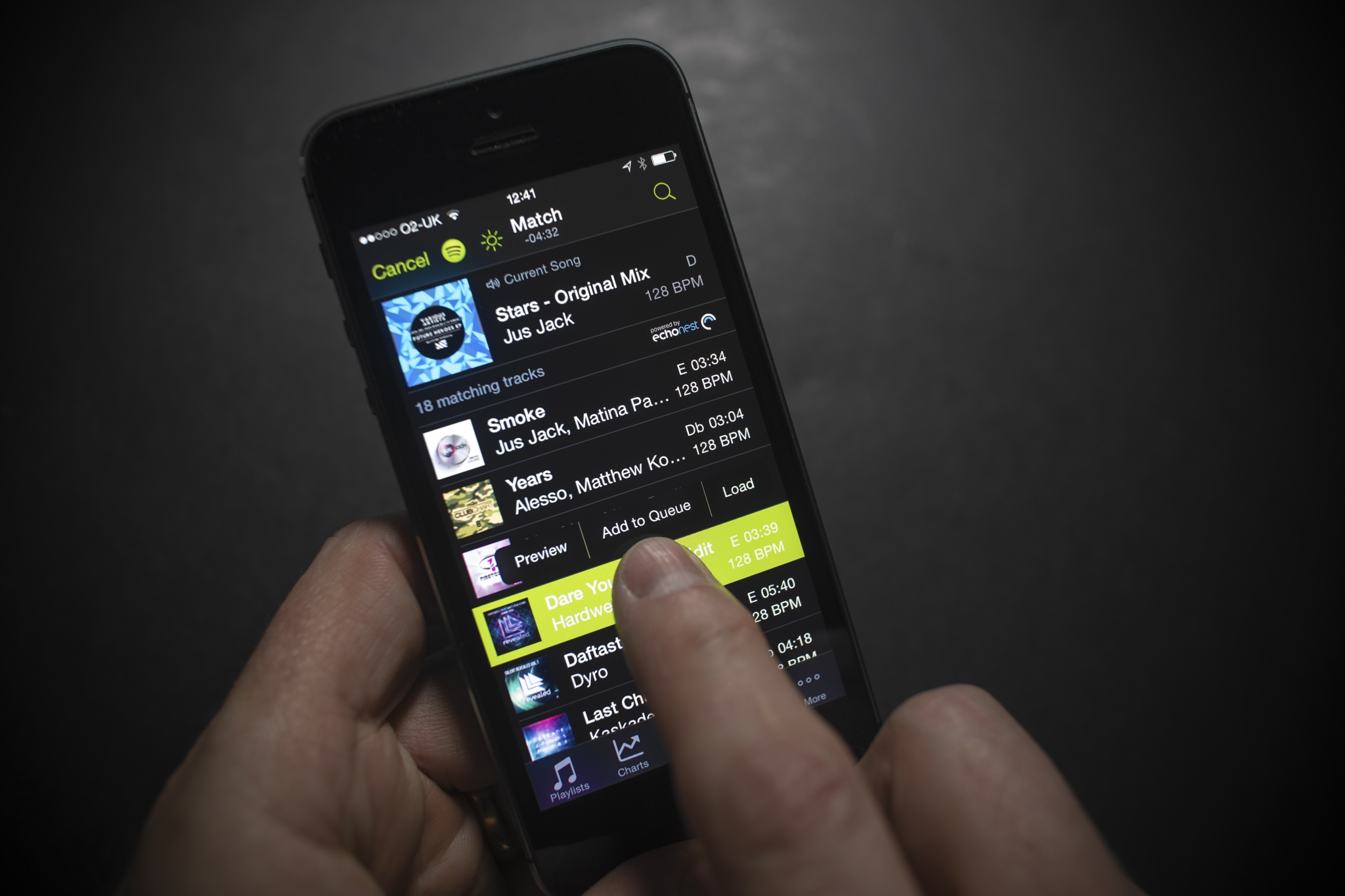 You can add Spotify songs to your queue by swiping, share your set lists as Spotify playlists with friends and even tell djay to adjust to the light/dark mode automagically, depending on your lighting environment. 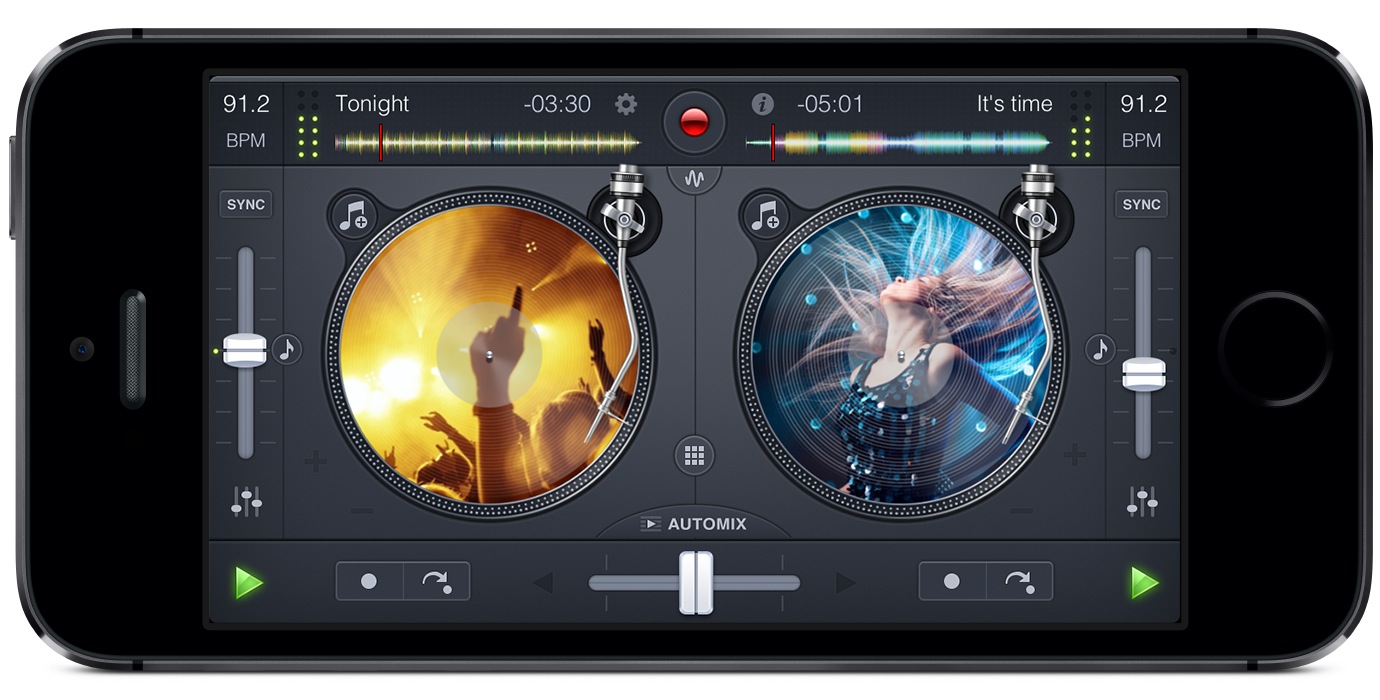 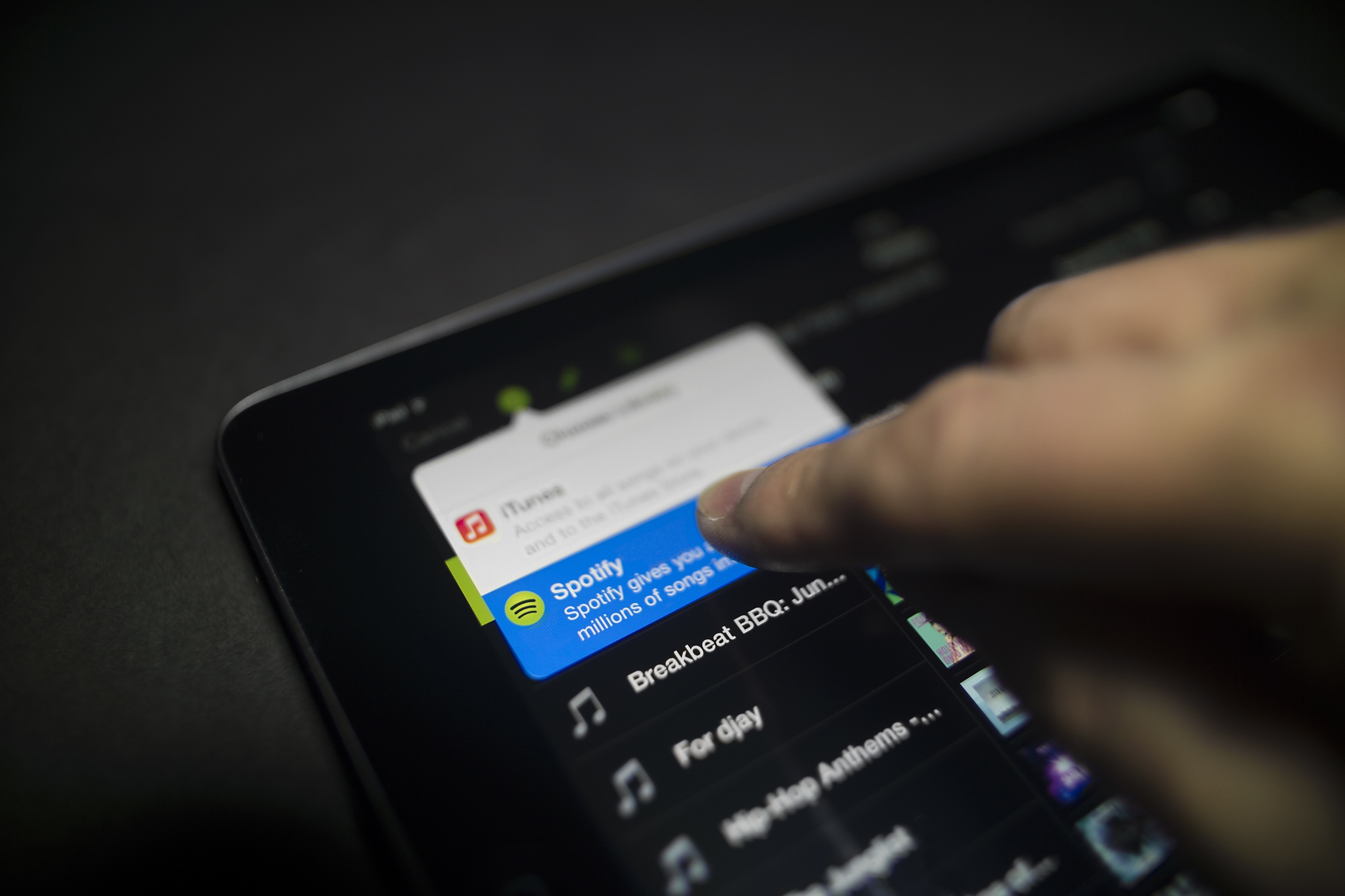 Sometimes, all you want to do is listen to some Spotify songs.

Not a problem: launch djay, open the Automix panel and hit the Start Automix button, as depicted below. This feature is on auto-pilot: the app will select Spotify tracks that go great together and automatically produce beat-matched transitions, like the real DJ. 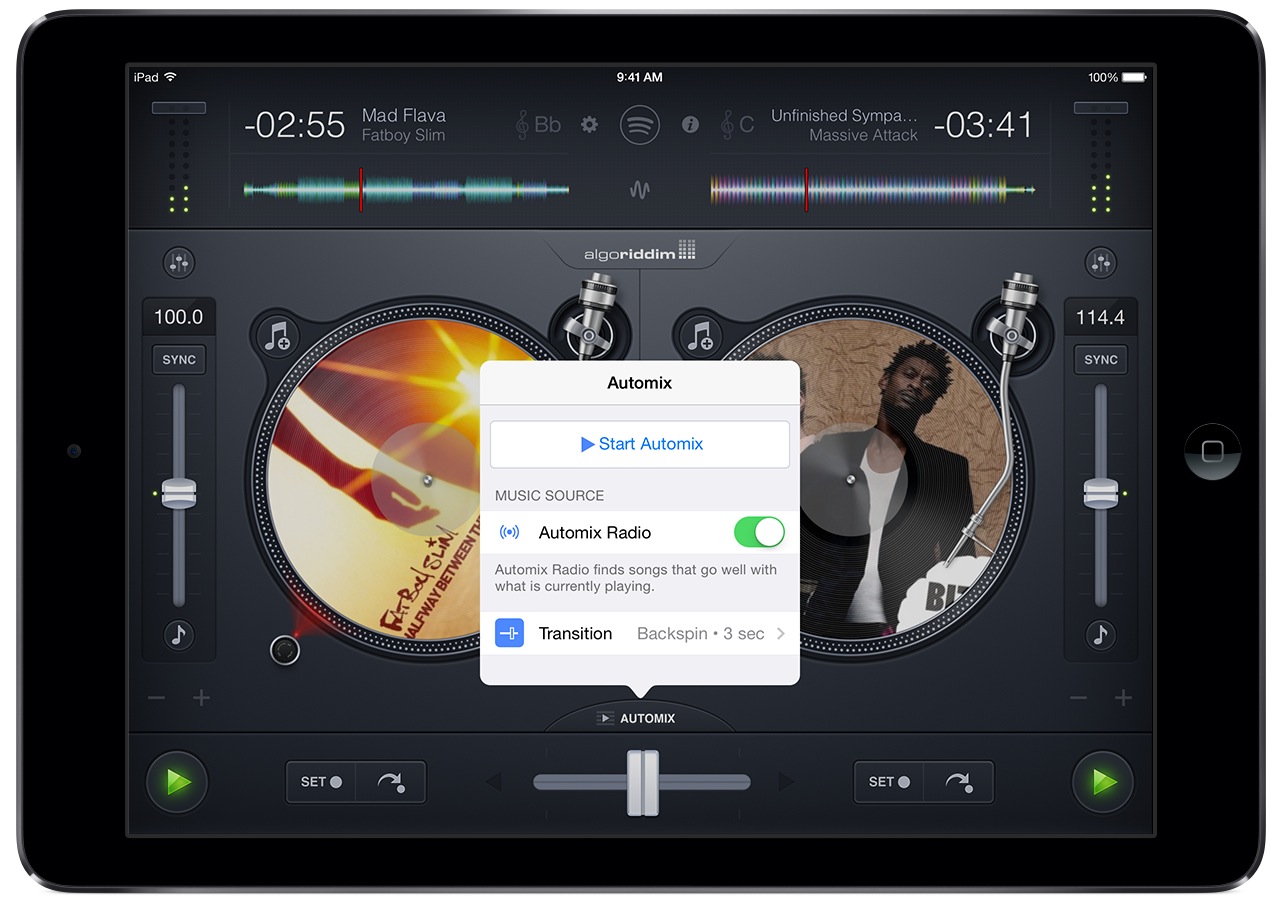 Enabled by tapping the Match tab from djay’s Spotify library, this cool feature powered by The Echo Nest takes the pain out of finding the best next track for your mix. It’s been designed to recommend tracks that go well with what the DJ is currently playing. 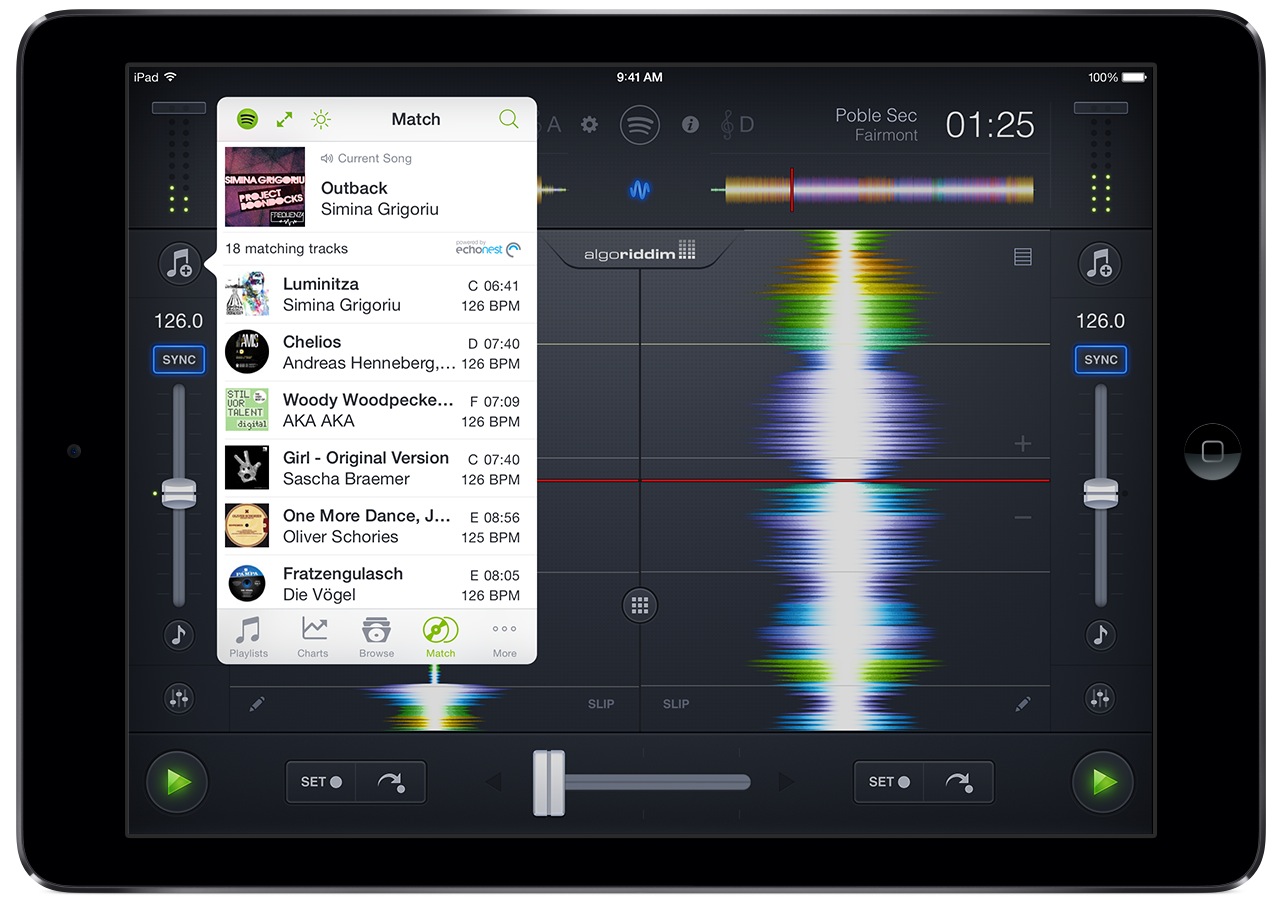 So no matter if you’re a pro DJ or a rookie who doesn’t know a darn thing about mixing, Match will help you create live mixes based on danceability, BPM, key, music style and how well the song mixes with the currently playing track. 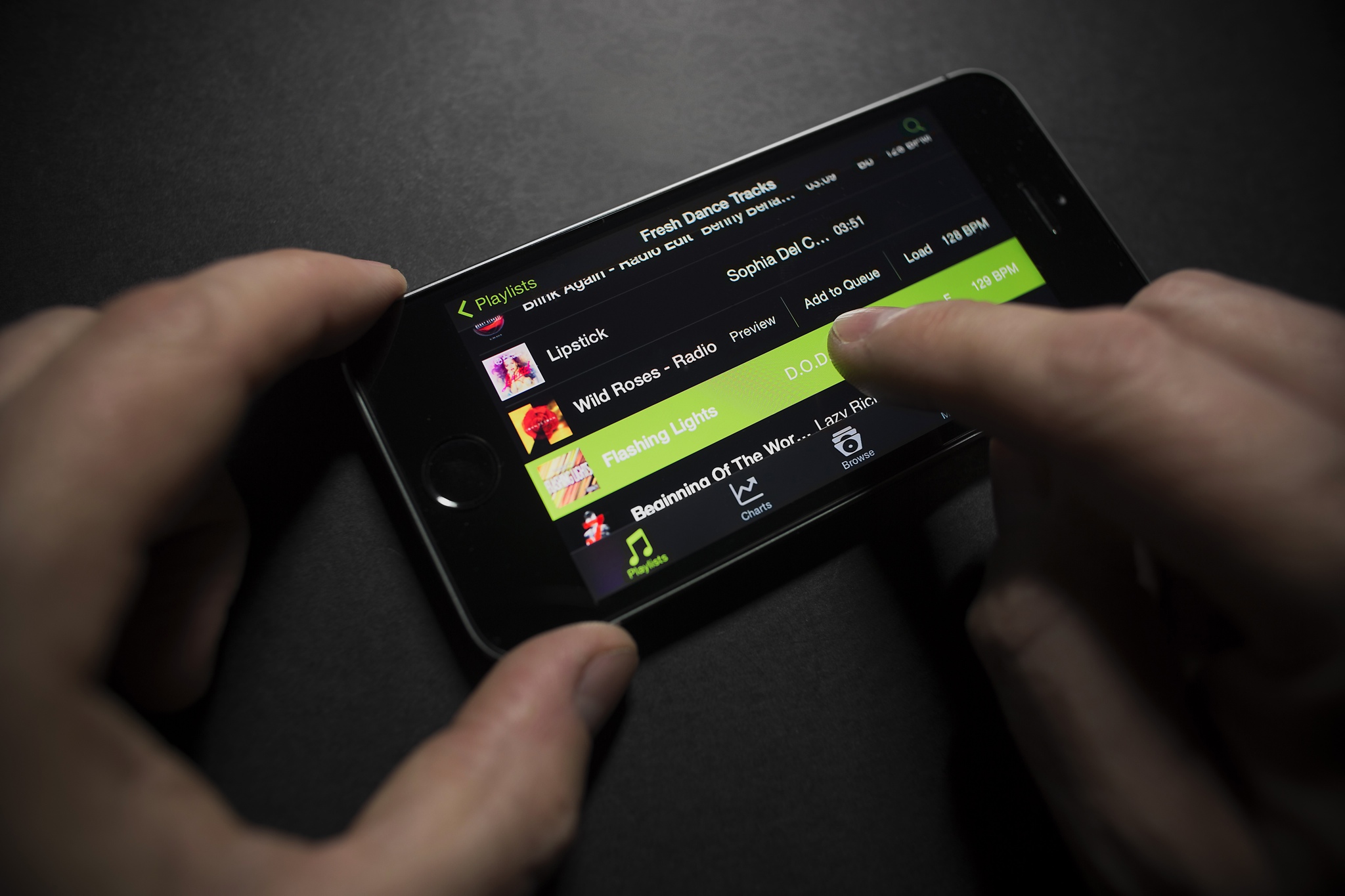 Last but not least, because djay supports a wide range of pro-grade DJ gear from the likes of Pioneer, Numark, Vestax, Reloop, Philips, Casio and Griffin, you will be now able to mix your Spotify songs using real knobs, buttons and jog wheels. 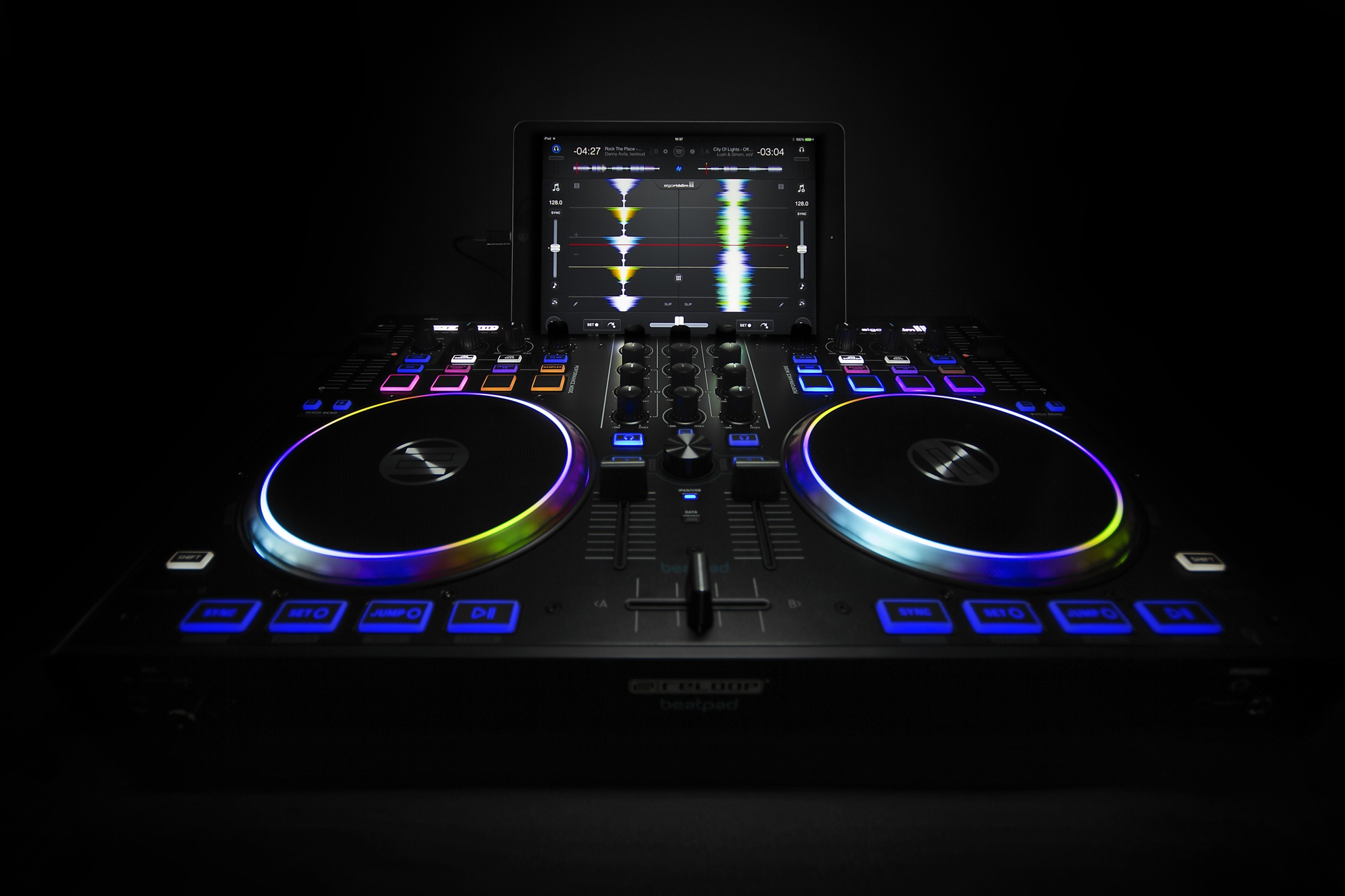 Yes, you can preview each effect before buying.

“These new beat-synchronized effects bring unprecedented creative expression to DJs on iOS and support real-time audio manipulation of both local tracks from iTunes and streamed tracks from Spotify,” explains the firm.

And your quick feature walkthrough.

Tight Spotify integration: Spotify integration in djay 2 includes all of the user’s existing playlists, starred tracks and Inbox (to send real-time song requests to the DJ), powerful search capabilities, top lists, browse (by genres, moods, DJs), and Match (for song recommendation). Users can seamlessly switch between Spotify and their existing local iTunes library, as well as mix tracks from both of these sources.

Social sharing: djay 2 allows users to share their set lists as Spotify playlists via SMS, Email, Facebook, and Twitter, so the rest of the world can listen to the tracks instantly or recreate a great set.

I have no doubt  in my mind that the Spotify + djay combo will mainstream cloud-based mixing because what we have here are services that are market leaders, each in their own right. 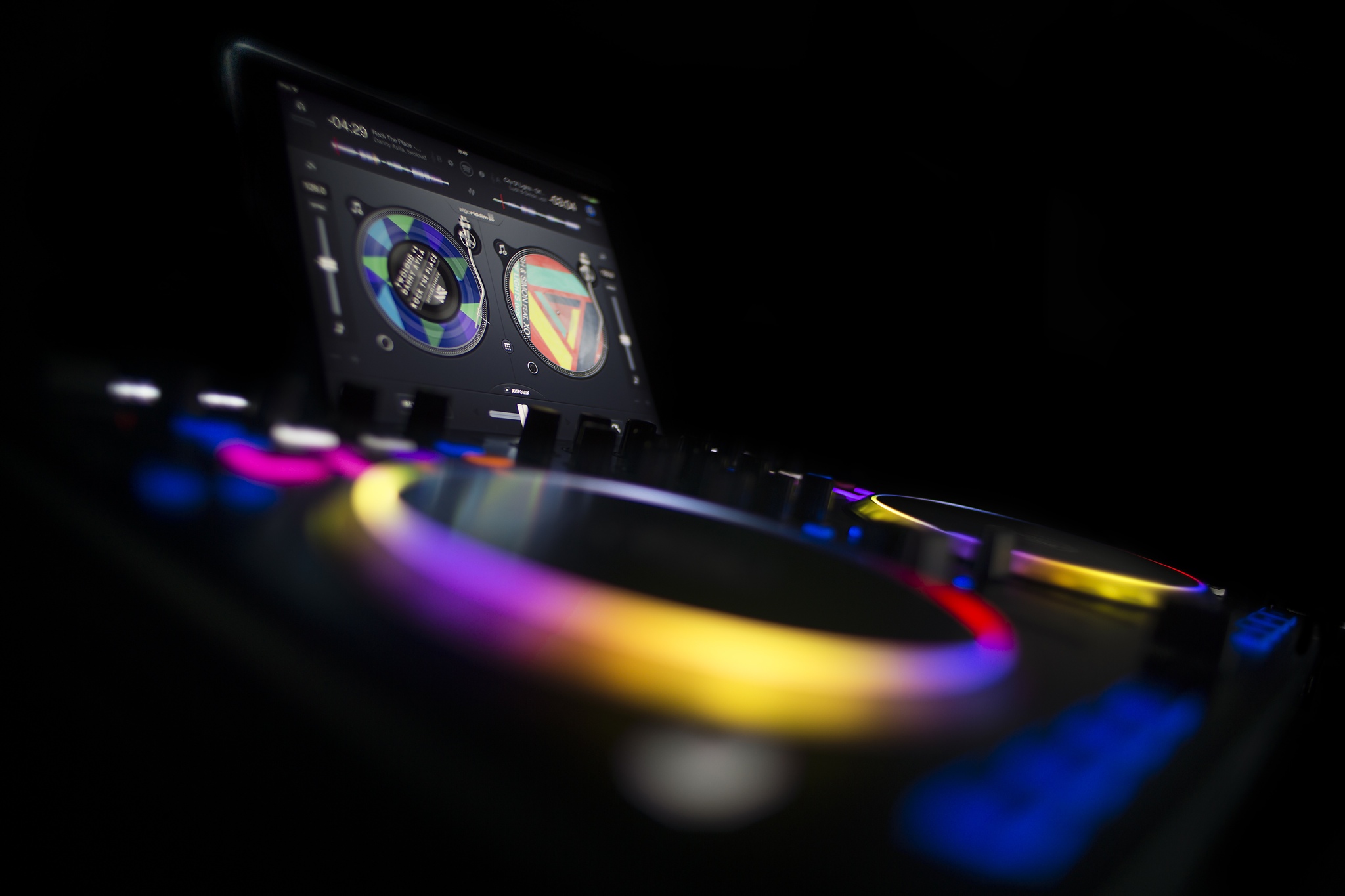 Algoriddim’s djay is the world’s best-selling DJ app with over ten million users on iOS and Spotify said yesterday it now has 40 million active users globally across 56 markets, ten million of which are paying customers who subscribe to Spotify Premium.

The numbers translate into a pretty impressive 25 percent conversion rate, and that’s about ten times higher that what most other streaming app services would consider solid.

Spotify Premium costs ten bucks per month, which buys you ad-free, unlimited streaming in high-quality on all your devices. By the way, U.S. wireless carrier Sprint is currently bundling six free months of Spotify Premium with its ‘Framily’ plan. 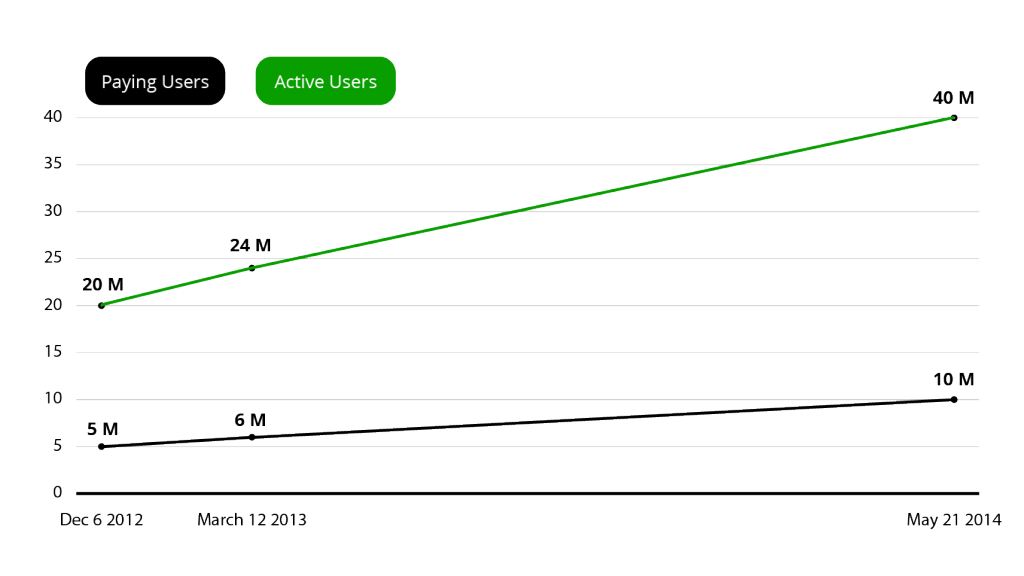 Since its 2008 inception, users have created over 1.5 billion playlists in Spotify.

Five million playlists are being made or edited on a daily basis, helping drive over $1 billion dollars to rights holders [infographic]. And at the current growth pace, Spotify could pay up to $1 billion to right holders in 2014 alone!

Spotify is currently valued at around $4 billion after raising over $500 million in private funding thus far. The startup is thought to be eyeing an IPO this Fall. 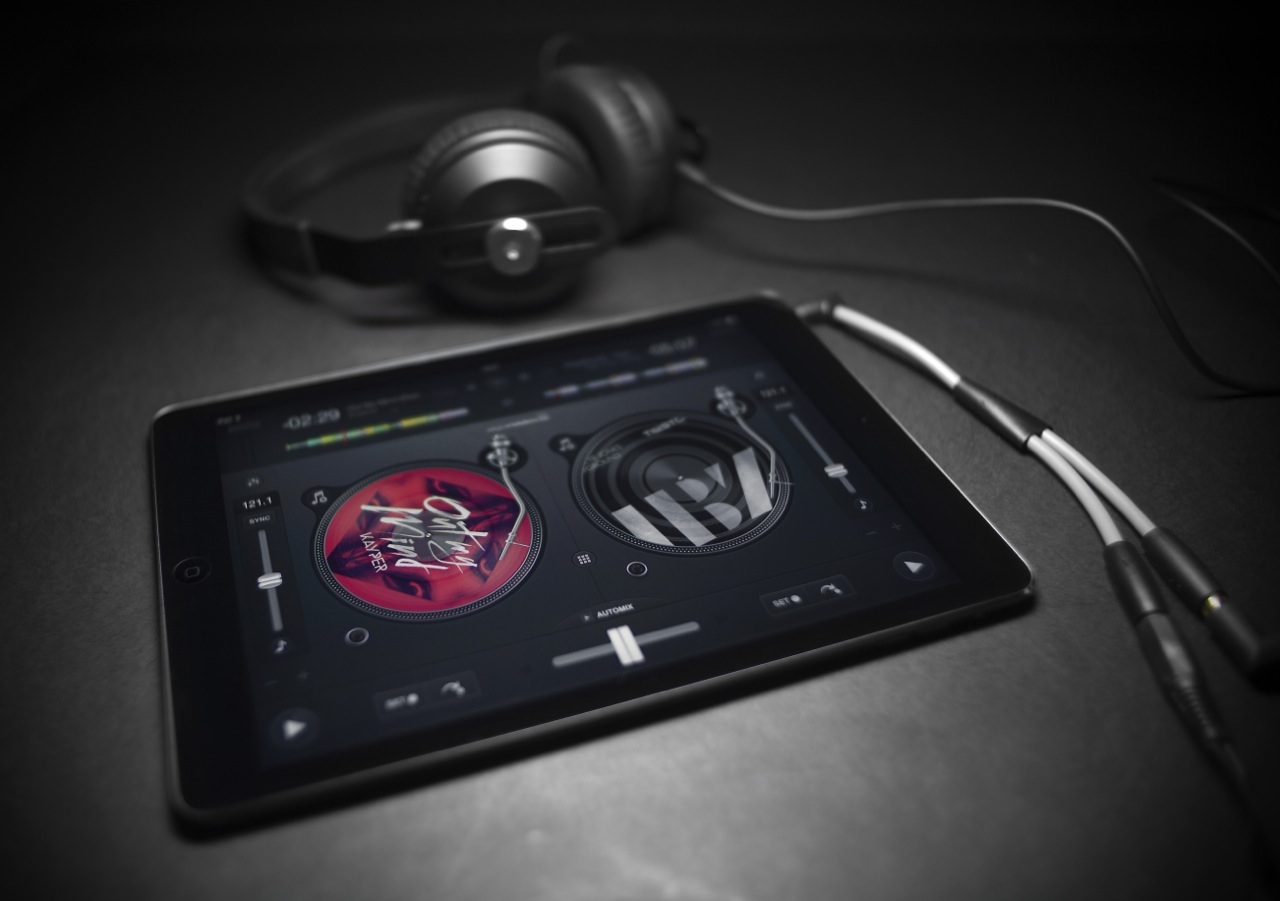 In exploring new revenue streams, Spotify is seemingly mulling a controversial premium subscription for bars, restaurants and other public venues, via a SoundtrackYourBrand service, backed by Spotify and founded by its former head of business development and a Beats Music co-founder.

You can find djay for the iPhone, iPad and Mac in the App Store and the Mac App Store. The iPhone/iPad apps require iOS 6.0 or later (OS X 10.5 or later is required to run the Mac edition).

To celebrate its newly gained Spotify integration, Algoriddim has decided to make djay 2 for iPhone free during the launch week (normally a $1.99 value). Also, djay 2 for iPad is normally $9.99, but will be available for 50 percent off at $4.99 for a limited time.