Since the beginning of cable (it used to be called “pay TV”), people have been complaining about having to pay too much money for channels they don’t want. Unfortunately, cable providers had solid contracts with networks and weren’t willing to make compromises for their customers.

Things have changed a lot since the days of pay TV and you can now get much of the content you really want, without having to pay for 100 channels that you don’t. We’ve got a list of apps for cable subscribers who are finally ready to cut the cord. 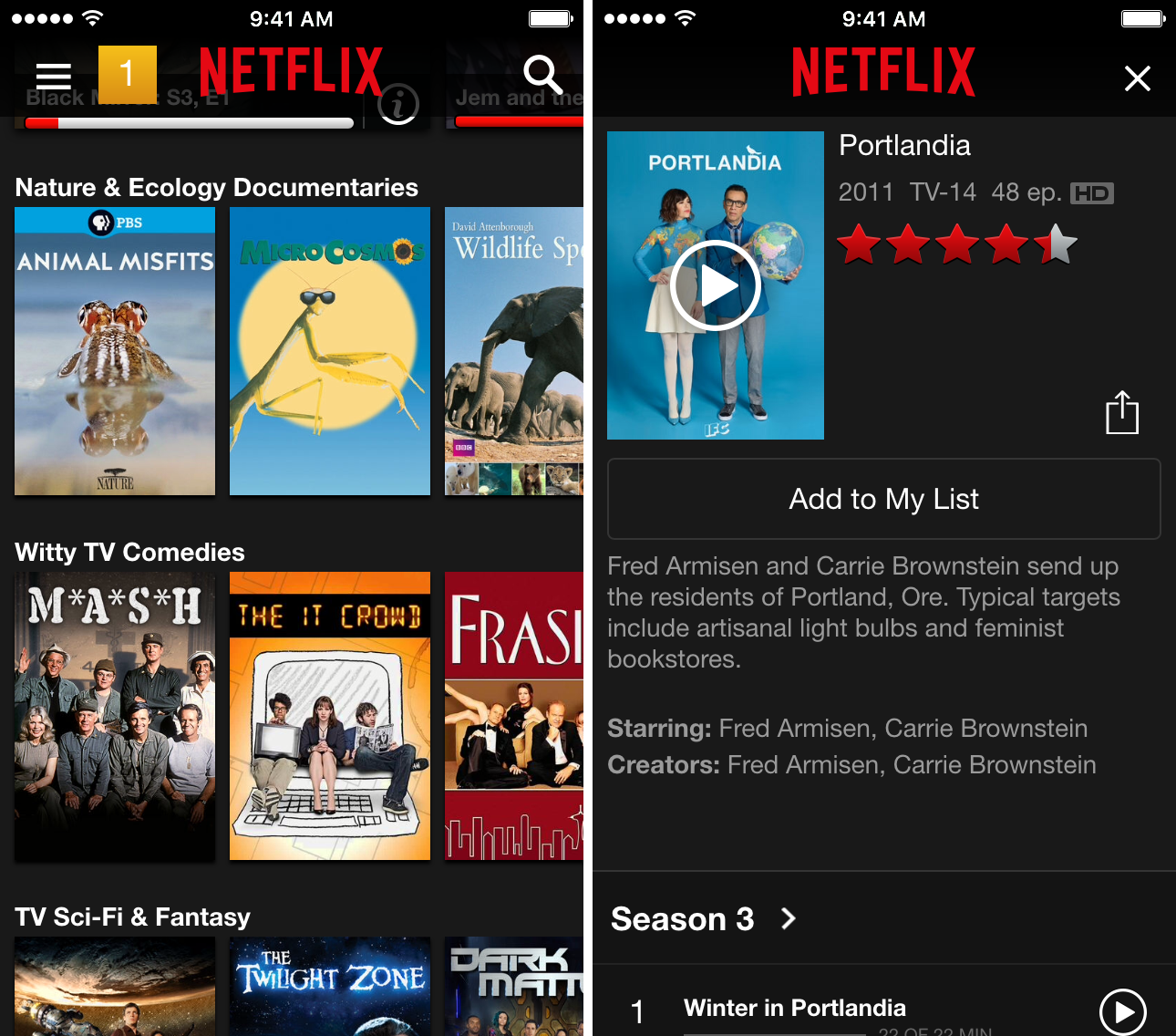 For cord cutters, this is the premier service for streaming thousands of movies in dozens of categories, including some blockbuster hits and full seasons of popular broadcast and cable television shows. Plus, Netflix has exclusive content that you can’t see anywhere else. Log into the Kids section to let the little ones watch whatever they want without fear of them accessing inappropriate content. Subscriptions start as low as $7.99 per month. This app is available for free. 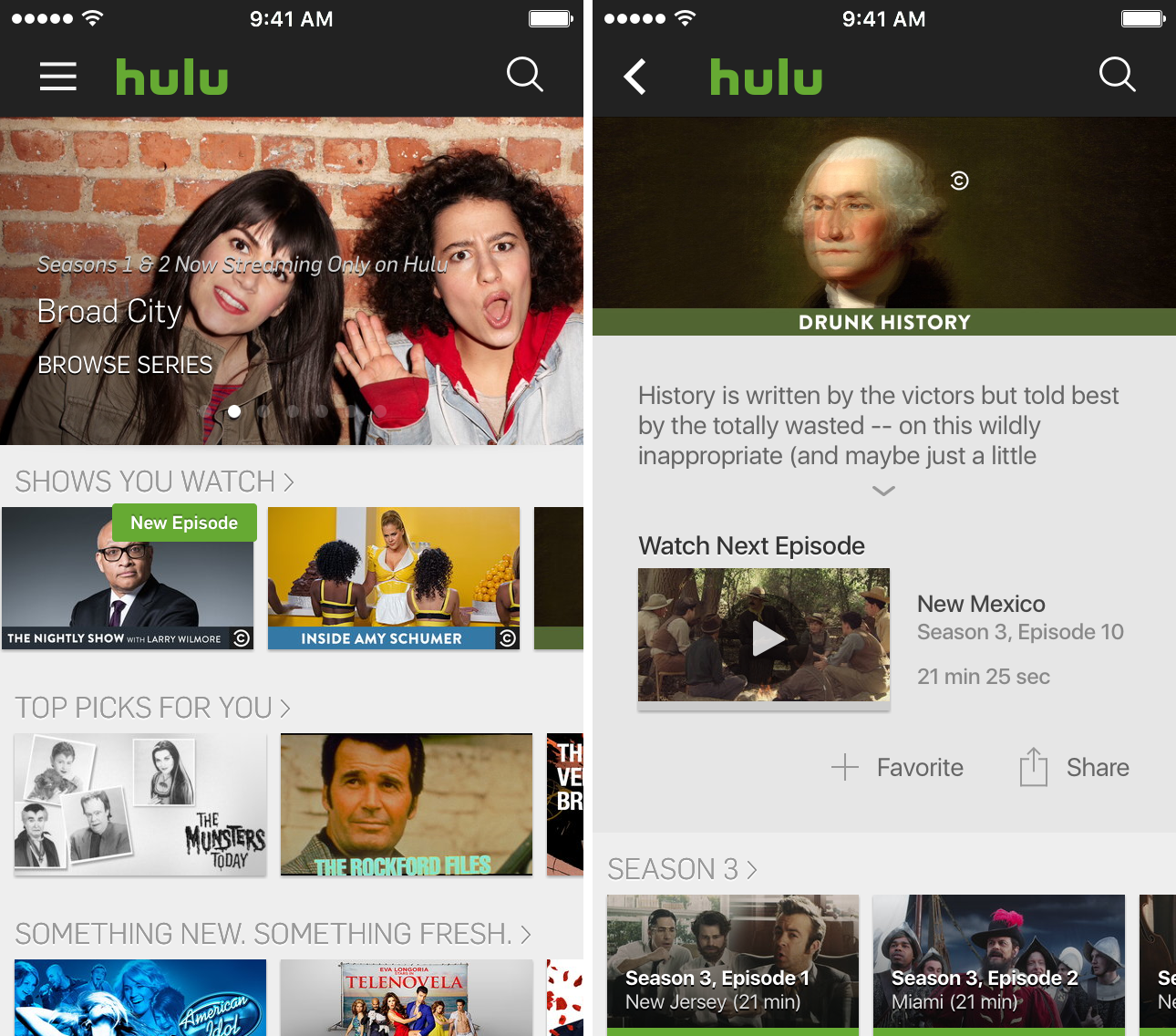 If Netflix is the premier service for movies, then Hulu is the premier service for television shows. You can watch hundreds of current television shows from broadcast and cable networks the day after they air. The company also has a healthy list of nearly new and classic movies that will keep you entertained. Hulu also provides exclusive created content that you can’t watch anywhere else. If you have a subscription to Showtime, you can view the cable channel’s content directly through Hulu. Subscriptions start as low as $7.99 per month. This app is available for free. 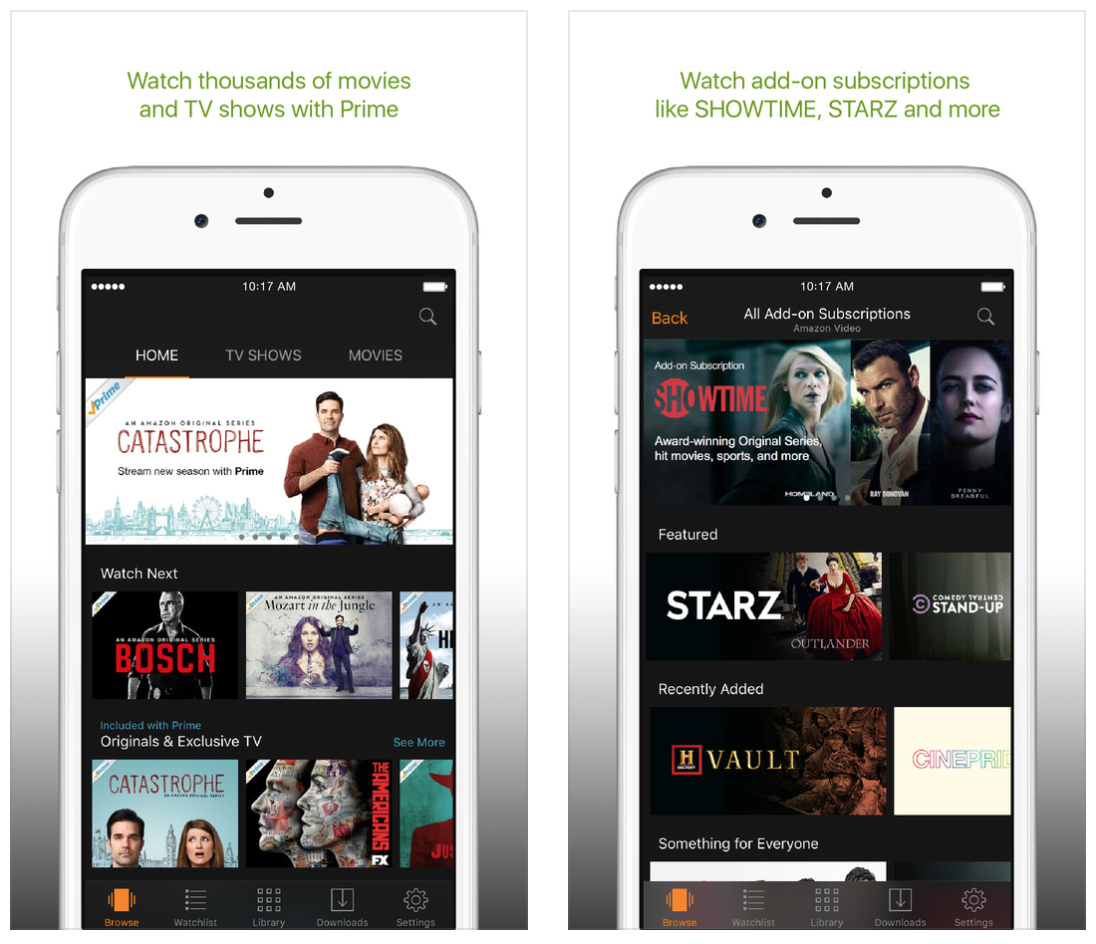 If you have an Amazon Prime membership, you get a lot more than just free two-day shipping. One of the perks is access to the company’s vast array of movie and TV show content. There are hundreds of shows you can watch for free, but there are also a number of titles you can rent or purchase, too. Amazon has been working hard to create new shows that will make you want to sign up to watch. If you have a subscription to Showtime or Starz, you can also stream content directly from within the app. Amazon Prime costs $99 per year. This app is available for free. 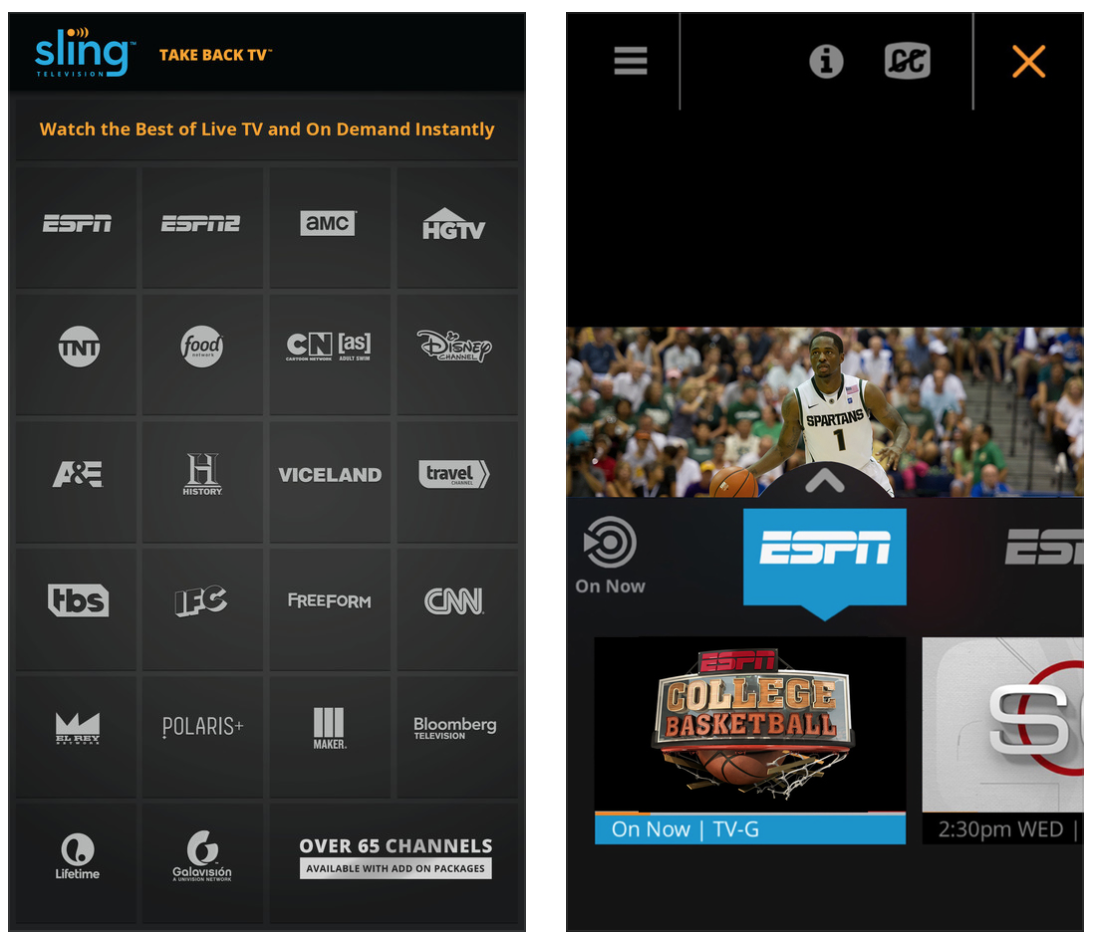 Sling TV offers a great package deal for former cable subscribers. If you still want all of the content you used to get from such channels as ESPN, Cartoon Network, or CNN, you can subscribe to package deals that include some of your favorite channels. You’ll get live TV access to two-dozen basic cable channels, plus you can add additional content packages based on genres like kids, sports, and movies. The basic live TV package costs $20 per month and add-on packages cost $5 per month (HBO costs $15). This app is available for free. 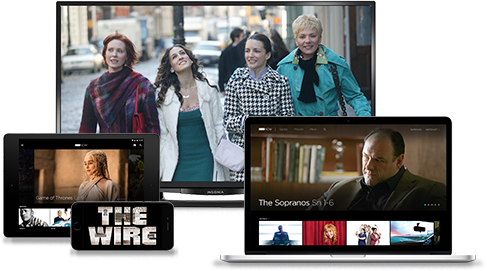 HBO was one of the first cable networks to offer a non-provider subscription to content. With it, users can watch dozens of award wining shows created by the company, including full series access to archived shows, as well as real-time streaming of current episodes from popular titles. You can also watch the same hit movies that cable subscribers watch, critically acclaimed documentaries, World Championship Boxing events, and more. Subscriptions cost $14.99 per month. This app is available for free. 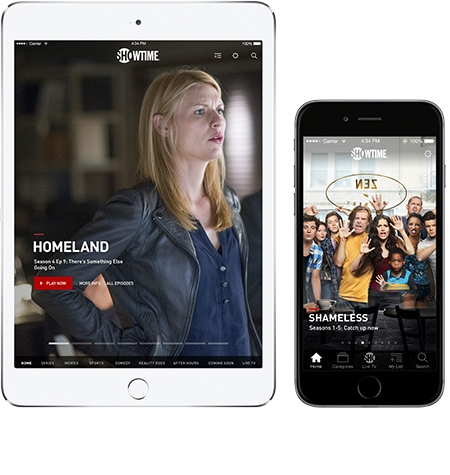 Showtime followed in HBO’s footsteps with its own subscription-based stand-alone app. With it, viewers can watch entire seasons of the network’s vast catalogue of shows, including original content. Watch popular movies, exclusive documentaries, and comedy specials. You’ll also have access to Championship Boxing events and other sport-related shows. Watch full seasons of archived shows, or catch up on current ones in real-time with the live TV feed. Subscriptions cost $10.99 per month. This app is available for free.

One of the biggest hurdles for potential cable cutters is with sports. While it is still not possible to watch live NFL games, with the Game Pass (features vary by location), football fans can replay all 256 season games on-demand starting the day after they air. You can also listen to live game audio, watch 30-minute game summaries, view the game from 22 different end zone angles, and access exclusive commentary, interviews, and game play highlight shows. If you really want to soak in the history of the NFL, watch all games of all seasons dating back to 2009 whenever you want. Subscriptions start at $39.99 per season. This app is available for free. 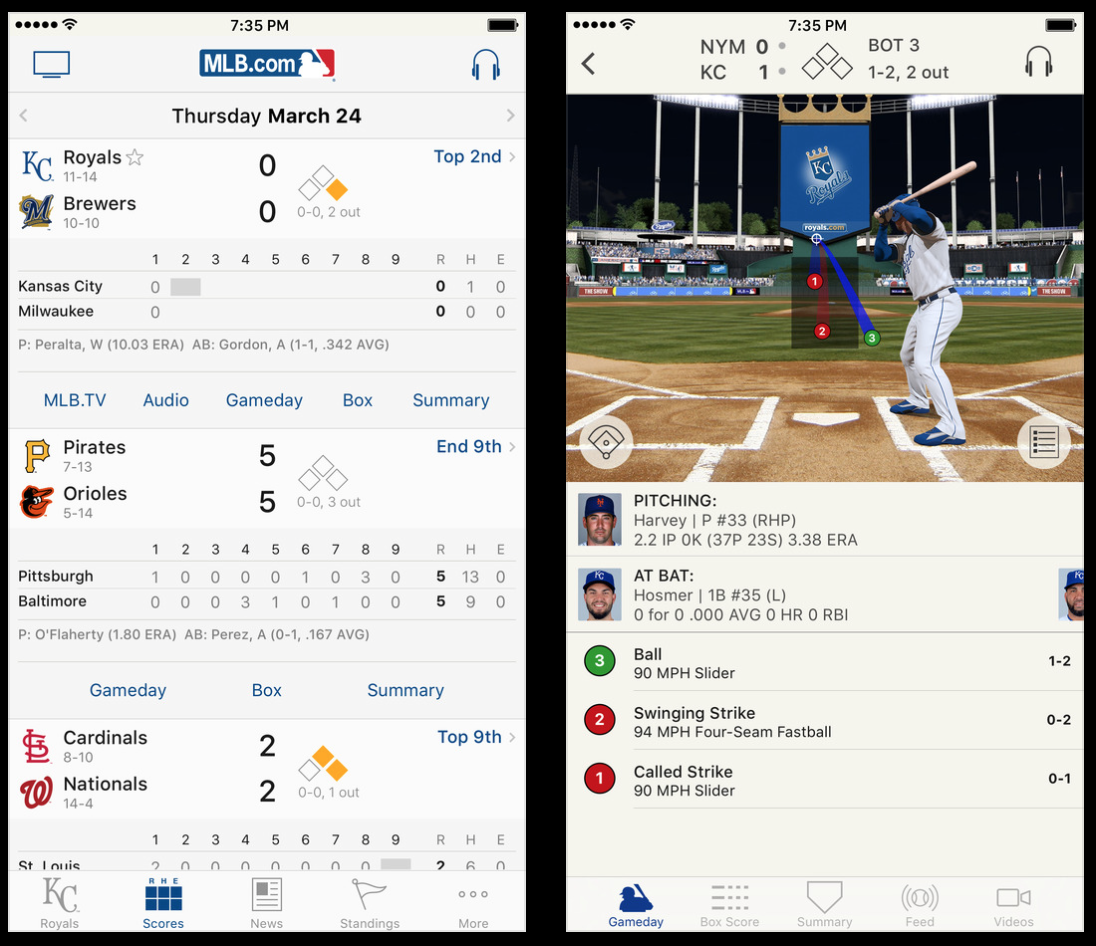 Baseball fans don’t have to be in the outfield to enjoy an exclusive game watching experience. Just like the NFL, live games aren’t yet available without a cable subscription. However, with the At Bat Premium membership, fans can watch any of the 2015 season’s games and post season game content, including full-game video archives and highlights, during the off season. You can listen in real time to live games from the audio broadcast feed. Plus, access the classic games archive where you can watch clips of some of the league’s historical games. Subscriptions cost $2.99 per month, or $19.99 per year. This app is available for free. 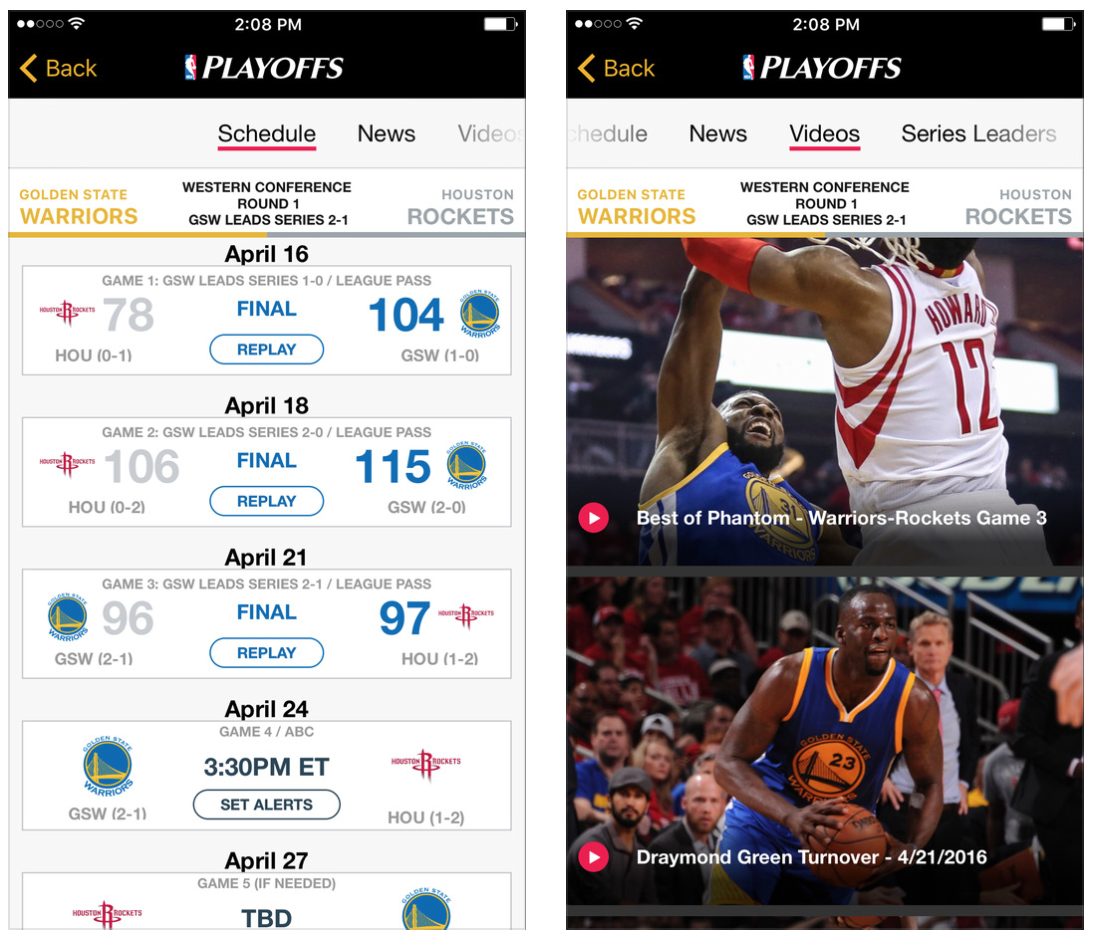 The NBA offers the most valuable access to live content with a $99 League Pass membership (features vary by location). You can watch select preseason and full season games, stream up to four games at once, listen to game announcers for either the home or away team, and more. You can also access the NBA archives to relive classic historical games. If you don’t care about the entire league, you can select a team to follow for $59.99, watch a single game for $6.99, or get audio-only access to all of a season for $9.99. The full League Pass subscription costs $99.99. This app is available for free. 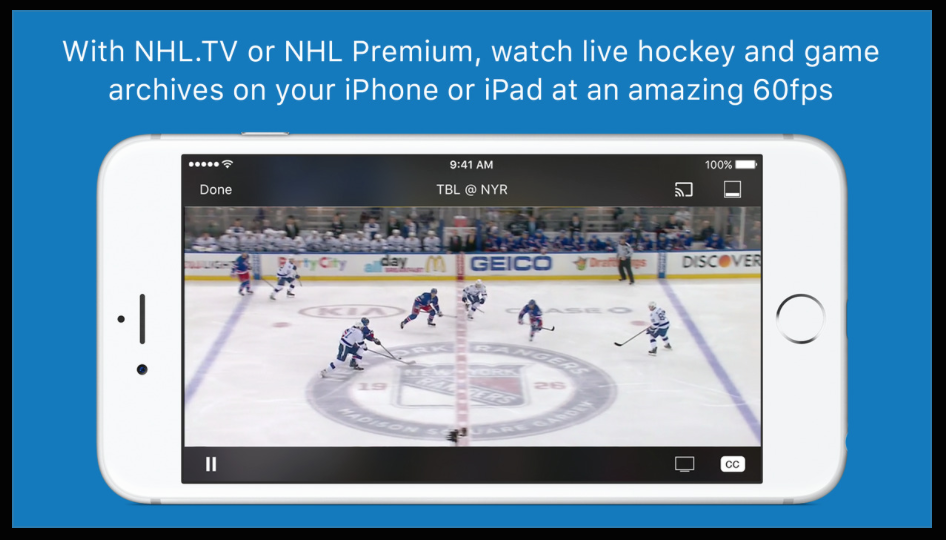 Hockey fans won’t get left on ice with the official app. With GameCenter Live, fans can watch all out-of-market current season games in real time (features vary by location). You can watch the game from the point of view of the home or away team, including announcer broadcasting. Pause and rewind live games, or watch game archives that have special moments tagged with highlight markers. You can stream up to four games at once. If you only want to follow your favorite team, pay $105 per year (make sure games aren’t broadcasting in your area). A full subscription costs $131 per season or $24.99 per month. This app is available for free.

Don’t forget to check out our previous best-of lists.