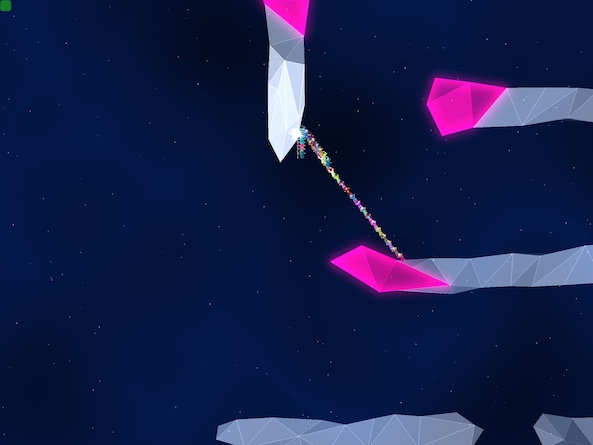 Because I’ve been in the app review business for a few years now, I tend to have a cynical mind when I hear certain words like “endless runner” and “physics-based puzzler.” It’s true that some games will surprise me and rekindle my love of those genres, but I’ve gotten to the point where I start to feel like, if you’ve seen one, you’ve seen them all.

Kiwanuka both adheres to traditional physics-based puzzler games, and breaks from the mold at the same time. Each level offers a new challenge to overcome (traditional), but the game doesn’t feel like the same old thing in a new skin. Its simplicity is actually its positive selling point. Read along for our Kiwanuka review to help you decide if it is something you’d like to try…

The graphics are decidedly cartoonish with a subtle abstract flare. If the game were a painting on canvas, it would belong in Juxtapose magazine. The little people are angular and geometric. The robes they wear hide their mouths. “South Park” might influence the art style a little in that the people, sort of, look like paper cutouts.

That’s when you can see them up close. Most of the time, they are far away on a crystal rock in outer space. Each level places the staff-wielding leader of the pack in charge of getting the entire group of lost citizens from one spot to another to rescue their trapped buddies. The group is always gathered together, right behind the leader and will follow the lightning that emits from the staff, wherever it leads them, including to their death.

Players can perform a few limited functions in order to get from point A to point B, including calling up a lightning bolt to let the group know where to go, as well as creating a stack of people to build a bridge. Don’t worry. Those citizens aren’t harmed in any way. I like to imagine that they are copies of the citizens, but not sentient. So, when the group gets rescued and the “bridge people” are still attached to a crystal platform, they don’t mind being left behind.

Each level features a new challenge involving how to get across wide gaps, avoiding pink and blue crystals that will destroy the group, and figuring out how to maneuver into tight spots to rescue the imprisoned person. 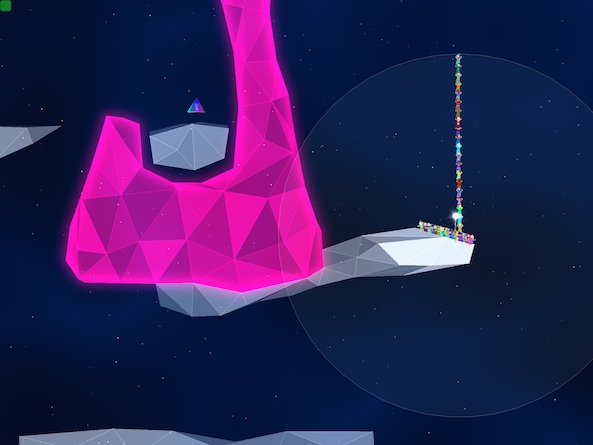 Players control a group of lemming-like people who are led by a dude with a staff. You are in charge of what the staff does, shoot lightning or create stacks of people bridges. To make the group move, direct the lightning bolt to the ledge you want them to drop from. Make sure there is a platform below, because these citizens don’t watch where they are going and will fall right into the abyss if you tell them to. You can always create a bridge out of people to help get the group across a gap that has no platform below. That is, if there is a way to create a bridge that won’t be destroyed by the pink or blue crystals.

The goal is to get to the prism, which is usually located in some difficult-to-reach spot. Figure out how to get from the starting point to the ending point by performing only a few actions.

On any given level, players must create a bridge by dragging lighting directly upward from the staff. You can make the bridge as long as you want. A circle will appear to let you know the bridge’s radius when it falls. This is good for knowing how many people you’ll need to reach a platform without hitting something above or below. After you stack the people, topple them over by swiping to the left or right. The stack will rotate downward and stick to the first available platform, creating a bridge that the rest of the group can walk across. If you make the bridge too long, it might touch a pink or blue crystal, which will destroy it. If you make it too short, it might attach itself to the wrong platform and you will have to try again.

In addition to directing the group with lightning bolts and creating bridges to cross over, players can make a bridge disappear while the citizens are walking across it. To remove the bridge, double tap it. Why would you want to cause the little people to fall while they are walking across a bridge? Because sometimes, there is no platform directly below you, but there is one a few feet away.

When your group makes it to the end prism, a new citizen will be rescued and he or she will be then next one in line to hold the staff.

Every level has a new, interesting challenge. Players must use their wits and puzzle solving skills to figure out how to rescue their friends. 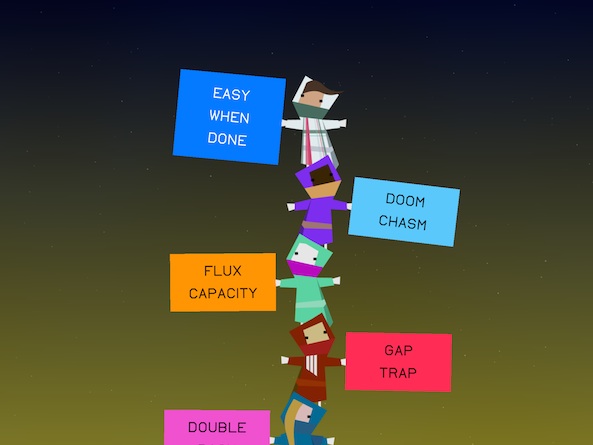 I found the game mechanics to be quite unique. While the overall concept is the same as a traditional physics-based puzzle game, this one offers something different that is simple, but engaging.

There is no hint system. If you get stuck, you are stuck. You can’t skip levels or get help with a particularly difficult puzzle. You just have to keep playing until you figure it out.

Kiwanuka costs $1.99. The game is very interesting and unique. It offers hours of gameplay. I don’t know how many levels there are, but based on the achievement list, I’d guess there are at least 30. The price is reasonable for the fun you have while playing, but the replay value is very low. You don’t earn points for speed or creativeness, so once you get through a level, there is no reason to replay it.

This is a definite win for fans of the physics-based puzzle genre. It is fun, has good-looking artistic graphics, and has a unique style to it. The price is reasonable for what you get, but it loses replay value pretty quickly. If you like games that challenge your puzzle solving skills, you will probably want to check this game out. It is available on the iPad, iPhone, and iPod touch. Download it in the App Store today.

God of Light is a physics-based puzzler that uses lightning. Once Upon a Light is a pretty fun game in the genre.

Are you excited about Kiwanuka? Let us know in the comments.