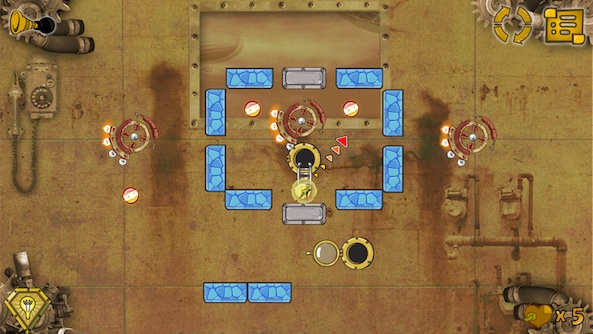 I’ve tested dozens of physics-based casual games. Some of them are so hard I don’t like to play them. Others are so simple I get bored. Finding a middle ground isn’t as easy as it sounds. I guess I’m the baby bear of the app testing world.

Once Upon a Light is a pleasantly surprising casual game that requires you to think ahead to your next move, but doesn’t require precise aim or timing skills so you can enjoy a challenge without ripping your hair out from frustration…

The game’s theme is a bit of Steam Punk and a bit of cartoon animation. The beginning cinematic shows a mustached cowboy who is trying to save his ladylove from being carted off to another electronic environment. Once separated, the brightly lit “Eddie” is determined to plug into the right outlet to save his beloved. It is your job to help him reach her.

Each level features one entrance portal, a handful of light sockets, some metal and glass walls, three energy coins, and the exit portal. Players fling Eddie from one socket to the next, bouncing off of walls and collecting energy along the way.

Each socket can only be activated a specific number of times. That is, Eddie can only plug in to the same socket so many times. When a socket is all used up, the light bulbs attached to it will go dark.

The game has seven worlds that are represented by seven sections of a balloon-powered airship. The different worlds have different backgrounds and increasingly challenging puzzles. 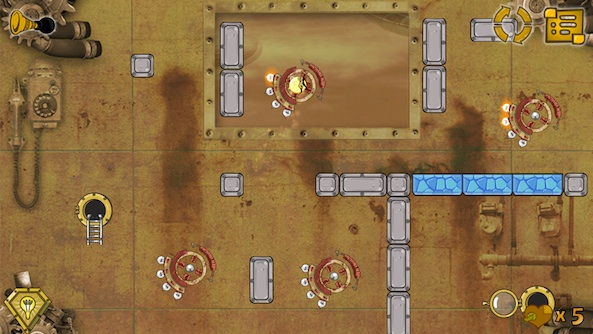 The goal of this game is to get from the starting portal to the ending portal on each level. Collecting energy along the way will help you earn extra points. The game isn’t timed, so you can take as long as you want to figure out the best plan of attack.

Players start at the first portal and must get to a nearby socket. To launch Eddie, touch the screen where he is and drag your finger behind him. This will create a target line in front of Eddie, which will help you aim for the next socket. When you let go of the screen, he will fling to the target. Sometimes, there are obstacles in the way, like walls, which keep you from getting directly to the next socket. Sometimes, you will need to aim your shot so that Eddie bounces off of different walls and lands in a socket. Other times, you will need to break through glass walls and re-send Eddie to his next landing spot.

There are also various switches and knobs that you must turn on or off by flinging Eddie past or into them. For example, there is an electric springboard that automatically flings Eddie across the room at a certain angle. To rotate the spring so that it faces a different direction, fling Eddie across its corresponding switch and it will rotate to the new position.

Along the way, players should try to collect energy coins. There are three on each level. When you collect them all, you will receive the maximum points. Oftentimes, the path to all three energy coins is significantly more difficult than the path directly to the exit. But don’t take the easy route. The fun is in the challenge. 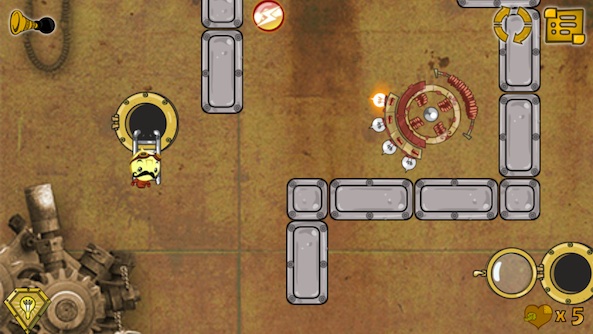 Casual physics-based puzzle games tend to either be way too hard, or so repetitive that it gets boring fairly fast. This game has just enough challenge to keep you interested, without being so hard you give up.

The game’s tutorial or how-to is very vague. There are no words, so you have to rely on an animated pointing finger to understand new game mechanics. While it wasn’t difficult to figure out what the finger was pointing at, I’d like a bit more clarity on the rules and mechanics.

Once Upon a Light costs $0.99. That is the perfect price for a game of this caliber. There are almost 50 levels across seven different worlds and no in-app purchases to make you spend more money.

Fans of physics-based games will feel right at home with this title. It is not going to win any awards for innovation, but it is a fun and entertaining game that will keep you occupied for at least a few hours. Not bad for only a buck. This app is available for the iPhone, iPad, and iPod touch. Download it in the App Store today.