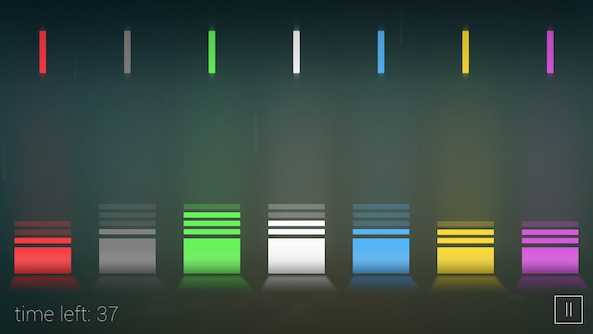 … and then it rained is a simple game that features the calming sound of rainfall, but requires fast reflexes, which is the opposite of how you feel while relaxing to the Zen-like soundtrack…

This is a minimalist game. The screen consists of seven towers of different colors. Each tower has a group of faded lines at the top. These lines are representations of the empty portion of the tower. The goal is to collect colored drops that fall from the sky on a matching tower. As the drops are collected, the faded lines fill with color. If you accidentally catch the wrong color in a tower, the solid section shrinks.

Small colored lines drop down vertically, representing raindrops. Sometimes one or two fall at once. Other times, all seven colors drop from the sky at the same time.

Players catch the colored drops with the matching tower by dragging it across the screen. The goal is to have the tower in place before the droplet hits it. At first, it is easy to catch the right color with the right tower, but as levels progress, drops come faster and fall more often.

The entire time you are playing the game, a subtle rainfall is happening in the background. As the game continues, a storm begins to build. Every once in a while, the faint sound of thunder can be heard and storm clouds appear in the background.

In addition to the relaxing sound of rainfall, each drop of color makes sound as it falls and each tower makes a complimentary noise when it is moved. 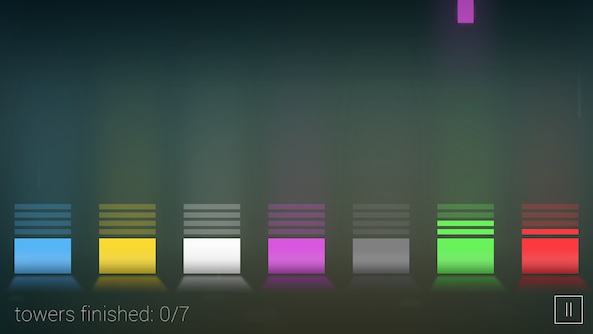 The point of the game is to catch the raindrops by moving the towers into the correct position. Each level has a different goal. On one level, players must catch 35 drops. On another, players must survive for 30 seconds. Although the mechanics are the same, the end result is always different.

There are three modes of gameplay, normal, hurricane and quick play. In normal mode, players progress one level at a time, by completing different challenges. Hurricane mode is harder and can’t be unlocked until you’ve finished all levels in normal mode. Quick play requires players to fill each tower with color. All towers start out at about one quarter full. Capture droplets to fill the tower. When one is finished, no more colors from that tower will fall. Interestingly, quick play takes longer than a single level in normal play.

When you start the game, you will play a tutorial level that explains how to drag the towers to collect colored drops. Then, you will be required to collect a certain number of drops. The first five levels are fairly easy and subsequent levels grow increasingly harder.

While the game seems relaxing at first, it doesn’t take long for it to become a real challenge to your reflexes. Luckily, your brain doesn’t have to work as hard as your fingers do, so you can still let your mind meditate while your reflexes are working. 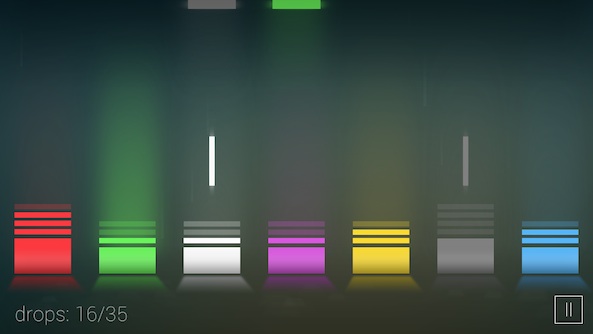 I found the soundtrack to be the most appealing part of the game. That’s not to say that the actual game part isn’t great. However, I really sank into a comfortable playing state as soon as I heard the rainfall.

The gameplay is very smooth and the design takes advantage of the iOS touch screen aesthetic nicely.

Portrait mode would be nice. You could then truly play one-handed by reaching your thumb across the screen to move a tower from one side to the other. In landscape mode, my thumb does not stretch that far and I have to use both hands to play.

… and then it rained costs $1.99. I would have expected it to fall under the $0.99 range. However, these days, $0.99 is the new “free” and people still have to buy in-app items to continue. This game doesn’t have any additional items for sale, so you won’t feel cheated. The replay value isn’t particularly high because you don’t get anything new for replaying a level. You are scored by your performance, though. So you could find yourself replaying levels to get the highest score in Game Center.

I liked this game and found it to be very relaxing to play. However, at the price, I’d recommend it mainly for fans of simple arcade style games. This has an emphasis on touch screen experience and is not the least bit action packed. However, it does an excellent job of challenging your reflexes. This game is available on the iPhone, iPad, and iPod touch. Download it in the App Store today.

har.mo.ny is another game with a calming soundtrack. Lyne has a minimalist design but features brain challenging puzzles.

What do you think of … and then it rained?