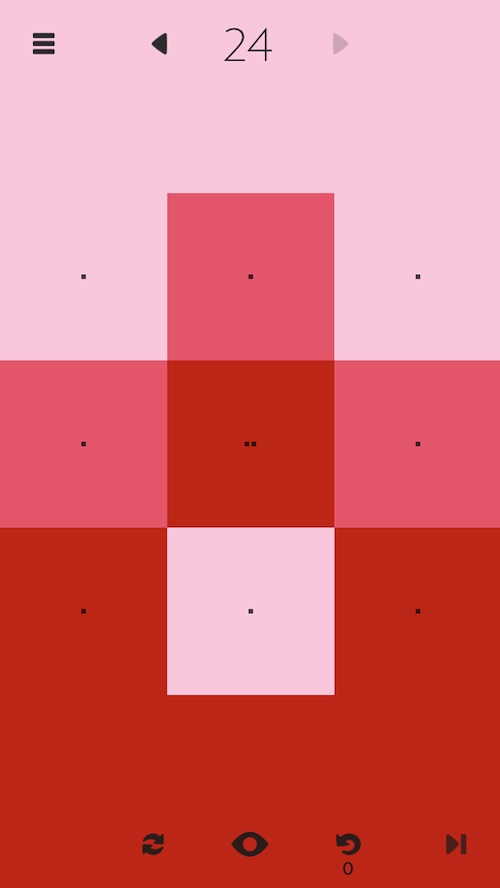 Once iOS 7 was announced, developers were on the ball, designing new apps and games with a flatter, brighter design. Quite a few puzzle games have seen huge success as iOS users flocked to the attractive looking design.

BorderLeap’s newest app, har.mo.ny is an iOS 7 inspired puzzle game that is both challenging and pleasant to play. You won’t be flinging birds at pigs with a peppy soundtrack in this game. You’ll be calmly flipping blocks to the zen-like calm of ambient music…

Colorful and flat. That is the simplest way to describe a game with such a minimalistic design. The font is clean. The board is colorful. The options are simple. The game is complex.

Each board has three or four colors of blocks that must be matched in a specific pattern. Some blocks can only move once. Others must move twice. Some must move three times before the puzzle is solved. The number of moves is represented by dots in the center of each block.

There are four options at the bottom of the screen. Restart the puzzle, view the pattern, undo a move, or skip to the next puzzle with the available options. You start your game with five undo moves. After that, you’ll have to pay $0.99 for 10 more. The skip button is unavailable without purchasing it for $6.99 (they really don’t want you to skip levels). You can restart a puzzle as many times as you like. You can view the pattern as often as needed.

There is no way to choose a specific level, but you can replay all levels that you’ve completed by tapping the back button at the top of the screen. You can reset the game to beginning by accessing the Settings section in the main menu. 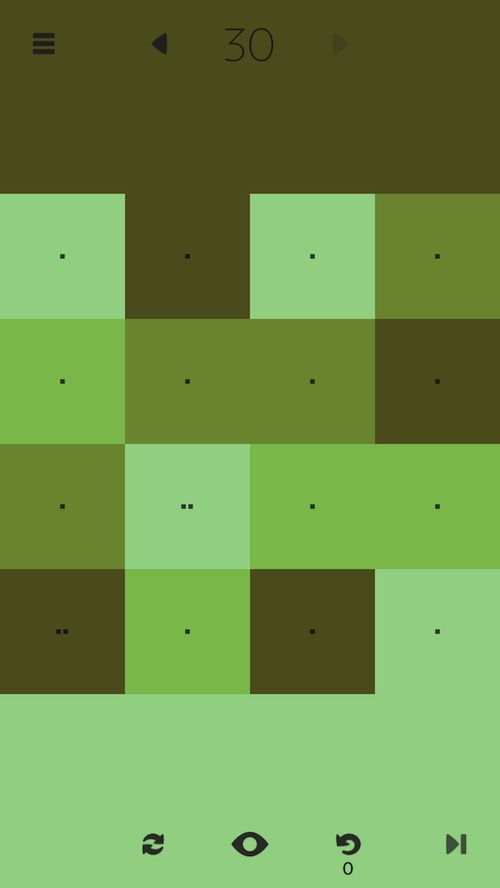 The goal of the game is to line up the blocks into a pattern. Patterns are always rows of matching colors, but which row is supposed to be which color is unknown. If you want a hint, tap the eyeball at the bottom of the screen to reveal the pattern. Then, you’ll know which colors go where. The next step is figuring out how to get the blocks to their rows.

Some blocks can only be moved once. If you moved a block to its correct final position, you will see a check mark. If you moved a block to the wrong spot, an “X” will appear instead. You can either undo the move, or reset the level. You only get five undo moves before you have to pay for more. I highly suggest holding onto them. The game is very confusing at first and you’ll want to use the undo button, but try to resist.

Instead of using the undo button, tap the reveal pattern button. Knowing where each color is supposed to be will help immensely.

When blocks have two or more dots on them, it means you must move the block that many times. For example, if you have three dots, the block must be moved three times before it is considered at its final spot. This is not an option. There are some puzzles that have multiple blocks with multiple dots, and it seems like there is nowhere to move them, but there always is. The trick is finding out what those moves are.

The game features a soundtrack of ambient music to keep you relaxed while playing. There is no time limit on levels and you don’t earn any points. The game is designed to keep your brain occupied while letting you calm you mind. 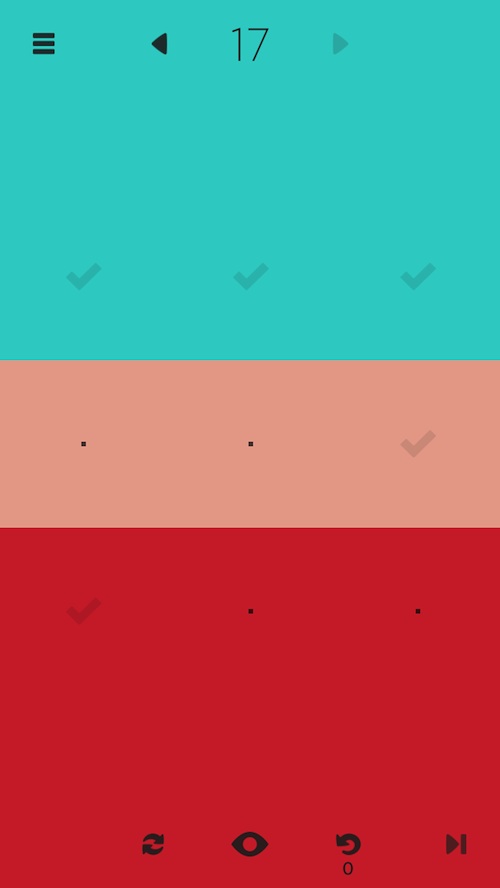 I love how relaxing it is to play this game. There are so many apps that are so intense they make my palms sweat. I’ve been tempted to throw my iPhone at the wall before. This game keeps you calm while giving you challenges to energize your brain.

Each puzzle has a different set of colors. I found myself anxiously awaiting new colors to see how they looked. It keeps the game interesting.

The tutorial is too vague. I ended up wasting all five of my undo moves because I didn’t quite understand the point of the game at first. There should be a comprehensive guide that explains the goal of each puzzle and goes into more detail about what players should do.

The game seemed too easy until about the 30th level. I’d like to see the challenges ramped up a bit sooner. Maybe there could be different modes of difficulty.

Har.mo.ny is available for $0.99. That is just about right for a game like this. There are more than 100 puzzles, so you are getting a pretty good bargain for your buck. While the game features in-app purchases, they are far from necessary. I wasted all of my undo moves within the first three levels and never wished for them back. Not having an undo option just made me work harder to get the puzzle solved the first time.

I highly recommend this game to anyone who likes puzzle challenges. It is simplistic in looks, but complex in action. There are plenty of levels to keep you occupied and the board gets harder as you play. This game is available for the iPhone, iPad, and iPod touch. Download it in the App Store today.

Flow Colors has a similar colorful puzzle theme. Stickets is also very similar, but the difficulty level is much higher. Mosaique is also a minimalist puzzle game for your enjoyment.

Do you enjoy puzzle games? What is your favorite so far? Do you prefer super challenging games or simple games with easy solutions?